iLoveKickboxing opened their second St. Louis area studio late this fall in Creve Coeur and as their Grand Opening approached, they offered amazing deals to draw new members in.  A co-worker and I decided to take advantage of one of their amazing deals which was five classes (a $75 value) + boxing gloves (a $45 value) for only $15.

Your orientation class is the first of your five classes, and we scheduled our orientation for Saturday, November 10.  In this class staff give you a tour of the studio, explain the class format, and really break down the basics of kickboxing.  What I LOVED about the orientation class was how they broke down the proper form and footwork for every move.  For example, I knew what an uppercut was but only because I watched my brother playing the Mortal Combat video game growing up.  I had no idea where you should be hitting the bag for a proper uppercut and that your feet were supposed to pivot as you punched the bag.  I also didn't realize that your other arm should be defending your face/head while you are throwing that uppercut.

Here are some of the pictures I took during our first tour of the studio: 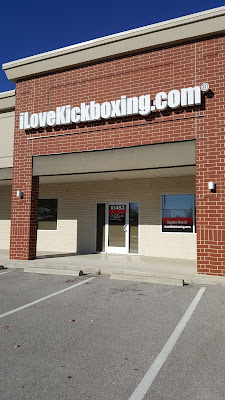 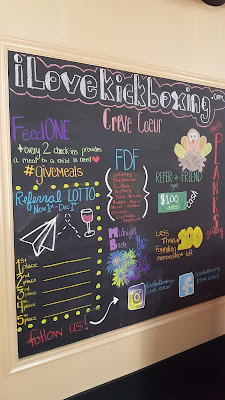 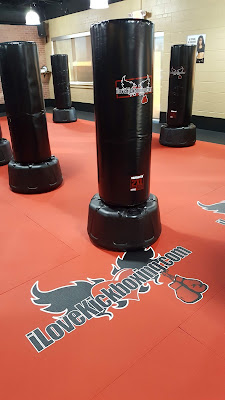 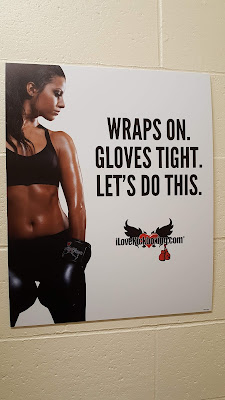 Here is what you can expect from start to finish in their own words:

The instructors will show you how to wrap your hands like a real kickboxing pro, but you’ll be hitting bags instead of people. You'll meet the squad, strap on the gloves and get right to business, calorie burning business that is.

Designed to get your heart rate up, the music kicks you into full gear. Each day, you’ll run a little faster, jump a little higher and even squat a little lower with the help of a variety of cardio exercises you’ll grow to love. Instructors join you on the mat and guide you to ensure good form and provide modifications if needed. Before you know it, the warm up is over and you’re anxiously waiting for whatever comes next.

With your muscles warmed up this is the perfect opportunity to get them nice and loose. You’ll need it to avoid cramping and get those kicks nice and high.

Did you know resistance training helps you burn more calories? Instructors teach you easy to learn punch and kick combos that real fighters use in the ring. You’ll let out the stresses of your day while learning self defense and hand eye coordination. It’s the full package of working out and all you gotta do is beat up the bag. Not bad right?

Here the instructor helps you get your heart rate back to normal by guiding you through a series of stretches. You’ll close out class by giving a fitness tip to incorporate into your lifestyle outside of the studio too. Plus, as you stretch you can settle your mind and think of your battle cry for the next class!

After burning around 1000 calories by the end of the workout, you’ll be drenched in sweat, and chomping at the bit to do it all over again!


My co-worker and I completed our 5th class on December 10 and after five classes I can say that even though the format is the same, every class is different.  The only thing that really stayed the same was the fact that there was jogging around the studio during warm up.  All other warm up, bag work, and partner work moves were different.


I enjoyed the camaraderie both during class and in the locker room after class (those conversations were the best).  We worked hard but also laughed quite a bit, especially when my co-worker and I would both get lost in the combinations, which happened multiple times per class.  I learned a lot during the orientation class and then at each class thereafter, the instructors really broke down every move: where on the bag you should punch, where the force of the punch is coming from, what your feet should be doing, how to reset for a roundhouse, etc.  Even though I had taken boxing and  kickboxing classes before, I had NEVER had the moves explained to me in this way.  I still have a tendency to get lost when there are more than a couple moves per combination, but at least I became very cognizant of my form during the combinations.  I can't remember how I even came across the package deal for iLoveKickboxing, but am really glad that we were able to take advantage of it and learn something new in the process.
Posted by Bree at 7:41 PM