My fitness wing-woman (the Pure Barre enthusiast) and I recently purchased a Groupon for four classes at Shred415 - Creve Coeur, which opened earlier this year.  I first heard about Shred415 through the Class Pass app, which I discovered in October 2016.  I honestly would not have found out about Shred415 had it not been for Class Pass.

Their first location in the St. Louis area was in Brentwood, just south of the I-170 and I-64/40 interchange.  The Brentwood studio is not near my home and this area is notorious for traffic, but I had one Friday afternoon off from work that October so I decided to sign up for my first class.  Since I was able to make it to a 3 p.m. class, it was not as packed as their pre-work and post-work classes tend to be.  The instructor took plenty of time explaining the class format as well as showing me how to work the Woodway treadmills.  After that first class I was exhausted, but excited to return.  I liked it so much that I purchased the New Shredder Unlimited Month.

Fast forward to 2018 when I learned that Shred415 was opening a Creve Coeur location, which is near my home and where I work.  I was so excited!  As soon as I saw that Shred415 was offering a four pack through Groupon, my wing-woman and I each purchased one for $39.  Our first class was on Thanksgiving and little did we know that our first class was actually FREE!  We showed up early so that we could get a tour of the studio and here are some of the pictures I took: 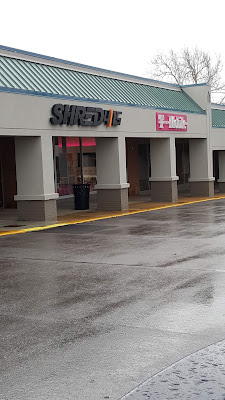 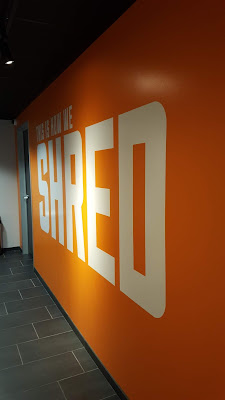 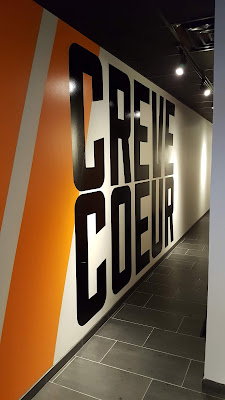 What is provided (other than a great workout):

Class Format and What to Expect:

Shred415 started as four, 15-minute intervals of high intensity interval training with two intervals on the treadmills and two on the floor or "decks."  Some classes have different durations for the intervals, but all will add up to 60 minutes of work.  Your instructor will explain the duration of each interval as well as the treadmill inclines at the beginning of class so that you always know what to expect. I always try to start on the treadmills (just personal preference), but the class is split between treadmills and the decks.  The instructor leads the two groups through their workouts simultaneously.

For the treadmills, your first few minutes of class are spent trying to find your "ending warm up pace" which is defined as a pace you can easily sustain for 15 minutes.  You will want to remember this number because the remainder of the treadmill work builds on this pace, meaning you end up running faster than that pace or walking at a higher incline if you are a walker.

Meanwhile, the people on the decks are working their way through a dynamic warm-up and stretches before being led into their workout.  Each class totally depends on the theme of the workout: Total Body, Butt & Legs, or Arms & Abs.  I have been in classes where the treadmill inclines don't exceed 3% and others that go up to 6%, again it just depends.

After the first interval is complete, you switch.  Decks to treads and treads to decks and then you work your way through what the other group just completed.  The instructor explains and demonstrates everything again, so no need to memorize what they are doing on the decks while you are on the treadmill.  Just stay in the present and focus on yourself and listen to the instructor. Now I will admit that I can't physically do everything the instructor demonstrates during floor work, but they will always offer modifications.  Just listen to your body and don't worry about what the other people in the room are doing or how quickly they are doing it.

After you have completed your first interval on both the treads and the decks, you switch back to where you began.  The switching happens quickly and you pretty much jump right into to the second round but before you know it, class is over and it's time to stretch. Now this is just my body, but I burned at least 800 calories at each class according to my Polar heart rate monitor.  Of course I loved the calorie burn, but I also loved the variety on the treadmills and the decks.  The music was so great that I wanted to dance, but it also kept you motivated and moving.  Now that my package is up, I plan to attend classes at Shred415 through Class Pass for now and maybe purchase another package down the road.  I really enjoyed my time there and look forward to coming back soon.

Shred415 continues to expand, so you can click here to find a location near you.

Email ThisBlogThis!Share to TwitterShare to FacebookShare to Pinterest
Labels: Adventures with Groupon