Our weekend in Phoenix didn't go according to my original plan due to my bronchitis, but we still managed to do a lot and had an amazing time.

FRIDAY
We arrived in Phoenix at 9:00 a.m. on Friday, January 12 and immediately picked up the rental car.  The race expo did not open until Noon, so we went to Papago Park and took a short hike up to Hole in the Rock. 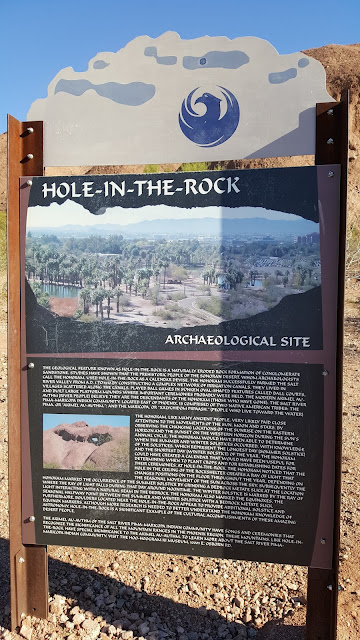 After our amazing hike, we went to In-N-Out Burger for lunch since we don't have any locations in the Midwest.  I had read that you could get their burgers in a lettuce wrap instead of a bread bun, so that is what I ordered while my husband opted for the regular bun.  I have had better burgers in the past, but the In-N-Out burger in a lettuce wrap was definitely delicious! 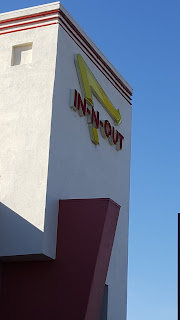 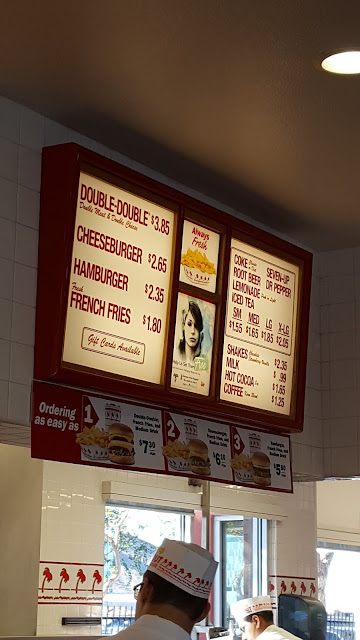 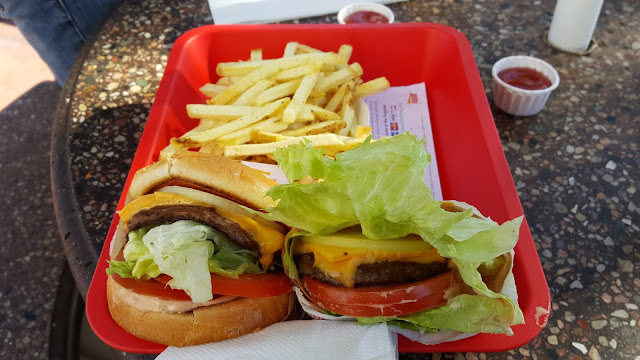 After lunch, we drove to downtown Phoenix for the expo.  I didn't really take pictures at the expo since we were in and out so quickly.  We walked up and down all the aisles, but I didn't stop at any of the booths.  I just felt like I had seen all the products at other expos and there wasn't anything new that caught my eye.  Since we could not check into our AirBnB until 3:00 p.m., we opted to sit outside the convention center in the sunshine and amazing temperature and just people watch.  What I love about races (especially large ones like Rock 'n' Roll races), is that you see runners of all shapes and sizes, ages, and ethnicities.  Everyone has a different story and a different reason for running.  You see a lot of shirts from other races being worn too, which resulted in me Googling a few and mentally adding some to my bucket list (The Lost Dutchman Half Marathon).

From the expo, we picked up groceries and checked into our AirBnb.  This was our first experience with AirBnB and we opted for the Private Room option which means that you share common spaces like the kitchen and living room with your hosts, but have your own bedroom and bathroom.  My boss has used AirBnB outside of the U.S. and she strongly encouraged us to read the reviews before selecting an AirBnb.  Not only was the location of this AirBnB perfect for everything we wanted to do, but the reviews were also stellar and the hosts just sounded like so much fun.  They also had two dogs, which my husband fell in love with. 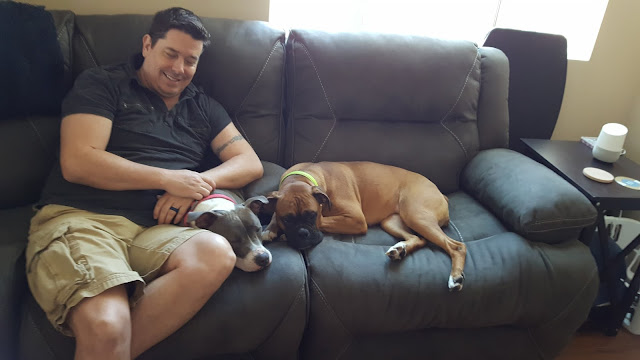 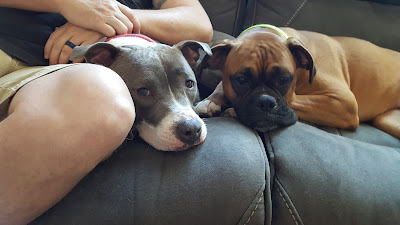 Friday night we had dinner with my cousin who lives in Phoenix and would be running the half marathon with me.  We suggested a place called Rustler's Rooste, which had come up in a list of top 10 restaurants of Phoenix that I found. Surprisingly, my cousin hadn't ever been there before so she was up for trying something new.  The restaurant is western-themed, has large portions, and has amazing views from the top of a hill overlooking the Phoenix area.  Dan and I had decided in advance that we wanted to order the Cowboy Stuff, which would give us a sampling of nearly everything on the menu. 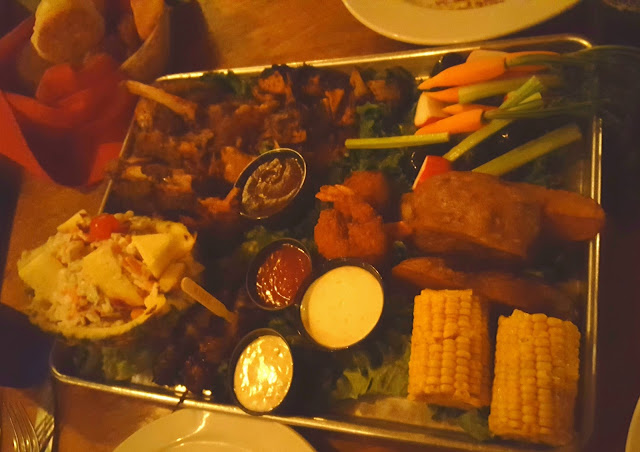 SATURDAY
My original plans for Saturday included a hike that had to be cancelled due to my bronchitis.  Instead, we opted to be totally lazy and sleep in.  We lounged around until it was time to head to the Arizona State University vs. Oregon basketball game.  This event didn't really come onto my radar until they were suddenly ranked in the top 20 in the country.  Tickets were still available, so I snagged two at a good price through VividSeats.  Parking was a breeze and we arrived early in order to catch all the pre-game excitement. 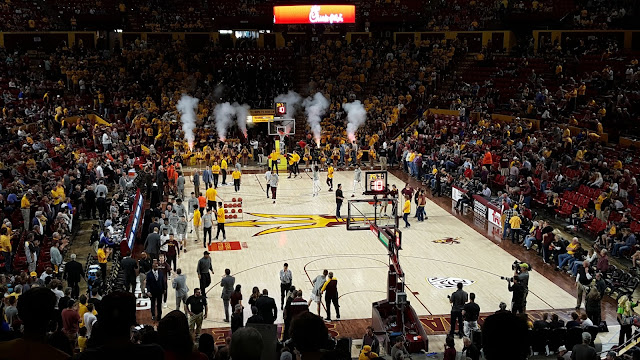 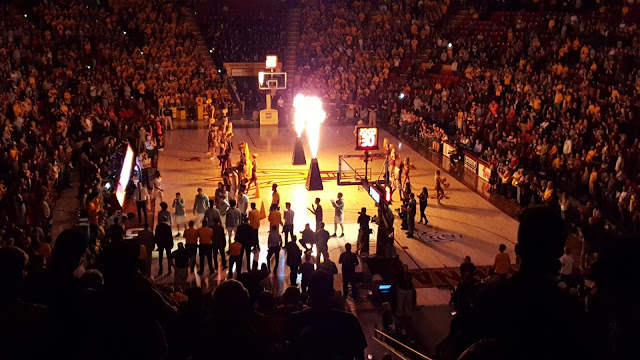 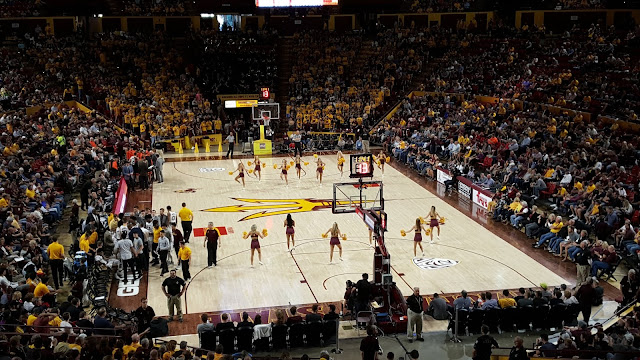 The Beavers managed to pull ahead, but the Sun Devils fought until the very end and ended up winning.  It was a great game and I was so glad that we were able to fit it into our weekend.  After the game, we headed back to our AirBnB to make pasta and relax.

SUNDAY
Our AirBnB was located in a neighborhood that would be affected by road closures on race day, so I got up extra early in order to get proper caffeination before the roads closed.  I found a drive-through coffee place that opened at 5 a.m. called Dutch Brothers.  I ordered my iced tea and they saw my race bib and asked me about the race, which would be running right by this location.  Because it was still dark out when I placed my order, I didn't realize it until after the race that they had written "good luck" on my cup. 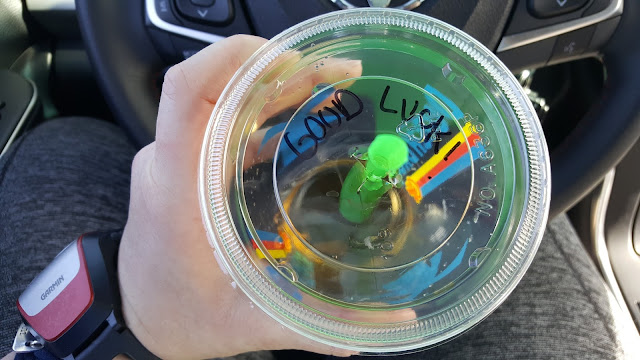 The majority of the morning was spent at the Rock 'n' Roll - Arizona half marathon which I already posted about here.  This half marathon was my 47th and I also got to celebrate the last day of my z-pack!  Before I knew I would be sick on race day and be forced to walk most of the course, I had scheduled post-race recovery cryotherapy, cryo facial, and a Normatec session at Chillfit Cryo in Tempe.  I started with the Normatec session, which is basically compression therapy for your legs and feet.  There were tv's visible from anywhere you sat in the room, so the 30 minutes passed quickly and felt great! 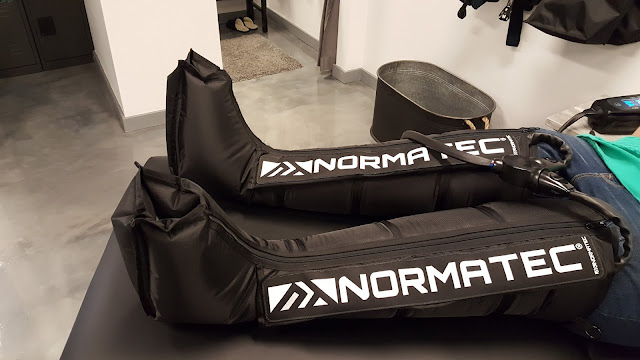 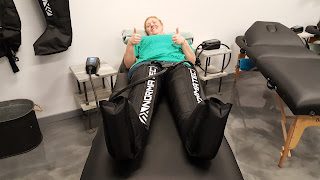 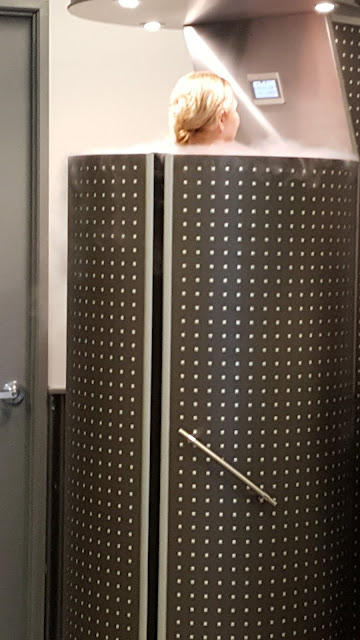 From Chillfit Cryo, we went straight to the Phoenix Suns vs. Indianapolis Pacers game.  Downtown was quiet since it was a Sunday evening, but it was still beautiful with all the palm trees and well-manicured landscaping.  It also seemed really safe and was well-patrolled by the police. 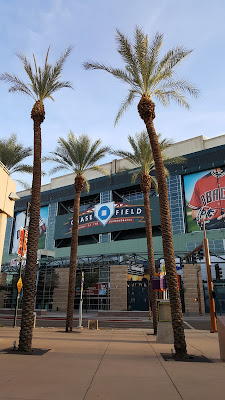 I have only ever been to one NBA game in my life and I was bored out of my mind.  I just prefer college basketball, but my husband hadn't ever been to a game so we decided to see the Suns while we were in town.  As both teams were warming up on the courts, my husband made a friend with another Suns fan as he watched the NFL playoffs on his phone.  Multi-tasking he says....

Since we saved so much money with AirBnB, we opted for seats in the 15th row which were roughly $115 each. 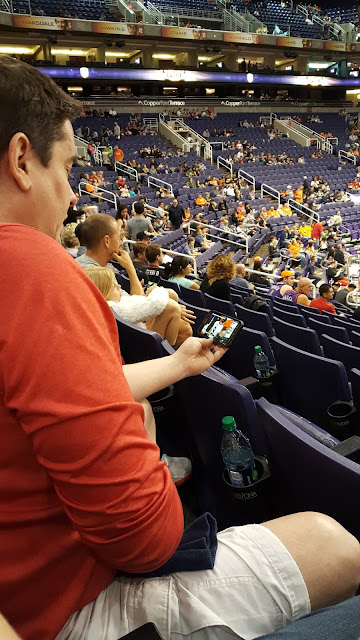 The game wasn't sold out, but it was still loud and exciting right from the start. 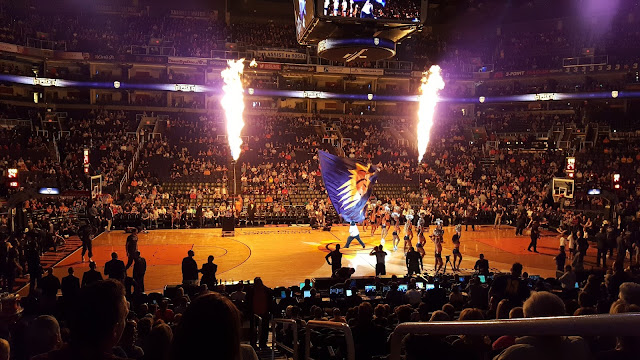 The team mascot is a gorilla and it was his birthday that day, so there were a lot of fun activities during time outs and over half time that involved the mascot.  I don't think I have ever laughed that much at a basketball game, so it was obviously very entertaining.  They brought in the mascots for all of Phoenix's professional sports teams as well as the mascot for the Toronto Raptors and Milwaukee Bucks.  I was never bored during this game, so it must have just been the teams I was watching the last time I went to an NBA game.  Be sure to check out a Phoenix Suns game if you are ever in town! 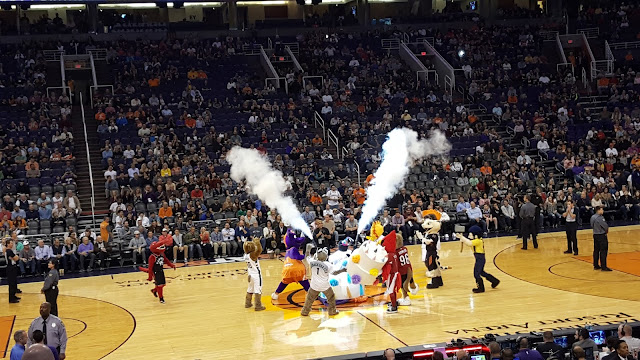 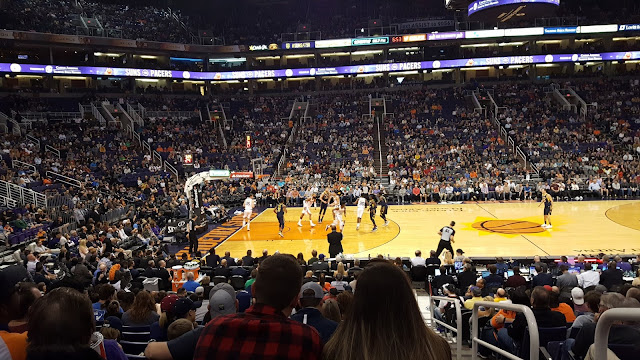 MONDAY
Monday again was a day for lounging and sleeping in.  We ate lunch with some of my other Phoenix-area family members at a restaurant called Four Peaks Brewing Company.  It had outside seating, which was ideal for a glorious January day in Phoenix.  I'm not a beer drinker, but the food was really good. 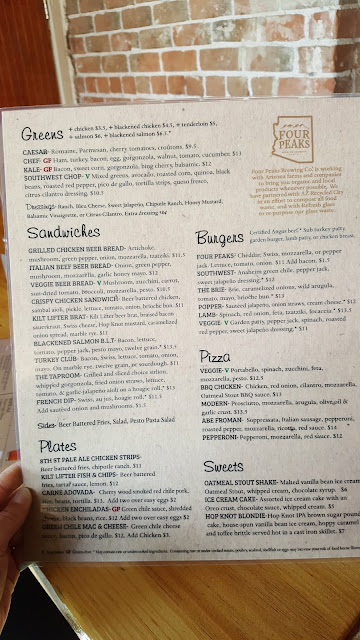 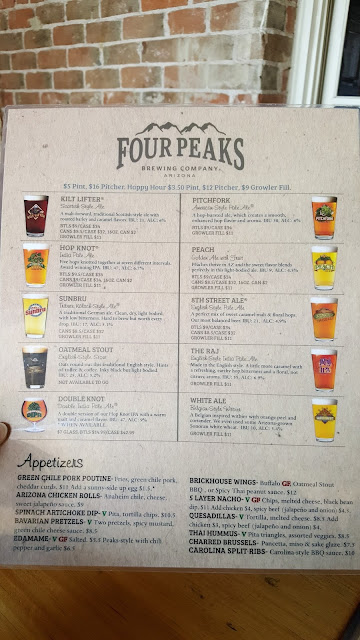 Continuing our lazy day, we went saw a movie at the AMC movie theater in downtown Tempe followed by an ice cream sandwich from Slickables.


TUESDAY
Tuesday was the day the amazing temps and sunshine ended, because we flew back to St. Louis.  It was below freezing when we landed and I was so exhausted from bronchitis and the resulting lack of sleep, that I pretty much crashed as soon as we got home.  Although we didn't do everything I wanted to fit in over the weekend, we still had an amazing time and are already talking about when we should go back. There are so many other half marathons in Arizona that are now on my list that I know we will be back, specifically for another runcation.
Posted by Bree at 8:39 PM