We had our wedding reception in my hometown in Central Illinois on June 3.  Knowing that weekend would be stressful, I took the following Monday off of work and signed up for a cat yoga class at Five Acres Animal Shelter in St. Charles, MO at 12:30 p.m.

This was the first time I had ever been to Five Acres Animal Shelter, and I was very impressed with their campus.  Cat yoga is scheduled only on Mondays because Five Acres is closed to the public that day. 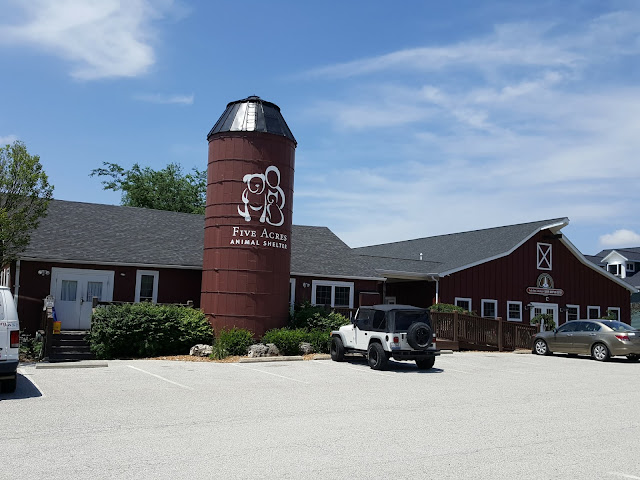 The class was held in a building that only houses cats.  There were signs on the other buildings to guide you there. 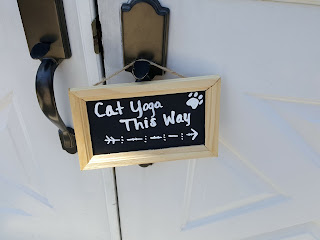 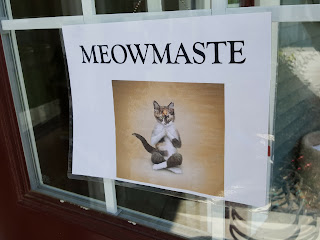 I arrived shortly after Noon so that I would get a good spot and have time to play with the cats before class.  Once you entered the building, you checked in and you left your donation (minimum $12 required donation).  You enter into a large open room with cat towers and cat condos around the perimeter.  There were several litter boxes in the room, but you could not smell them at all!  There were also cat shelves mounted at varying heights on the walls. 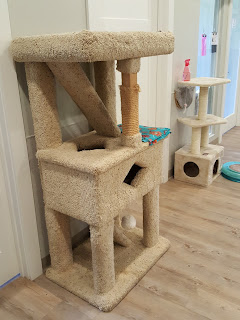 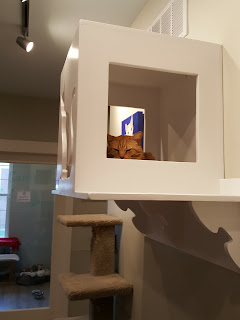 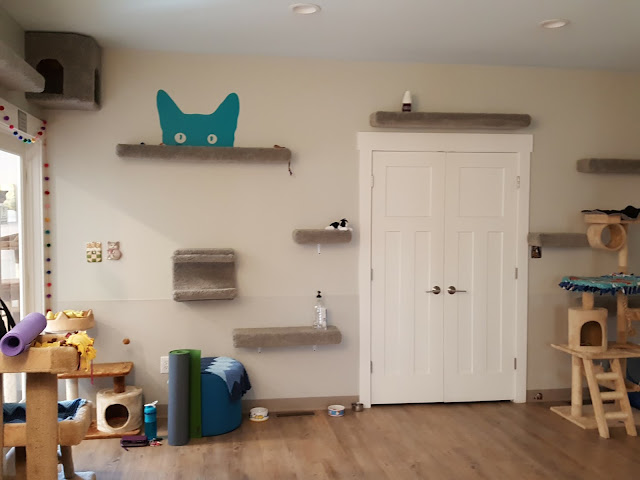 Once I set up my mat, I continued down the hallway to the various cat rooms.  Some rooms were open to allow the cats to roam throughout the building, while others were kept closed.  All of the doors had information about the residents of that room written on and mounted to the glass. 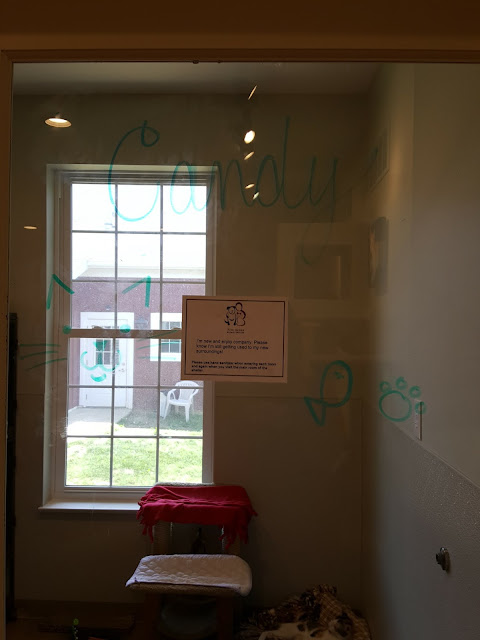 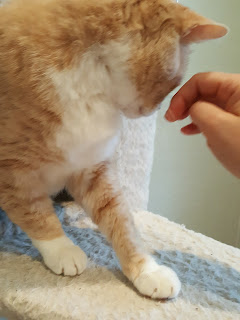 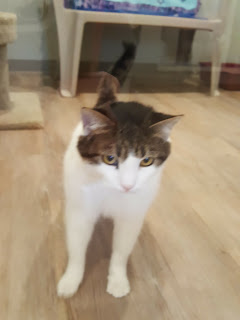 At the end of the hallway was a door that led to a "catio," which is a screened in porch just for the cats. 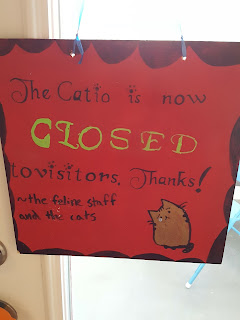 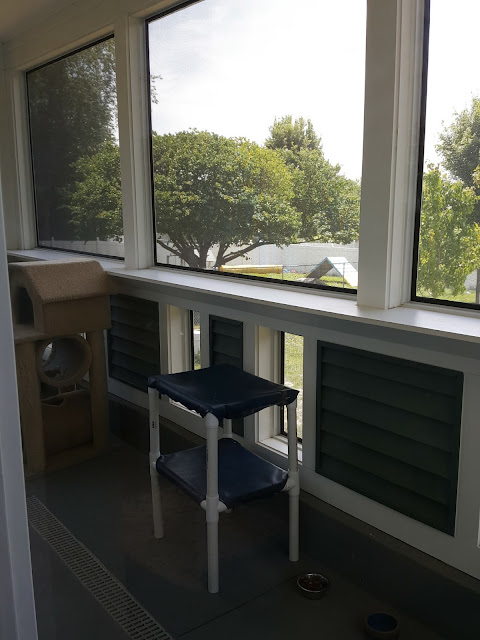 After making my way through all of the rooms, it was time to start the yoga class.  The room was full of other participants by that point, but I never felt crowded.  There were two cats that pretty much slept on their cat towers the entire time while two others roamed during class.  Staff gave us toys to attract the cats, and they were definitely put to use.  Of the course of the class we managed to get in a good workout while also giving the cats plenty of attention. 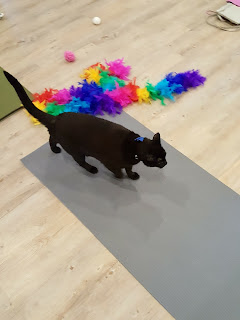 After class, I went into the only room I had not visited yet.....the kitten room.  There were two kittens out in the center of the room, and they were so adorable that I did not want to leave. 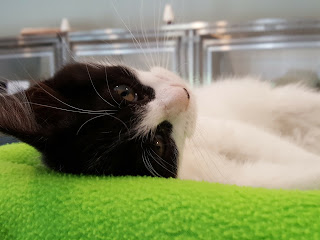 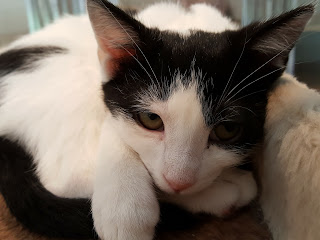 If this yoga class was not on Mondays during work hours, I would take it again.  It was a great way to de-stress and support a good cause at the same time.

Because I had a great experience at the Five Acres Animal Shelter cat yoga class, I decided to sign up for a weekday evening class at Tenth Life with a friend, for what they call Cats N' Mats.  Tenth Life is located on Cherokee Street, which is a neighborhood known for it's amazing Mexican food.  For this cat yoga class, you pay online in advance through Eventbrite.  The total came to $16.74 and since it supports a good cause, I didn't mind the fee.

This was my first time in the Cherokee Street neighborhood.  I showed up early because I didn't know how difficult it would be to find a parking space at that time of day, but there ended up being plenty of parking available on adjacent streets.  The doors opened shortly before 6 p.m. and we checked in and were told that we could set up in either of the two main rooms.  My friend and I picked our spot and immediately started playing with the cats. 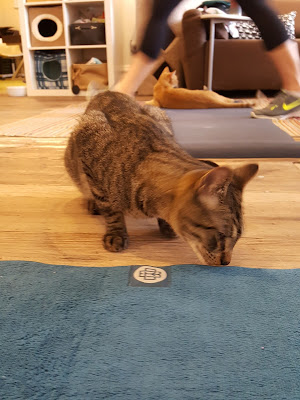 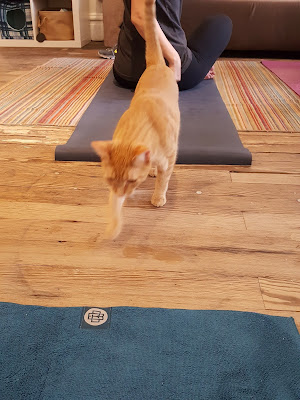 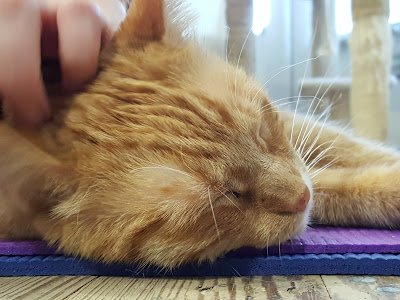 By 6 p.m. both rooms were filled with participants, yet there was ample room to spread out.  The instructor positioned herself in between both rooms so that we could all see her.  Despite being new to yoga and only being familiar with a few of the terms, I could just feel the difference in the flow of this class vs. the cat yoga class at Five Acres.  Neither was better or worse, they were just different.  Some of the poses were the same in both classes while others were completely new to me.  There was substantially more laughter during this class, but there were also more participants and more rambunctious cats roaming about.

The classes at Tenth Life fit my schedule better, so I will most likely be a repeat customer.  I could technically do a "cat yoga" class at home with my own cat for free, but there is just something about the opportunity to attend a yoga class at a shelter that warms my heart.

The St. Louis area is filled with low cost and even FREE opportunities to attend a yoga class, many of which are listed on the Eventbrite website.  Click here to check out the list of upcoming classes.  It is a pretty extensive list this time of year, with both indoor and outdoor options available.  There have also been "Yoga with Bunnies"and "Goat Yoga" classes in the area, so I am definitely open to attending more nontraditional yoga classes in the future.  I will keep you posted on what else I come across....