My first CycleBar class was actually the Sunday before my wedding, March 19 at the Chesterfield, MO location during their grand opening celebration.  I first heard about CycleBar through Facebook when their page popped up as something I might "like."  A quick Google search showed that they were opening two locations in the St. Louis area this spring, one in Chesterfield and one in Creve Coeur.  Their class format sounded similar to SoulCycle, so I liked the pages for both locations to stay in the loop for any grand opening deals.

As our wedding approached, I was very busy with last minute tasks and packing, but I kept watching the social media posts for both locations.  The Chesterfield location released their schedule of free classes first, most of which I could not attend, but I managed to find one on March 19 that worked.  The class was at 10 a.m. but I showed up early because I did not know what to expect. 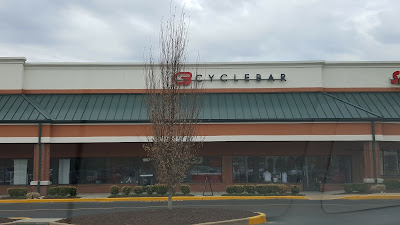 As you enter, you see cubbies with cycling shoes and several tablets against the wall.  This is where you check in.  The outermost tablet is where you tap your name to check in.  The center tablet is where you see which bike you are on, since you are assigned or you assign yourself to a specific bike for each class.  I was bike #35 that day, so I found cubbie #35 which contained cycling shoes that were my size.  When you create your profile online you enter stats like your height, weight, age, and shoe size.  I entered size 8.5 as my shoe size but when I arrived at CycleBar, my shoes were a size 9.  Staff explained that these particular shoes run small, so they recommend going up a half size for better comfort. 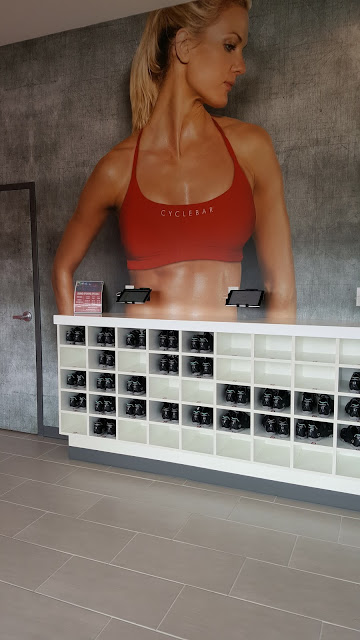 I grabbed my shoes and was escorted by the main desk, past the merchandise, and into the locker area. 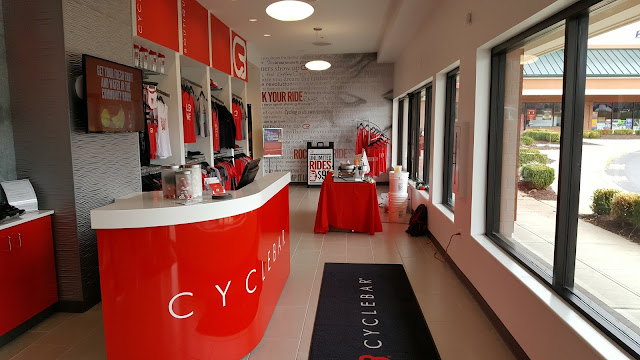 The locker area is a large open room that contained half-size lockers on two walls.  The lockers are numbered, but you don't have to pick the same locker number as your bike.  The lockers all contain usb charging ports as well as instructions on how to set your lock.  There were also restrooms and shower rooms adjacent to the locker area. 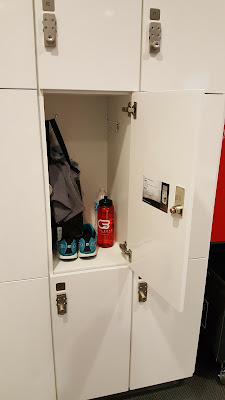 The wall between the lockers and the studio is used for announcements.  There is also one bin for your used cycling shoes and one bin for used towels that are collected after each class. 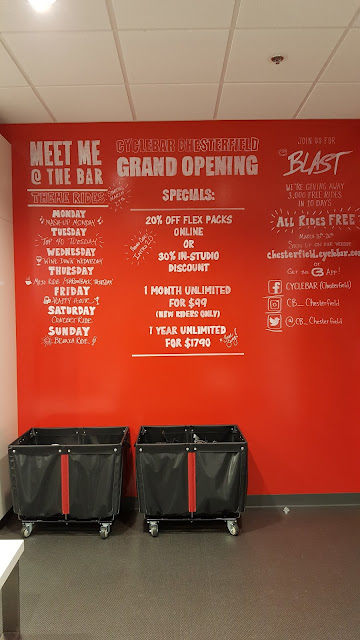 We were offered red CycleBar water bottles before class and were given the option of either chilled water or room temperature water. 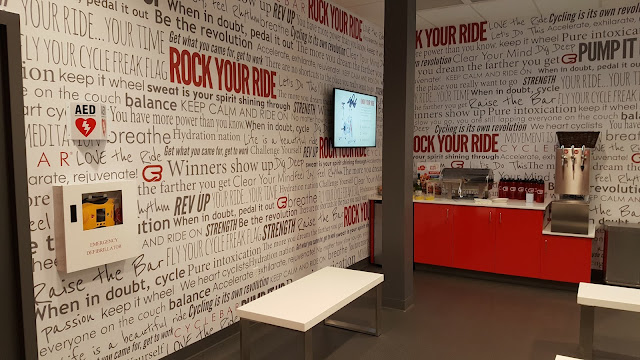 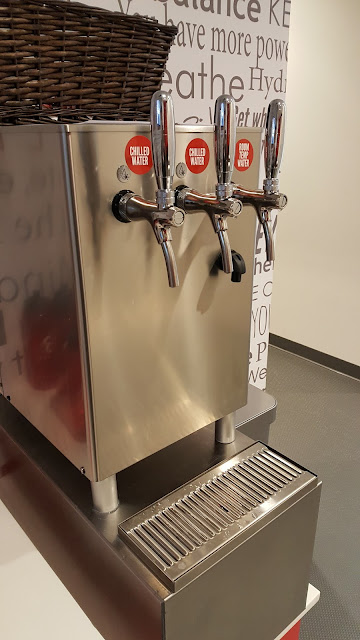 Once we had our water, we were escorted into the studio where staff helped us find our bikes.  The studio is large with three rows containing 48 total bikes.  The middle row is one step up from the first row and the back row is one step up from the middle row, so that all riders can see the instructor at the front of the room.  The instructor is on a platform facing the class with large ceiling-mounted tv's behind them on either side.  The entire wall behind the instructor is a mirror, so that riders can see themselves and watch their form. 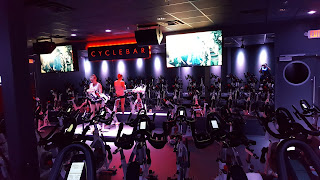 The bikes were made by Schwinn, obviously custom-made since they all had the CycleBar logo on them.  Mounted to the front of each bike were two holders; one for the four pound bar and one for the six pound bar....hence the name CycleBar. 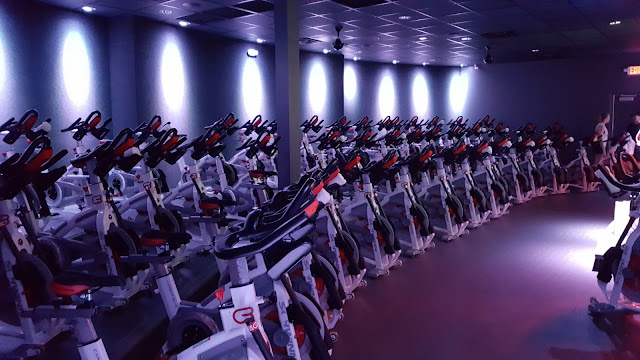 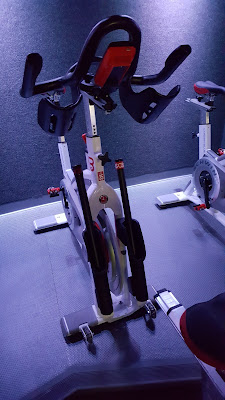 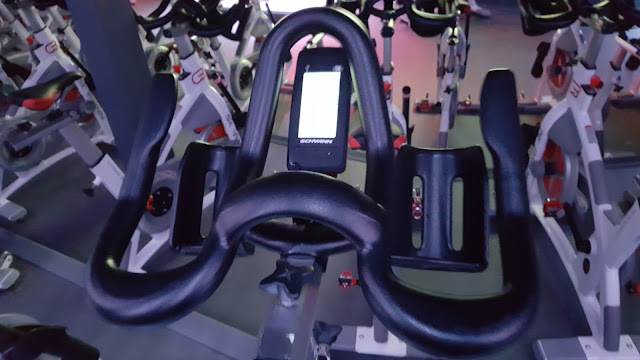 I brought my own towel to class not knowing what to expect, but each bike already had a fresh towel on it ready to go.  Staff help each new rider get set up on their bike and then explain the settings so that we were able to do it ourselves the next time.

Before you start your ride, you hit the button at the top of your bike's computer so that you can track your stats.  When I signed up for this class and set up my profile, I inadvertently unchecked the box that would allow my stats to also show on the tv's during class.  I could still see my effort and mileage on my bike's computer during the ride, but my stats would not show on the tv's which showed all riders and then ranked them in order of the effort they put out during the ride.

As class started, the instructor went through the different hand positions and what the different columns on the tv screens meant.  On the far left is your chosen screen name.  Then there is a column for your bike number as indicated by the bike at the top of that column.  The next column has a music note, or "Energy Points" which is used to rank riders during class.  The next column under the lightning bolt is for your watts, which is your current effort or energy output.  The last column with the speedometer shows your current RPM (revolutions per minute).  Not shown on the tv's but on your bike's computer, is total mileage.

This particular class used current, upbeat music that was easy to ride to.  The instructor would tell you what your gear and RPM's should be in order to ride to the beat, which made it easy to replicate the instructor.  We moved through all the different body positions over the course of the class and had one song entirely dedicated to working our arms using the arm bars.  Towards the end of class was a "connect" song where we just rode in whatever gear felt best and just reflected on our day and your ride.  Throughout the class the instructor would turn on the tv's to show riders how they currently ranked, but she mainly had the tv's turned off so that we would not fixate on the stats rather than the ride itself.

At the end of class, we unclipped and dismounted to the right side of our bikes to stretch.  The instructor let us know that our class stats would be emailed to us.  I wasn't sure if mine would be since I had unchecked the box for my stats to show during class.  But to my surprise, I received the stats and I ended up ranking 12th out of 47 riders!!!!  After each class you will receive an email with your stats as well as a link to the play list used during that class.  Then when you log into your account, all of your previous classes are saved so that you can see your performance over time.

This particular class was a "brunch" ride so as we exited the studio, the smell of waffles greeted you.  Mimosa's were also available.  What I didn't realize about the grand opening rides was that you could attend more than once.  I wish I would have known this, because I would have made an effort to come to a couple classes since they were so much fun and you burn a ton of calories each time.

After we got back from the wedding and honeymoon, I saw a Groupon for four classes at CycleBar - Chesterfield....so of course I bought one.  The classes have been loaded to my account and now I am just waiting to find times that work with a friend's schedule before I attend again.  The last time I checked, the Groupon was still available. Click here to get yours before they are gone.

Since returning from the honeymoon, I have been attending classes at CycleBar - Creve Coeur, which is my closest location.  Eventually, I will post my review of that studio, so stay tuned!