In 2016, I was a course monitor for the Race 13.1 - St. Louis half marathon and 5k and I remember thinking "I want to do that" when I saw the race sweepers pass by.  So this past Sunday, I managed to convince a former co-worker and relay teammate to be a race sweeper with me and we had an absolute blast!!

With the race scheduled for a Sunday, packet pick-up was held at Fleet Feet - St. Charles on Saturday and also on race day prior to the start of the half marathon.  Packet pick-up at Fleet Feet was a breeze and took only a few minutes.  We received our bibs (customized with your name if you registered early enough), gender-specific t-shirt, race bracelet, temporary tattoo, and a race sticker.  Not only do I like the design of the race shirts, but the sizing of the shirts were actually spot on for once.  Lately my race shirts look like they were designed for teenagers and not adult women, no matter how large of a size I select.  The one thing missing from packet pick-up were bags to carry everything in.  I kept dropping the sticker and temporary tattoo on the way out. 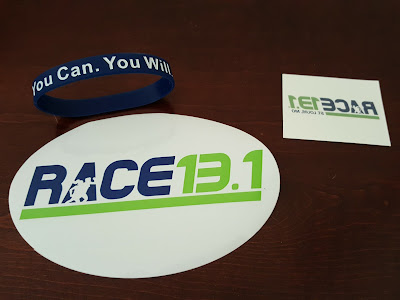 Pre-race communication included an Athlete Guide full of useful information.  I read through it again on Saturday night and determined that I was going to park in the same lot as last year since it was so easy to get in and out.  I arrived in that lot around 6 a.m. Sunday morning just as my fellow sweeper was parking her car.  We walked a block to the start/finish line and race day packet pick-up tent for her packet and our race sweeper signs.  At first, we were handed an actual industrial-sized broom labeled "sweeper" to carry, but then they found two much smaller signs to carry instead.  Whew!

A line of porta potties were in the lot adjacent to the start/finish line and although the line was long pre-race, you didn't have to wait long at all.  Race sweepers are intentionally supposed to be the last ones to cross the finish line and be the end of the race, so we started at the very back of the pack, right before the 5k runners.  We were asked several times what "race sweepers" were which surprised me, but I just explained that Disney races have balloon ladies and Race 13.1 - St. Louis had us! 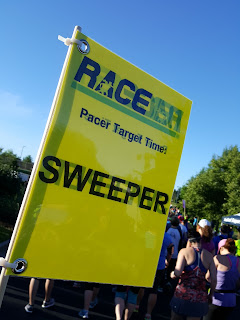 And then we were off!  Despite being a slow runner myself, it was so difficult watching the other half marathoners take off running while we were walking across the start line and then up the slight hill.  I remember fighting that urge to catch up, but I am sure it was even more difficult for my fellow sweeper who is actually a very fast runner and often places in her age group.

The first part of the course is on the research and development park's roads that were technically still open, but there was no traffic when we all started.  Within a half mile, we connected to the Busch Greenway and then onto the Katy and Hamburg Trails so the terrain varied between paved roads, paved trails, and crushed limestone.

The weather could not have been more perfect for this race!  It was sunny, slightly breezy, with a high in the low 70's.  With all the rain this spring, the flowers were in full bloom.  But with the rain and flooding we have had this spring came swarms of mosquitoes on some parts of the course due to standing water in areas that were still flooded.  Luckily a kind gentleman on a bike offered us bug spray several miles into the race, which was a lifesaver!

Despite walking the entire course, I only managed to take a few photos because I was so busy getting caught up with my fellow sweeper.  Honestly, the nearly four hours it took us to finish flew by because the conversation flowed the entire time.  We started out seeing other runners ahead of us but further into the race, there weren't any other runners in sight so the trails were very quiet and peaceful.  We also saw several deer cross our path during the race.

As we approached water stops, we were offered water and Gatorade before they started packing up the remaining supplies.  At one point we passed a water stop, the group started packing up, and we ended up making a wrong turn at the fork because we didn't see any signage and had no other runners to follow.  We eventually found the right path, but managed to add a few more steps to our total mileage for the day in the process.

Once we reached the Weldon Springs Site and Interpretive Center, we were no longer protected by tree cover and were in complete sun.  Luckily the cool breeze continued, so heat was not an issue.


The mileage continued to increase until we were back in the research and development park.  We made the turn down the hill and noticed that nearly all the cars were gone, but we still received a few cheers as we finally crossed the finish line.  The clock had already been turned off, but my watch shows that we finished in 3:55:05-ish.  We grabbed our medals and waters before we were greeted and thanked by Race 13.1 staff. 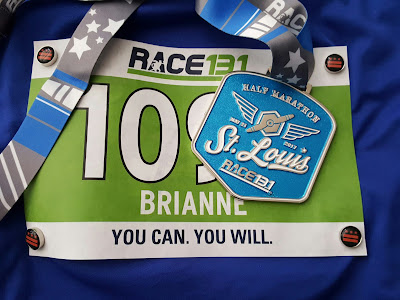 We didn't spend much time at the finish line since we both had afternoon plans and as we headed back to the parking lot, we noticed that we were the only two vehicles remaining in that lot.  It was a unique experience for both of us and we have already discussed being sweepers again in the future.  I highly recommend being a race sweeper at some point to give you a different perspective, but be sure to sign up with a friend.  I would not have wanted to be on the course for that long by myself!

You can sign up to be a racer sweeper or pace group leader by finding your desired race location and then clicking on the Volunteer tab.  Scroll down to Pace Group Leader and apply!

Remember to create an account and save all of your race results in one place by going to www.athlinks.com.

Help other runners decide which race to register for by writing race reviews on BibRave.
Posted by Bree at 7:07 PM