I left work early on Friday so that the boyfriend and I could head to Columbia, MO for my 35th half marathon.  Columbia is about an hour and a half from St. Charles if you can begin your journey before rush hour, which was our goal.  During the drive, Dan asked me if I was planning on running this race again next year.  I said "no" at the time because there are other September races on my bucket list and I have run this race two years in a row, but now I know that this race just isn't for me.

Packet pick-up was at Tryathletics again, and it was a quick in-and-out process.  As we were on our way to the hotel we noticed an Asian restaurant that sounded good.  I had already Googled restaurants in Columbia and I found a few Italian ones that had a basic pasta and meat sauce on their menu but when it came time to choose, we went with the Asian restaurant.  This ended up being the bad idea that led to a bad race.  I had noodles and veggies with teriyaki sauce and grilled fish, which I thought was safe.  All I will say is that it didn't sit well with me and it greatly affected my race time.

The half marathon started at 7:00 a.m with the 10K starting at 7:30 a.m.  Because the half marathon is part of the larger Roots N Blues N BBQ Festival, all of the parking garages downtown were free.  This year the start and finish line were Stephens Lake Park, so you could either take a shuttle from a parking garage one mile away or you could walk from the closest parking garage, which was a half mile away.  I opted for the closer parking garage and I arrived just after 6:00 a.m.  It was still pretty dark, but there were enough other runners around that I just followed the crowd to the park.  Once in the park I assumed there would be signs to the start line, but there were just general festival signs and nothing about the race.  Once I found the start line I also assumed there would be porta potties nearby, but they were by the festival entrances and not the start line.  Luckily I arrived with time to spare!

At the start line waiting for 7:00 a.m. I started talking to a runner who was station at Whiteman Air Force Base, which was an hour or so away.  We compared our race histories and discussed our bucket lists.  All of a sudden we were surrounded by runners and it was after 7:00 a.m.  I heard no announcements and no National Anthem from where I stood in the middle of the pack and then all of a sudden, runners were moving forward and the race was underway.  In 2013, I remember it being a bit more organized (and there were porta potties at the start/finish line).

What I like about this race is that it is mostly on the trails in Columbia, so it is easy for the race directors to control.  The terrain varied between concrete sidewalks, paved trails and roads, rock trails, and dirt trails.  When we were crossing streets, volunteers were at the intersections protecting us from traffic.  The race course was very peaceful as we weaved in and out of various parks and through agricultural research areas.  At one point, there were two random hot air balloons flying high above an open field the trail was running us through.  Beautiful!

At mile 9 we actually ran past the start/finish line of the 2013 race.  At that point, I really wished I was at the finish line because I had started feeling sluggish after mile 6 (remember what I had for dinner the night prior).  In the 2013 race we actually started by running up a long hill towards the Mizzou campus and I remember thinking that I should have signed up for the 10k, rather than the half marathon.  So in 2014 as I passed the start/finish line from the year prior, guess what came next.  Yes, the hill.....at mile 9.  Ugh.  When you reach the top, you are on the Mizzou campus.  Apparently it was a parents weekend or there was a campus tour, because the sections we ran through had multiple large groups walking around.

After running through campus, we ran around a hospital.  It always makes me laugh when a race course runs us past hospitals and cemeteries,  it just seems ironic somehow.  The course then took us back towards the park.  I could see the park long before the course took us back into it, but we finally made it back inside.  At that point we were back on a paved trail and we were often passing runners who had already finished and were wearing their medals, so I knew we were close.  My GPS is often a bit off from the mile markers so I mistakenly thought a section filled with runners and several food and beverage booths was the finish.  It wasn't!  This section actually annoyed me a bit because the course ran us directly through where the food/beverage booths were for finishers.  Literally, the path went right through where people were standing in line for post-race food.  Not everyone was paying attention either, so you had to weave around people standing in your path with their food and beer as you are trying to finish.   I thought this was poor planning, especially since I had run the race last year and remembered that the food/beer was in a park adjacent to the finish, rather than on the course, technically prior to the finish.

Once I made it through the crowd, you run up a slight hill and then finish on a downhill.  I was exhausted at this point and I was not feeling well.  Before I stretched, I just laid down on the ground and I never do that!  After seeing the lines at the post-race food, I had no desire to walk back down the hill and wait in line so after stretching a bit, I started heading back to my car.  I called the boyfriend to check the vending machine at the hotel because all I was craving was Sprite.  Weird!  We had requested a late check-out, so I had plenty of time to shower and wind down before we came back downtown for lunch.  Downtown Columbia is very cute with a wide-range of food choices and quaint shops.  Knowing I would get stiff on the drive home, we walked around for a few hours looking at shops and menus before we settled on a spot for lunch.  Last year we had gyros at the International Cafe, but this year we went for sandwiches at Tellers Gallery and Bar.  Both years we got ice cream at Sparky's, which I highly recommend.

I like quick weekend trips and Columbia has a very quaint downtown, so while I do foresee coming back to Columbia for another race, it will be for one of the others on my list.  I liked the 2013 course better than this year's course, but I liked the shirts and medals from both years equally. 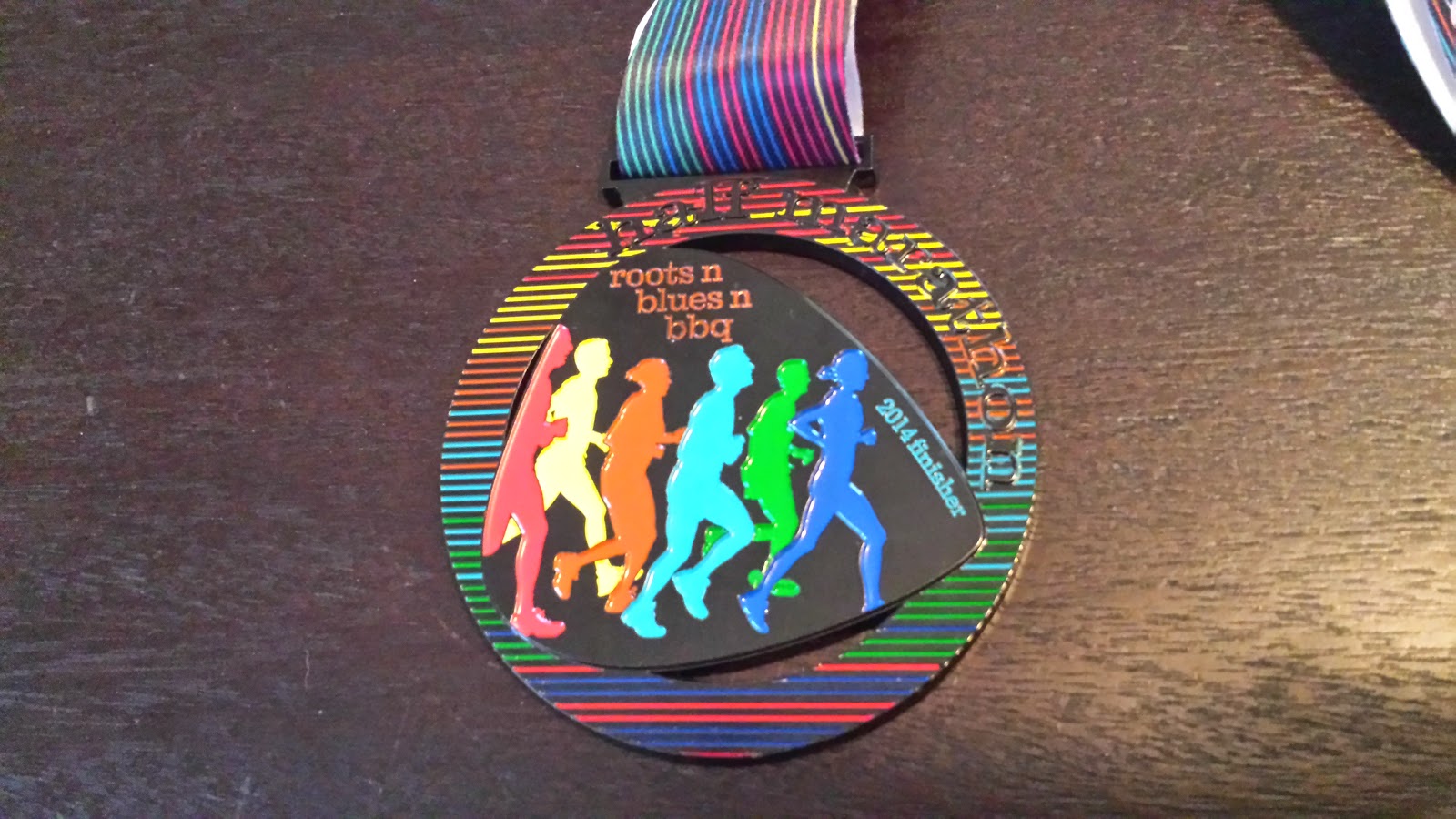