Whew, I can't believe it is already over!  My 11-day vacation and four races in four days has come and gone, and I have great medals and fresh blisters to prove it.  I started my vacation in Portland, Oregon visiting two of my former roommates from my DC days.  I distinctly remember when one of them was training for his first marathon when we were living on Capitol Hill.  I thought he was crazy and at the time, I hated running.  But eventually, it rubbed off on me.  I wanted to get in at least one run over the weekend I was in Portland, so I asked him for recommended running routes.  He recommended a trail in a neighborhood park, and I ended up running hill repeats.

A few days later, I flew to San Jose to meet my mom and stepdad.  We were slowly making our way down to Disneyland while visiting various beaches and tourist sites along the way.  My only other "run" the week of the race happened on an oceanside trail in Monterey.  As you can see from my Facebook page, the scenery was a bit too beautiful.  Even though I still ran over four miles, I stopped to take photos quite frequently.

Late Wednesday evening we made it to our hotel for the next four nights, the Howard Johnson-Anaheim, which was right across from Disneyland.  Every time we go to Disney World we stay on Disney property because of the convenience, but taking buses in between parks takes anywhere from 20 - 45 minutes depending on the resort.  So although the rooms were not decorated with a Disney theme and I didn't hear "have a magical day" at all, you could not beat the convenience of being able to walk a few blocks and be at the entrance to Disneyland and Disney California Adventure.  Advice:  If you stay at the HoJo, request a balcony facing Disneyland so that you can see the fireworks from the comfort of your balcony if you decide not to stay late in the parks.  If you don't have a room closer to the I-5 side, you can actually hear the music from the park that plays with the fireworks and you can go to bed immediately after the fireworks end, rather than having to wiggle through the crowds to the exit!

Also walkable from our hotel was the expo at the Disneyland Hotel's convention center, which we visited Thursday afternoon.  The Disneyland expo was very similar to the Disney World expos:  a variety of vendors and long lines for the official New Balance Disney shoes.  The one thing that blew my mind was the line for the "official" Run Disney merchandise.  It snaked around the inside of the ballroom before extending into the hallway.  The area itself looked significantly smaller than the official merchandise area at Disney World expos, so that must have been the cause.  Either way I was not going to wait in that line, especially after picking up three more Disney race shirts for the Dumbo Double Dare.

The only issue I came across was that I was apparently so excited about registering for the Dumbo Double Dare, that I mis-typed my birthday as the 12th rather than the 13th.  This resulted in me not being registered for the Coast to Coast Challenge since the birthdays did not match.  I briefly panicked, but the wonderful volunteers/staff at the Runner Relations booth were able to fix it for me and make sure that I left with the green bracelet required in order to receive the extra medal at the finish of the half marathon.  Whew!  Be sure to type in your birthdays correctly.  Don't get so excited that you mis-type information like I did.
Before and after the expo on Thursday, we went to Disneyland, rode one of my favorite rides multiple times (since the park was not busy yet this day), and stayed for the evening fireworks show. 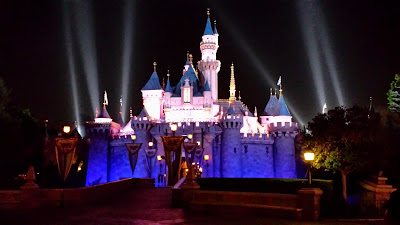 The original plan was to sleep in on Friday while my parents were at the 5K and they would sleep in on my 10K day.  On Sunday, I would get up really early for the half marathon and the parents would find me later on the course to cheer me on.  It turns out that my mom accidentally signed up for the 5K twice since the Run Disney website kept locking up the day registration opened, so it was either waste a perfectly good 5K entry OR force myself to participate in the 5K too.  Guess which one I chose...

I didn't really take any photos during the 5K, but it was filled with costumes and it was very family-friendly.  The most memorable moment of the 5K was when I was literally in between two groups who were yelling at each other.  We were in downtown Disney nearing the finish when I heard a male in the distance saying, "on your right, on your right."  The man, his wife, and a child in a stroller passed a group and then passed me.  The group behind me that they passed started yelling, "no strollers are allowed in this race."  Then the wife turned around and yelled back to the group, "yes they are."  Then the group yelled back, "keep lying to yourself."  All I could think was, "keep calm, it's a fun run and we aren't even being timed in this race!"  I didn't dare say anything out loud since I was already technically in the middle of the shouting but I did check the event guide later that evening.  Sure enough on at least pages 30 and 40 it states that strollers, baby joggers, etc. are prohibited for the safety (and apparently sanity) of the other runners.

After the 5K, we spent the day at Disney's California Adventure.  We were able to get on the rides we wanted multiple times before we decided to rest at the hotel for a few hours.  After a nap, we returned to Disneyland to ride a few more rides on our last day at the parks and the crowds had grown significantly!  At this point on Friday evening you not only had runners and their families, but the typical weekend crowds, in addition to the holiday crowd.  Just the day before, we were able to ride Pirates multiple times in a row after waiting less than 10 minutes in line each time.  Friday night we waited around 35 minutes.  It only got worse from there.  Disneyland is smaller than Disney World so although everything is closer together and requires less walking in between rides, there are also less areas for seating and stroller parking.  I don't normally get claustrophobic, but when I literally couldn't walk because the sidewalks were so packed with people and strollers, I got tense.  So we decided not to stay in the park for the fireworks that night since we could see them from our balcony and it would be far less chaotic.  Advice if you run in Disneyland Labor Day Weekend:  Try to arrive in town early so that you can go to the parks on Wednesday or Thursday before they get packed with weekend crowds.  Thursday was not crowded at all and Friday morning was fine, but Friday evening was absolutely packed!

After a few hours of sleep, it was time for the 10K.  Because adding the 5K to my weekend meant I was now running four races in four days (race recap for the 4th race to follow in a separate post), I decided that this race series was going to be more about the journey and less about a specific finish time, so I sacrificed time in order to take photos along the course.  Below are the pictures I took during the 10K (that weren't blurry from the sweat on my phone).  Feel free to save them as your own if you ran and didn't get the chance to take any photos.


After the 10K, my family and I went to the packet pick-up for my fourth race of the weekend as well as Santa Monica and Huntington Beach piers.  In Huntington Beach, I actually saw several Disneyland Half Marathon and Dumbo Double Dare shirts which made me smile.  We went to bed early again since the half marathon started Sunday morning at 5:30 a.m. and it would be the largest of all the races that weekend.  Again I spent a lot of time taking photos during the half marathon because it will likely be a while until I get back to Disneyland, so feel free to save any of these magical photos as your own. 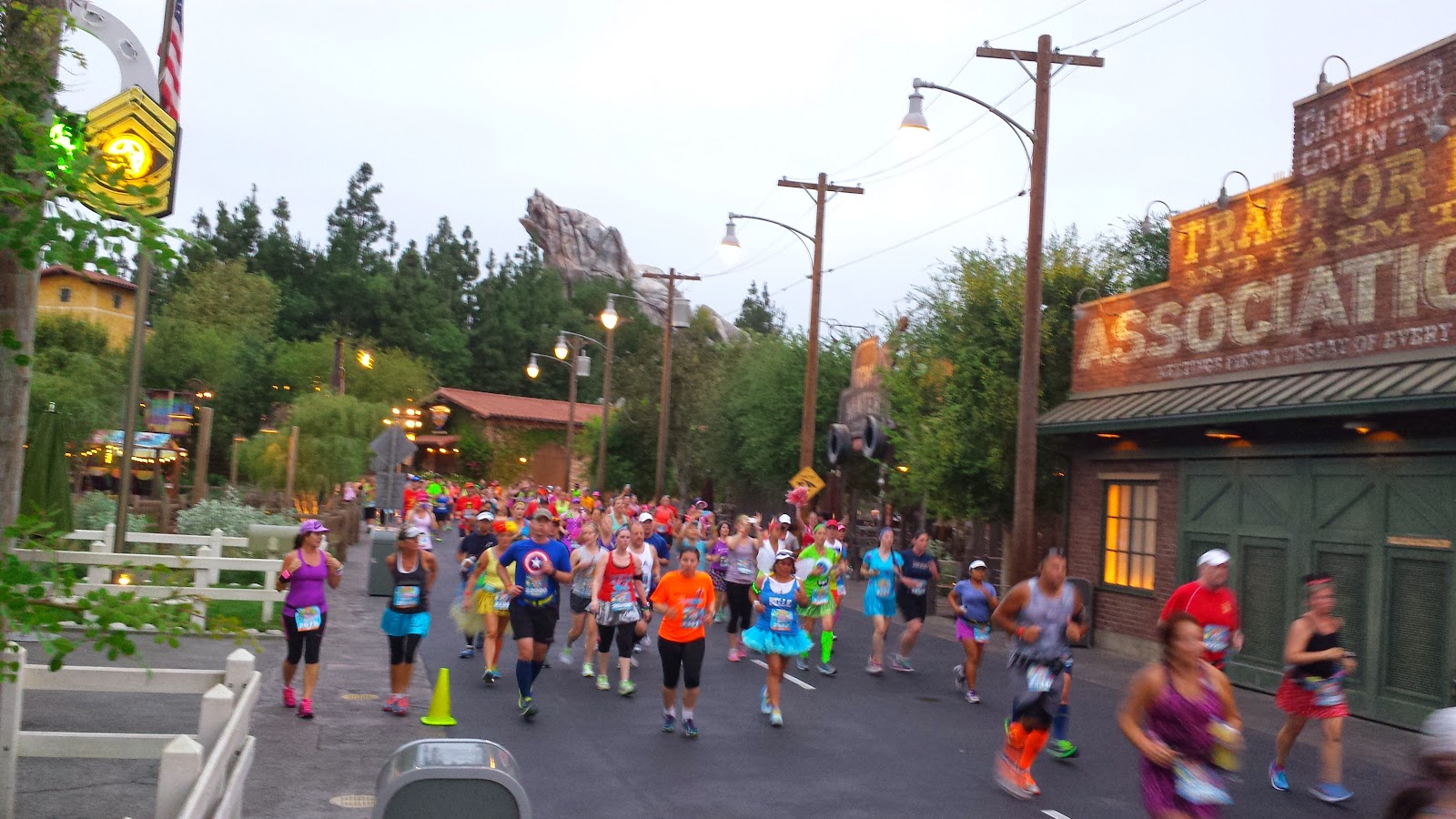 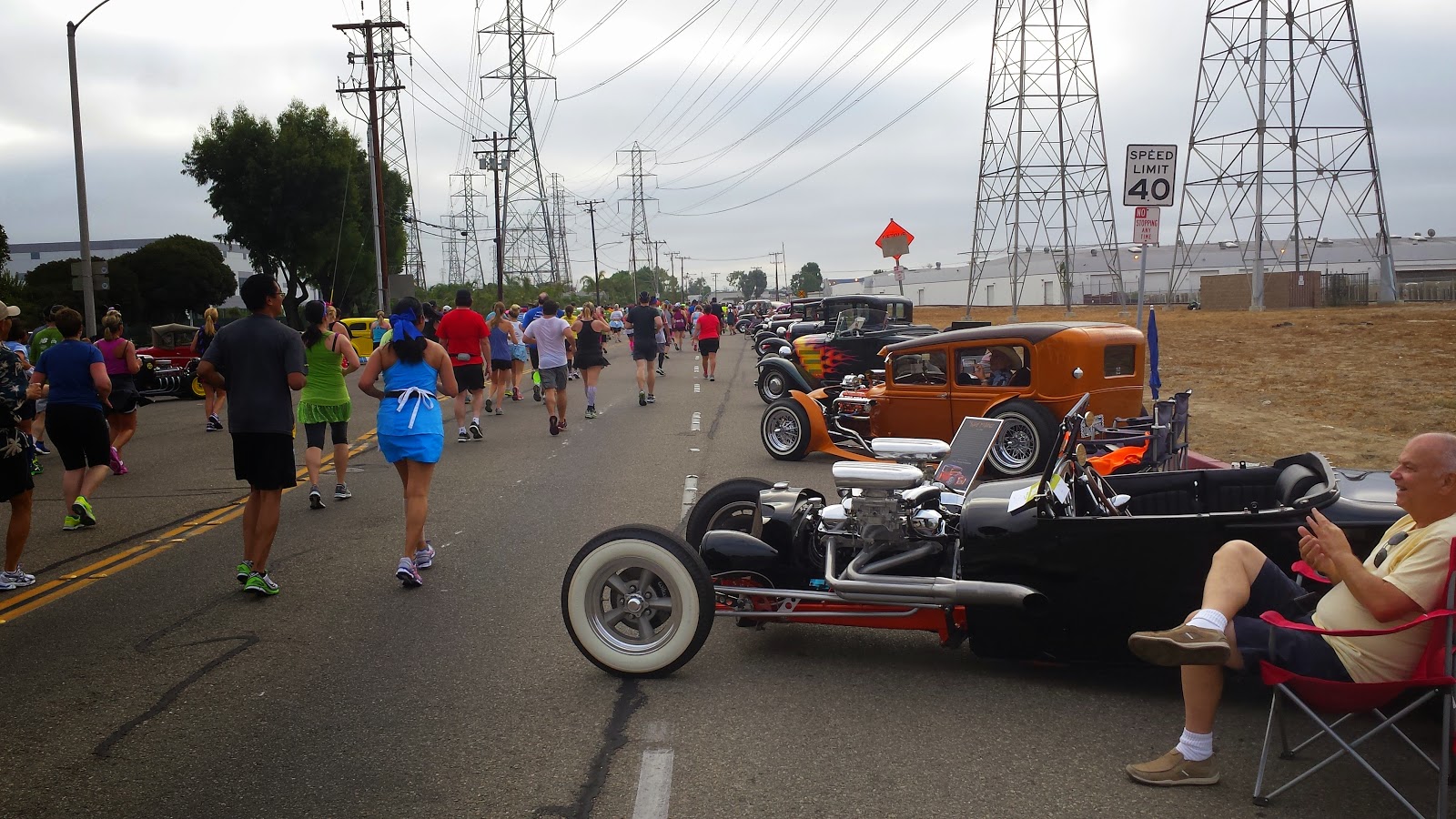 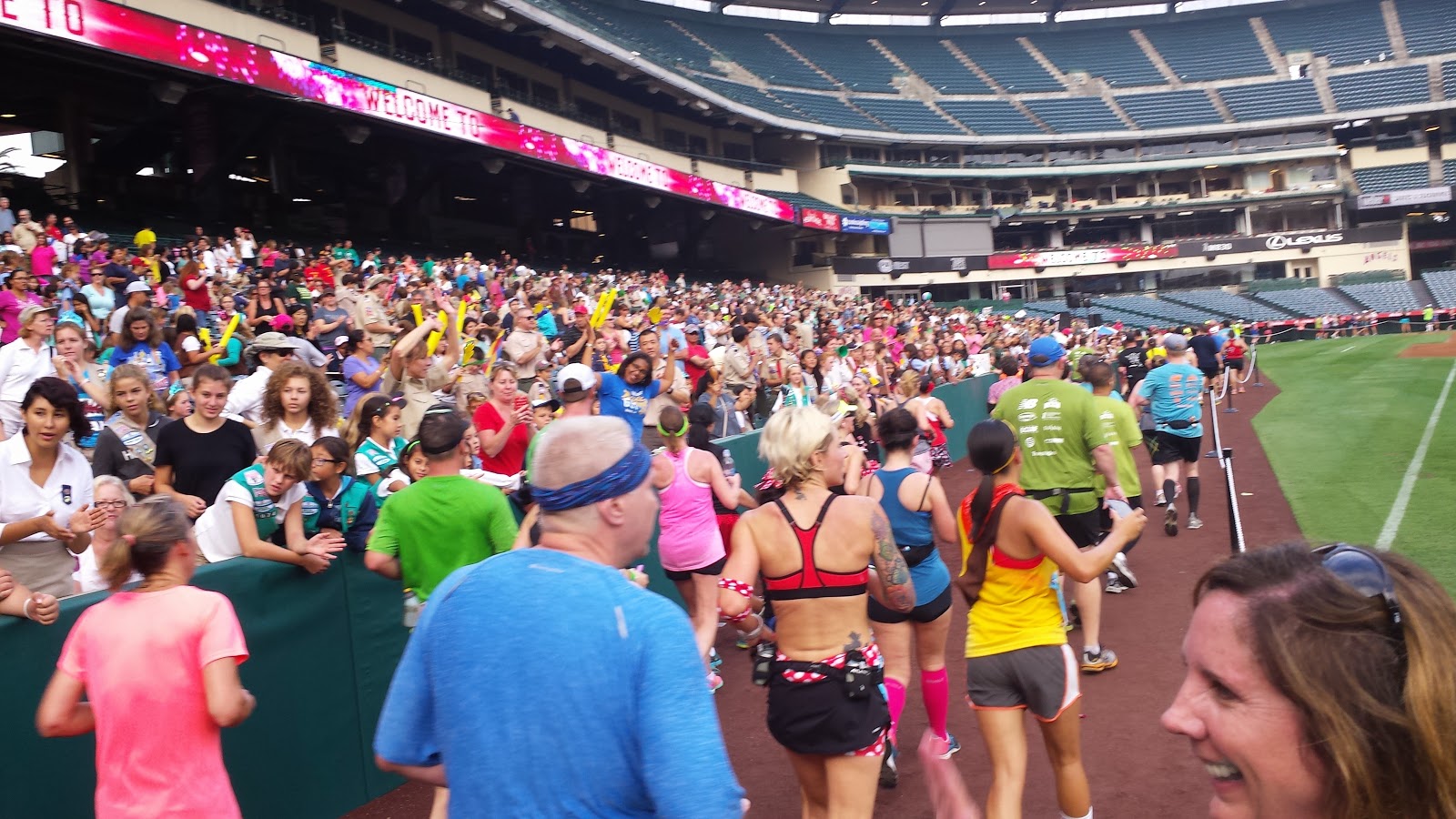 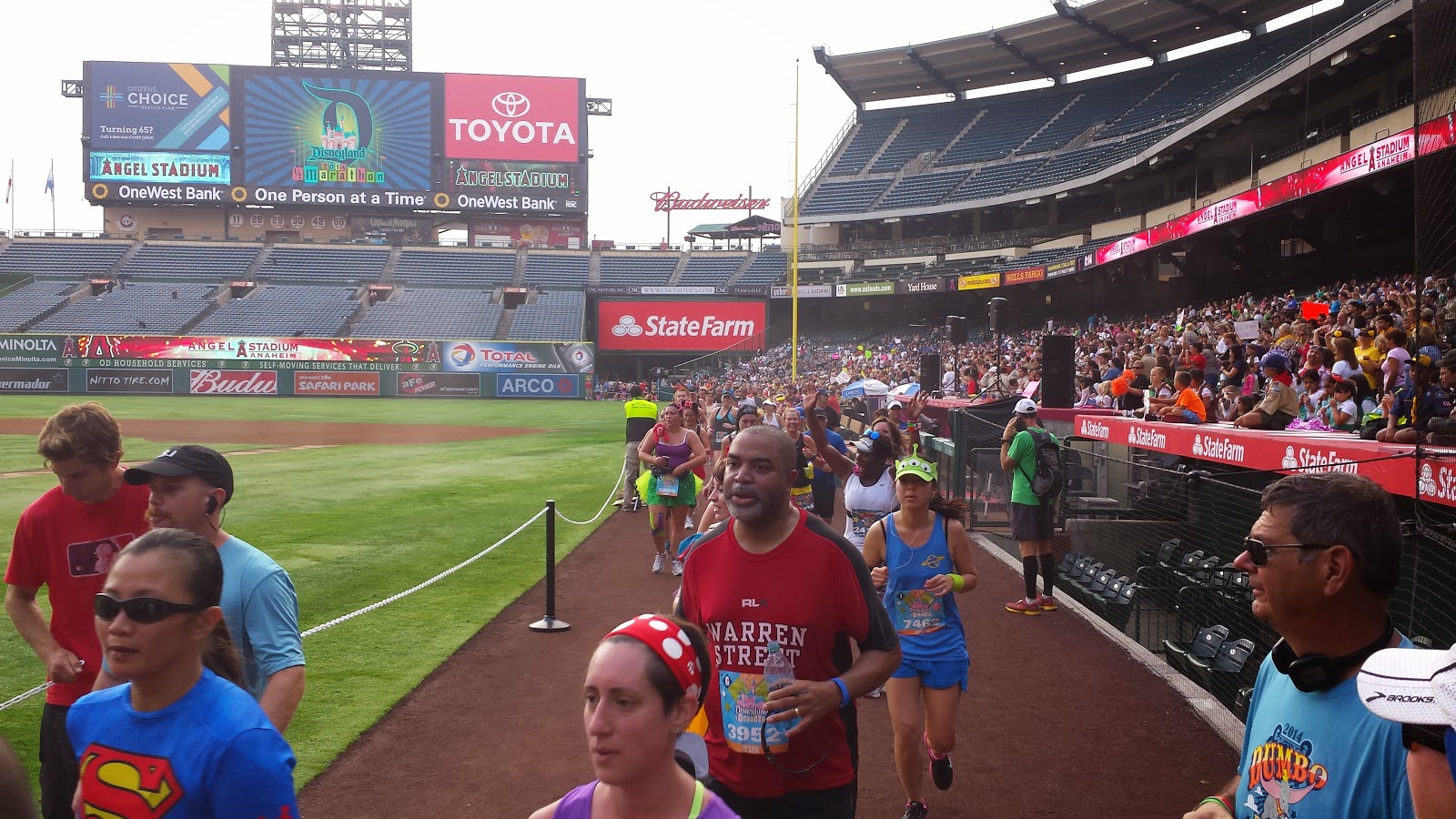 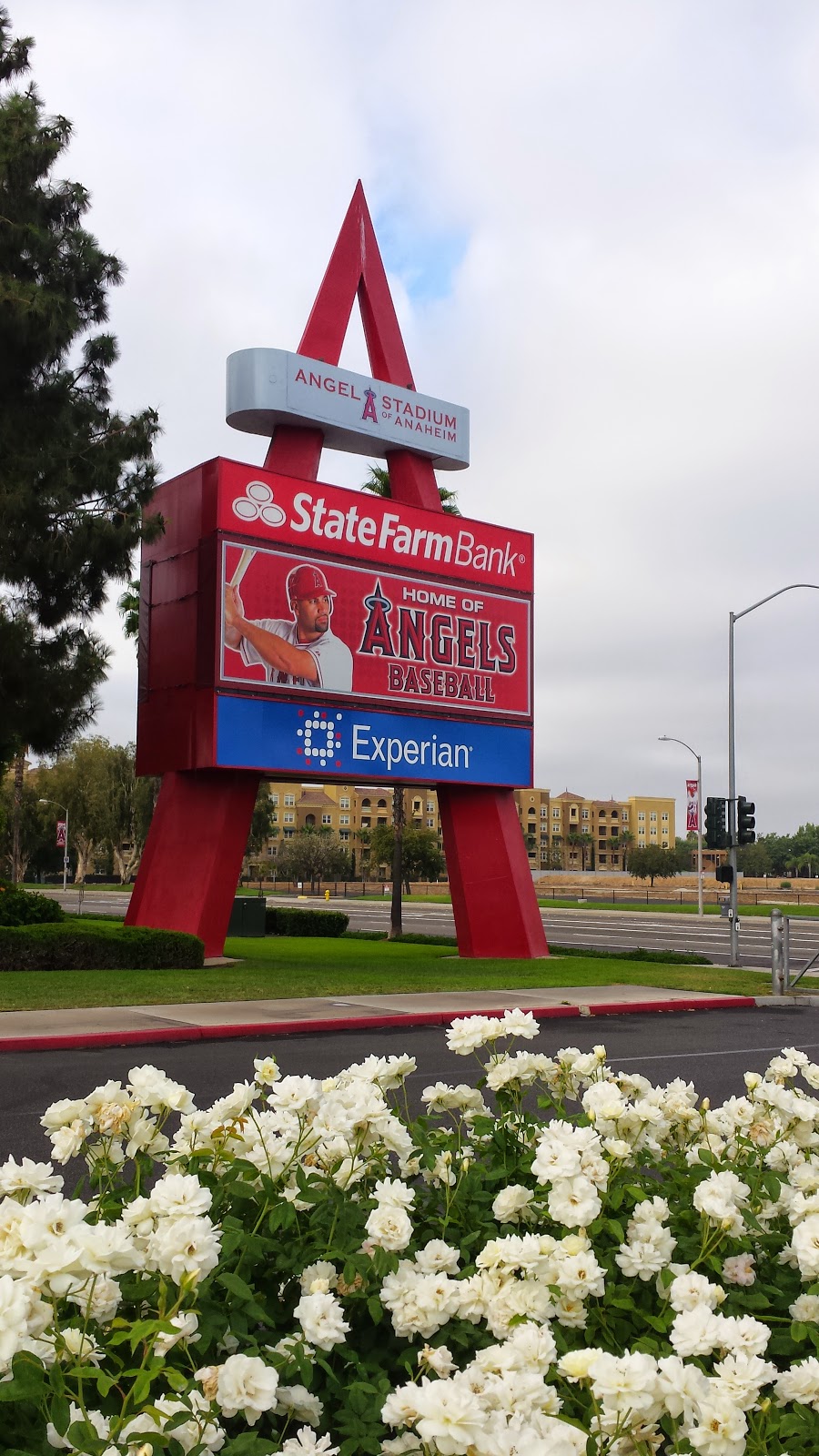 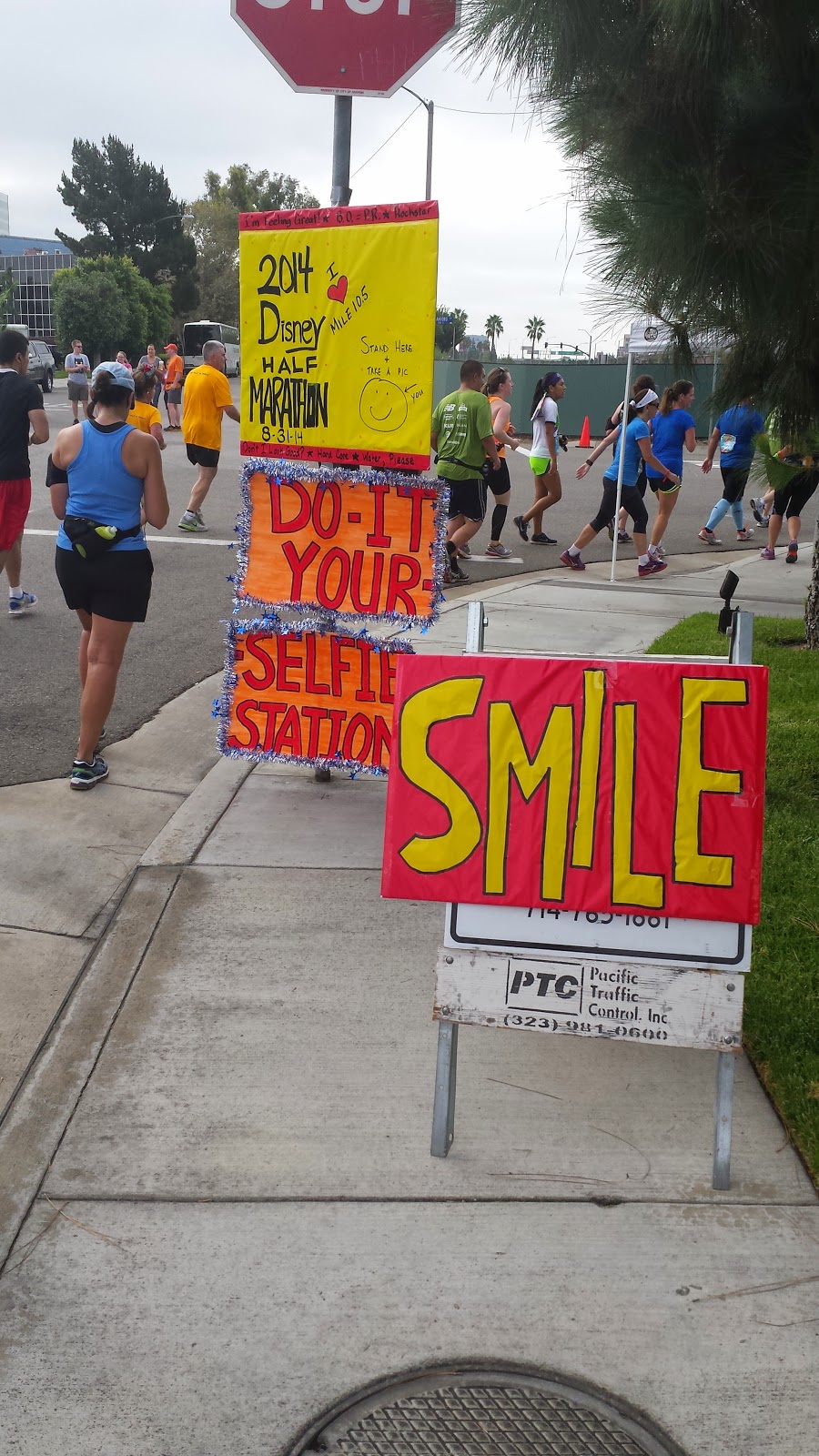 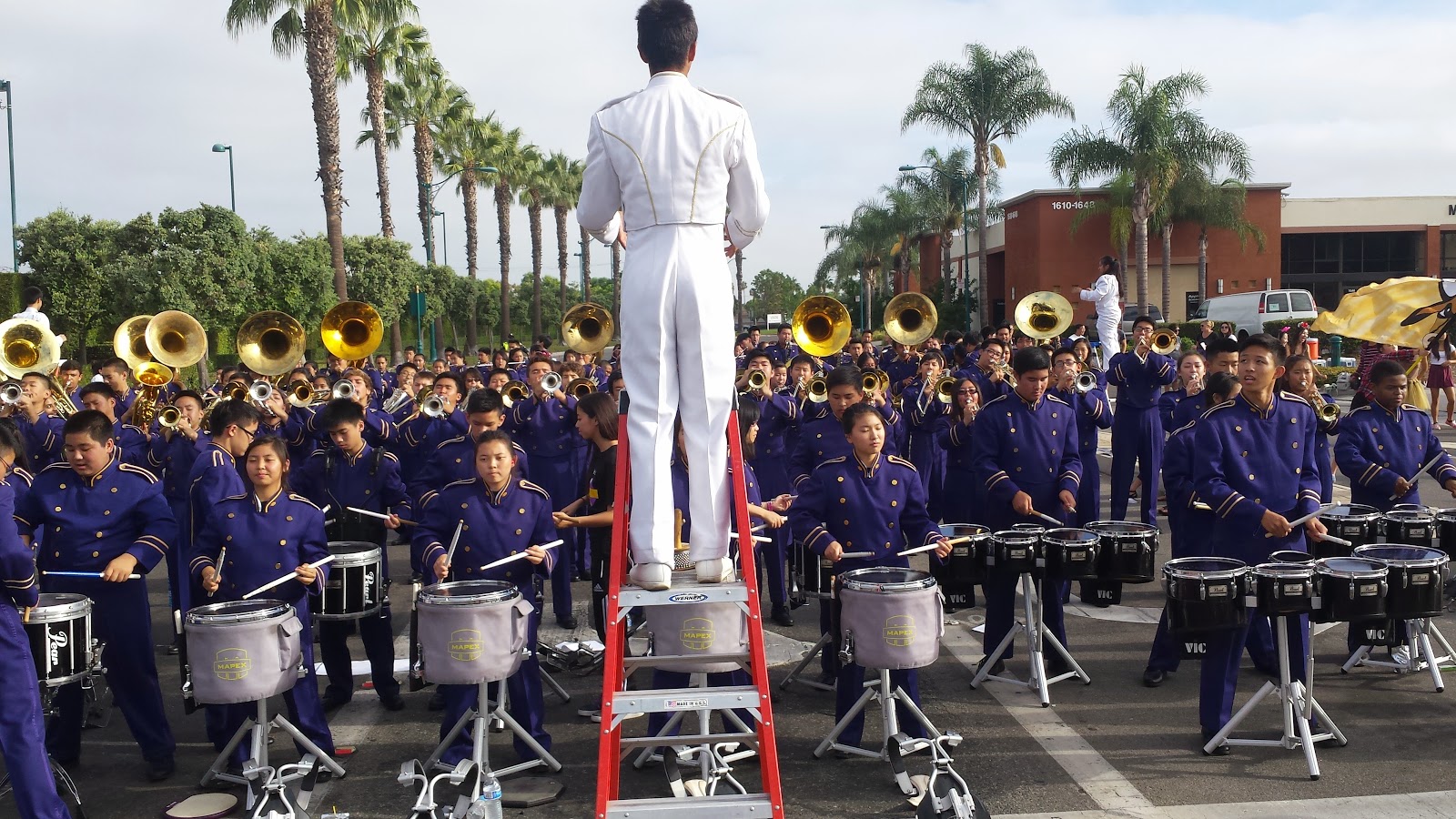 A mile or so after the last picture above was taken, I saw my parents with their sign and cowbells so I knew I was close to earning my medals.  Then I passed the 13 mile marker and I could hear the crowd at the finish....then I crossed the mat and I was done!!!  I collected my half marathon medal, Coast to Coast Challenge medal, and finally the Dumbo Double Dare medal and quickly grabbed drinks and the snack box before exiting the runner area.  All I wanted to do was get back to the hotel to stretch and shower so I walked back as quickly as I could.  We were checking out in a few hours to head to our last hotel in San Pedro where we were staying for the last race of the weekend, but first we were surprising my step-dad with tickets to the Angels game.  The remainder of the afternoon was spent relaxing at the game and then touring San Pedro - the port of Los Angeles.  I will post a race recap for the Conquer the Bridge 5.3 miler , the last race of the Labor Day Weekend, in a day or two. 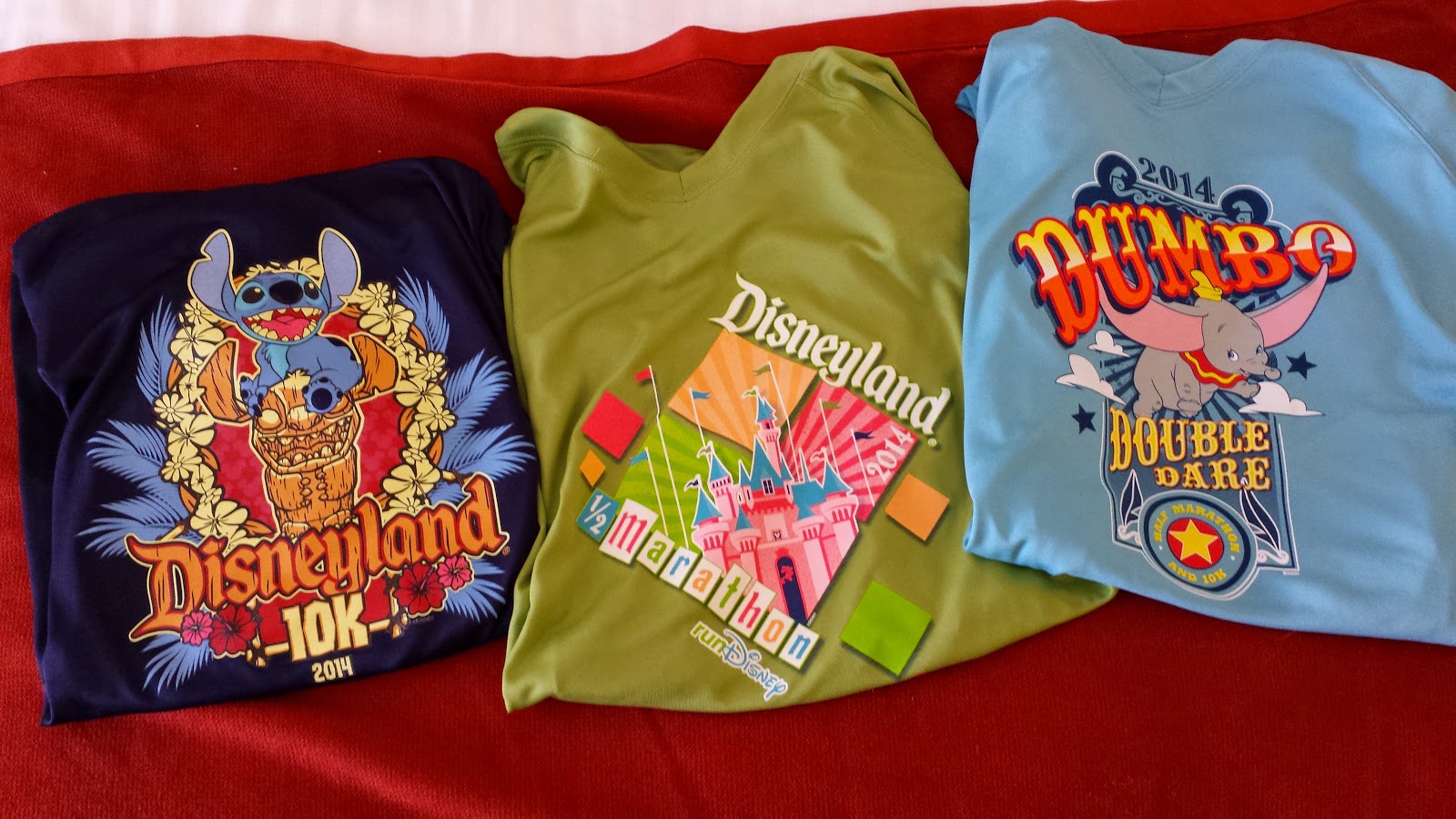 Thousands of people ran in Disneyland last weekend with me, but below are a few other blogs (in no particular order) you should check out if you are interested in running a Disney race:


Casual-Runner
Disney Runs in the Family
be the change (scroll down for half marathon and 10k posts)
Adventures by Daddy
Disney Runs My Life
Project Julie
Chad's Running Blog
Sarah Says...
Running for Cupcakes
Chip 'n' Dale Runner
Tara with Styles
Me and My Tween
Je Me Souviens - To Infinity and Beyond
Erin Runs Around
Amanda K Jones
Adventures by Katie
The Final Forty
Starting Late
Scoot A Doot
My No-Guilt Life
Fitness Junkees