When I was researching the Dumbo Double Dare in Disneyland, I wondered if there were any other races in the Anaheim/L.A. area over Labor Day Weekend.  Since I live in the Midwest, I want to get the biggest bang for my buck if I was going to fly to California so I wanted to see if there was just one more race that I could add before coming home.  After all, I had ran the Dopey Challenge in January so three races in three days wasn't unheard of, right?

Well I lucked out when I came across the Conquer the Bridge race in San Pedro - the Port of L.A. on Labor Day.  At the time, the 5.3 mile race had been held the past five years and they added a half marathon for the first time in 2013. I immediately emailed the race director with questions about the race and to make sure that the race would also take place over Labor Day Weekend in 2014.  He assured me that the 5.3 mile race would occur, but that the half marathon required approvals from the Port of L.A. that were difficult and time-consuming to obtain.  He told me that he would keep me in the loop as the race drew near, but to plan on running the race on Labor Day.

As the year progressed, I kept checking in with him and several times he actually called me to give me additional details about the race and the planning involved behind the scenes.  I thought the concept and course was pretty unique.  On Labor Day the Vincent Thomas Bridge is closed until noon for all traffic.  Normally pedestrians and cyclists are not allowed on the bridge, so this race is the one time every year that pedestrians take over the bridge and run over it twice.

Earlier this summer the race director announced that there would not be a half marathon in 2014, but that they would try again in 2015.  There would only be the 5.3 miler this year.  I had already sold my family on the idea of staying our last night in San Pedro, so I went ahead and signed up for the 5.3 miler and Sunday after the half marathon, we headed to San Pedro.

If you have never been to San Pedro, allow me just show you how beautiful the Ports of Call is. 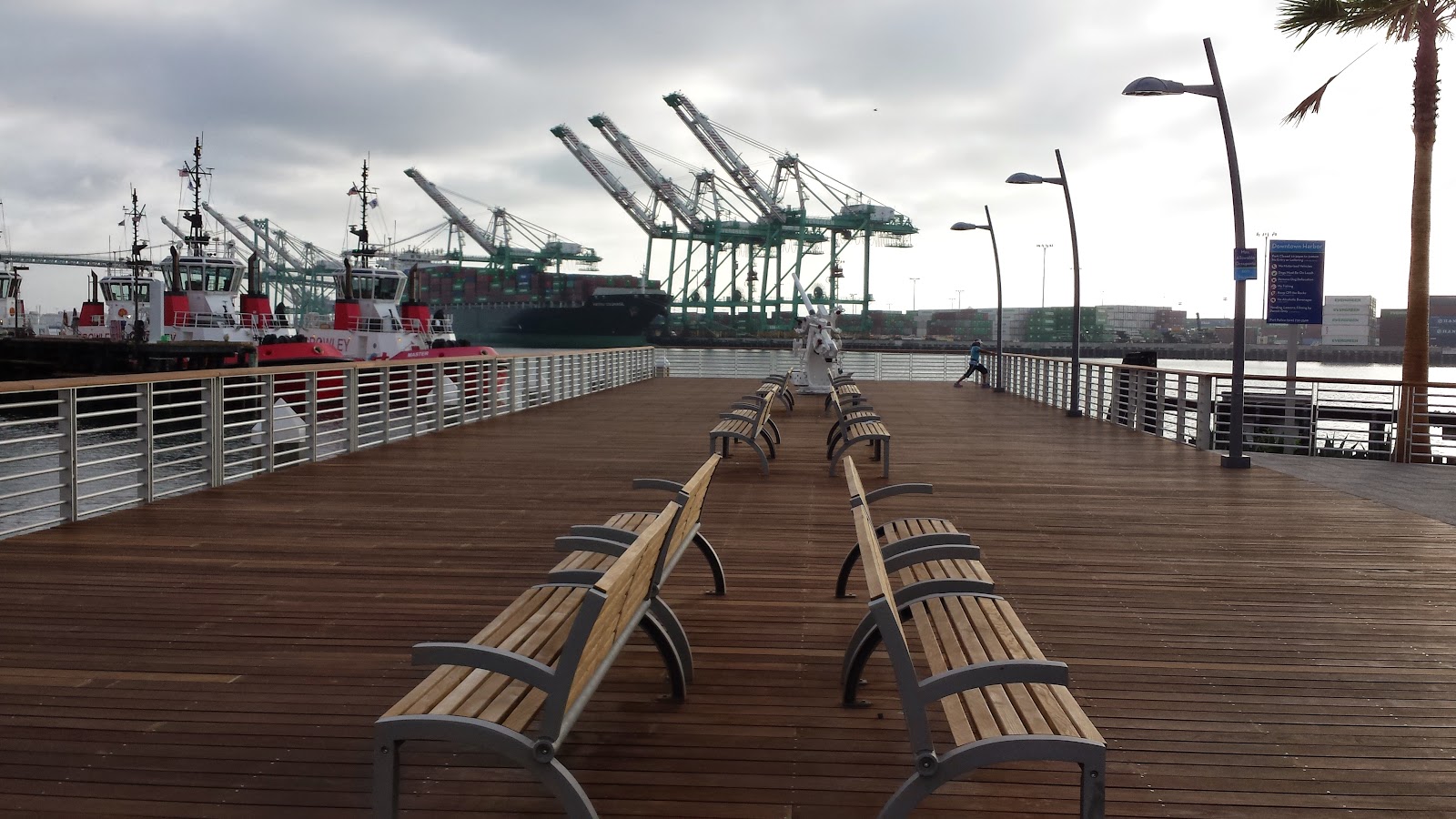 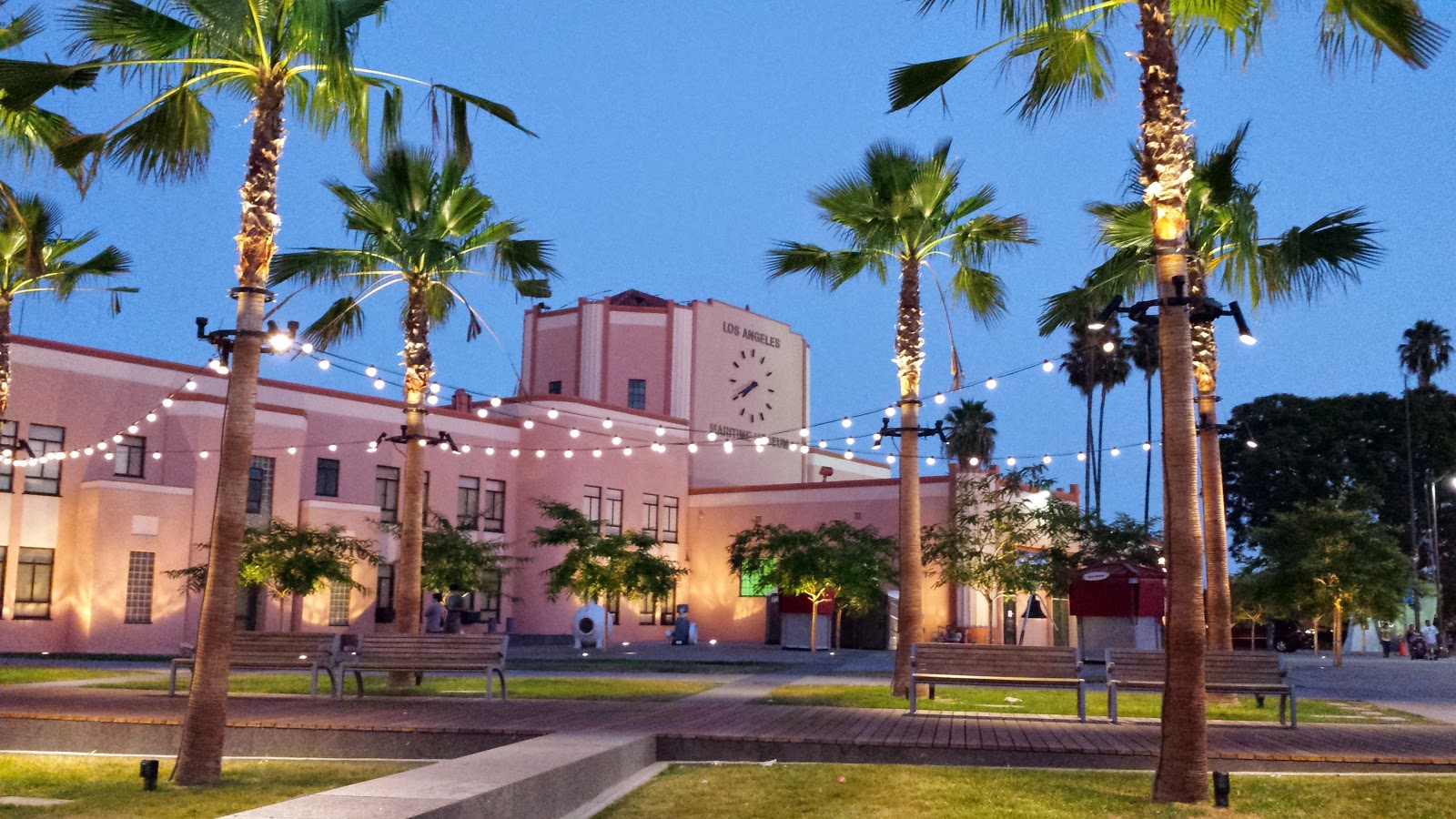 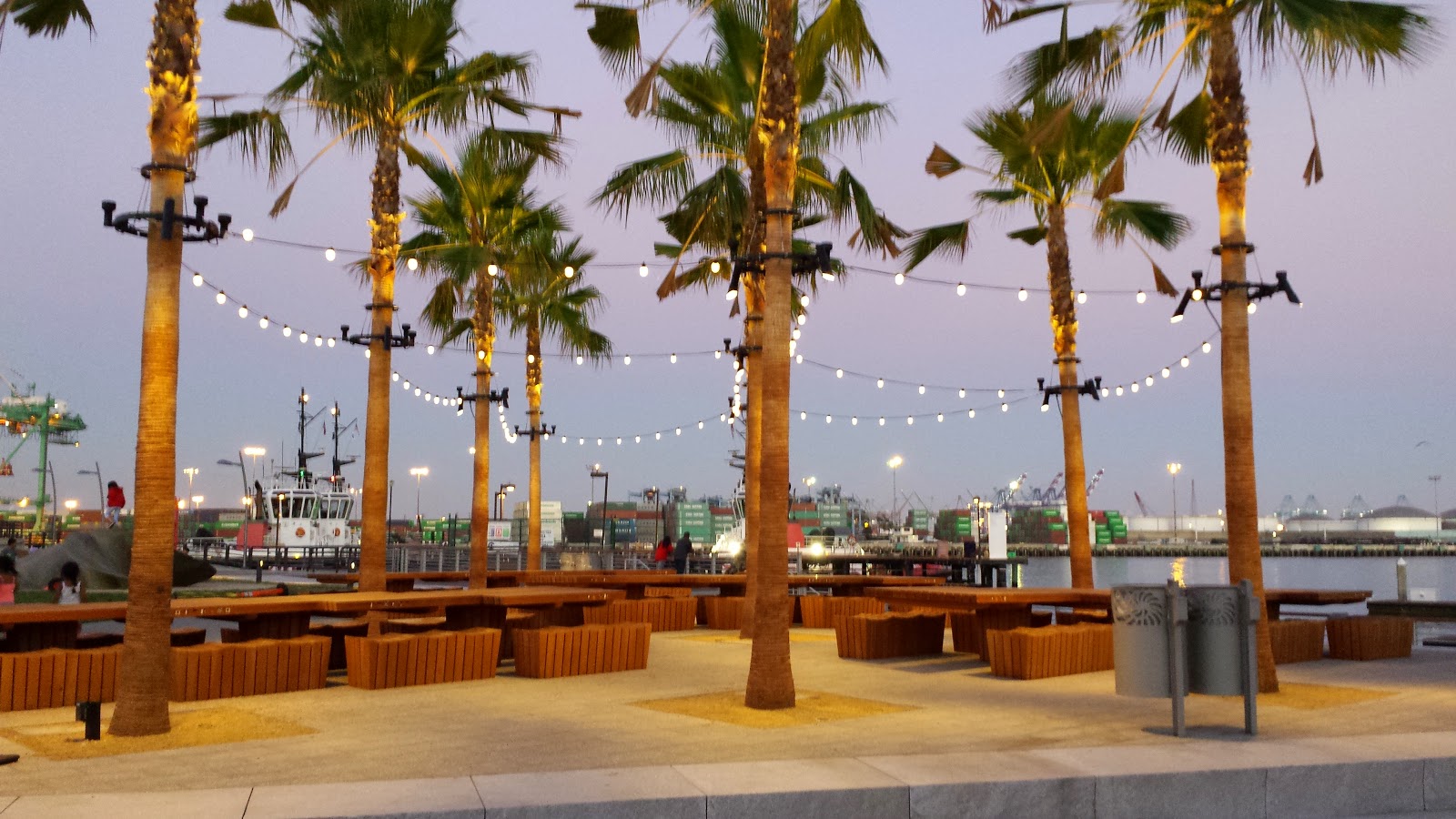 Our hotel was a quick five minute drive from the start line and this race didn't start until 8:00 a.m., so I felt like I was sleeping in the morning of the race.  Even though I had only signed up for two races at Disneyland, I ended up running three since mom had an extra entry for the 5K.  By this point in the trip I had several blisters on each foot, so I just put bandages on and wrapped them with athletic tape to provide additional cushion.

Parking was a breeze even though we arrived 30 minutes before the start.  All of a sudden, it was time to start. 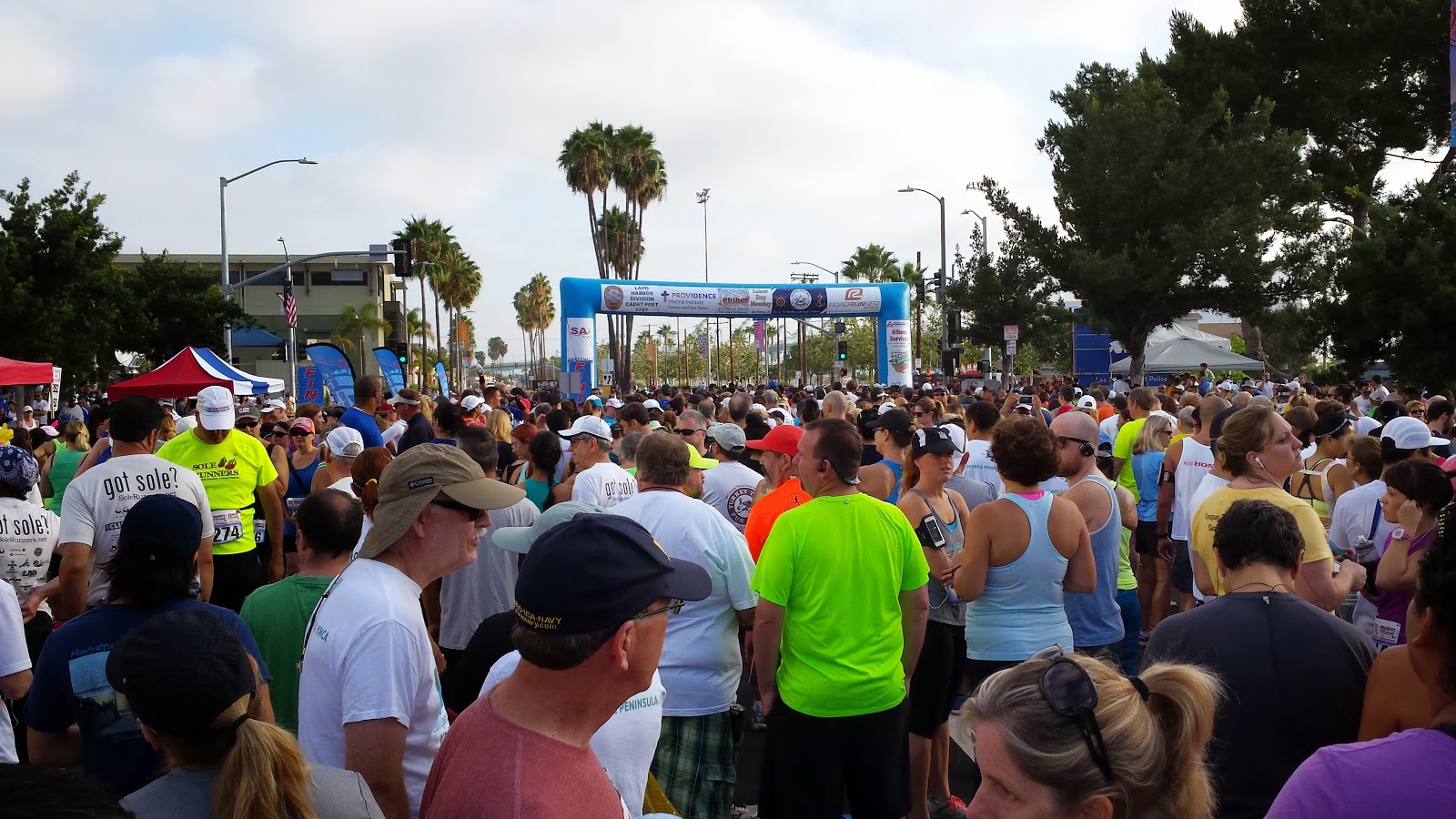 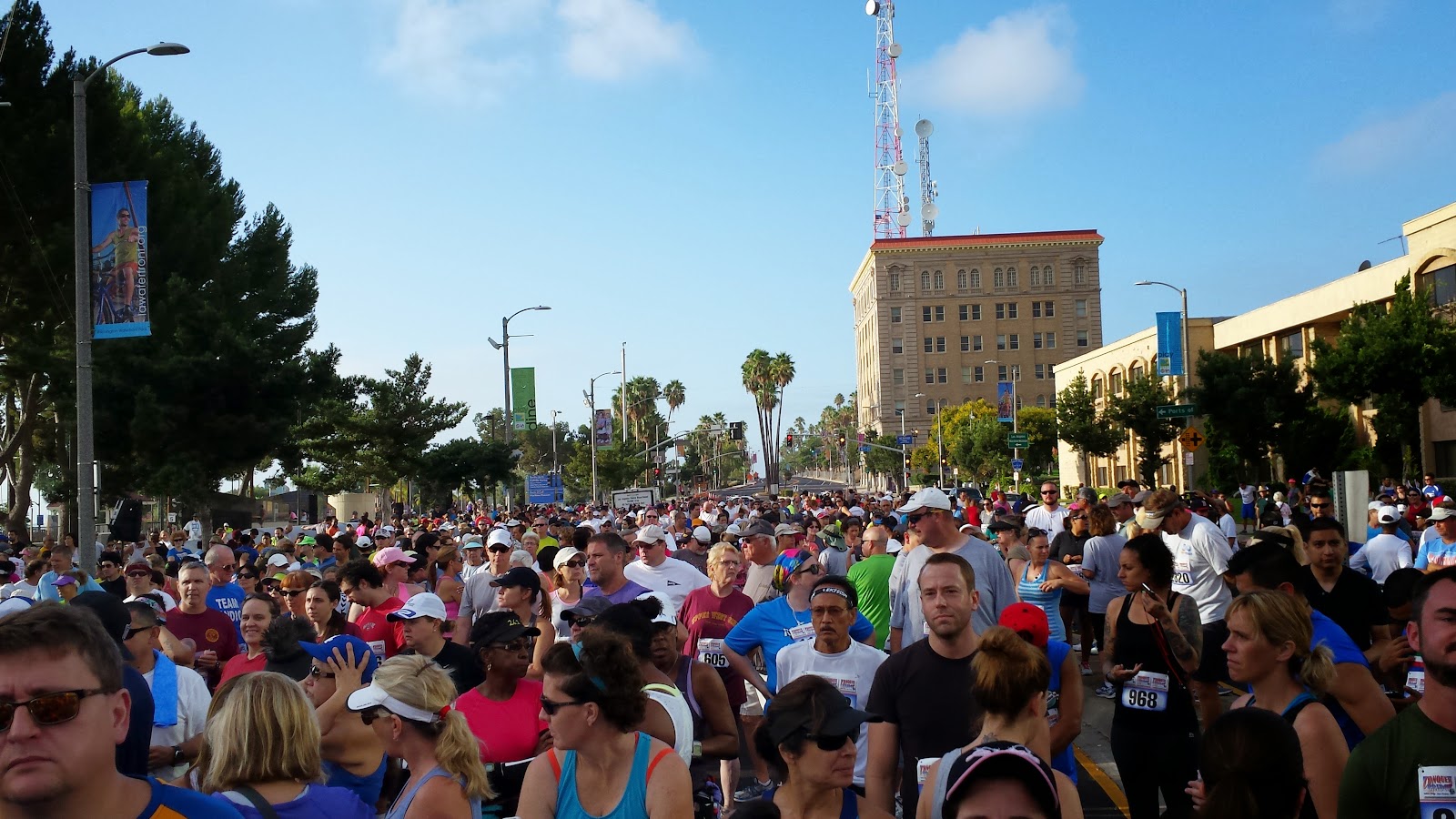 I wasn't really sore, I was just stiff but once the race started and the crowd started moving, I felt pretty good.  The race starts near the Ports of Call Village and then approaches the ramp up to the bridge.  You slowly ascend to the top of the bridge, being cautious as you cross the expansion grates (which are covered on race day for the safety of the runners), then you reach the top and have a great downhill.  At the bottom of the bridge you have a bit of flat road before a slight uphill at the turnaround.  Then you climb towards the top of the bridge again to head back.  Click here to see a great video of the course.

I made sure to stop and take a few photos because it was such a beautiful day and I was flying back to the flatlands of the Midwest in a matter of hours. 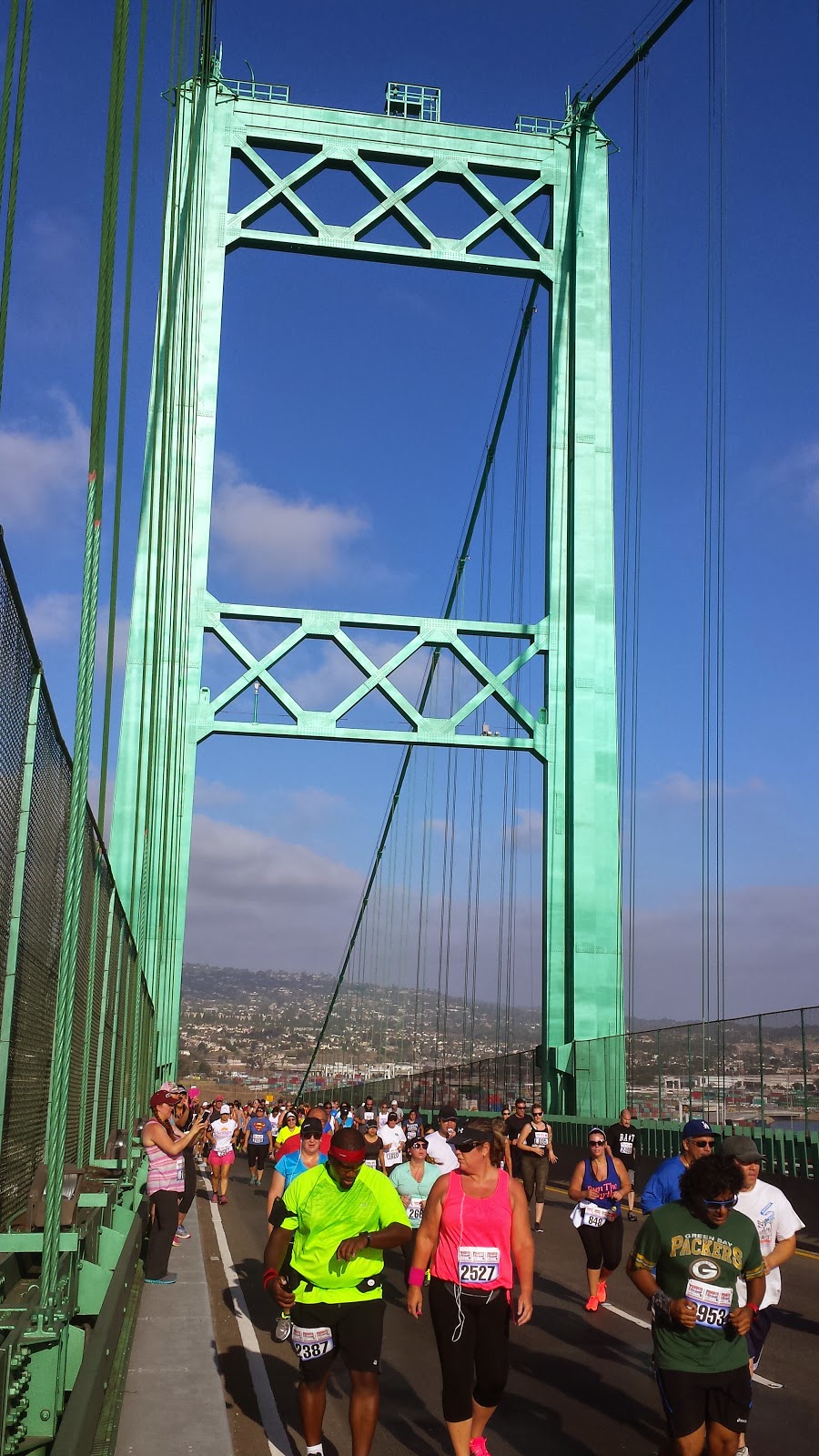 This race seemed to be over in no time compared to the half marathon the day before.  At the finish, you received a medal, water, and fruit as the crowd continued to cheer in the background.  I had told the race director that I would try to find him after the race so that I could finally meet him in person, but the finish line was too chaotic and no one was able to point me in the right direction.  I wanted to tell him how much fun I had and how much I enjoyed this race.  Although I was originally disappointed that there would not be a half marathon this year, it was actually a blessing in disguise to only be running 5.3 miles that day.  I loved the race course and the fact that this was the only time each year that runners could cross the bridge.  The scenery was beautiful as you can see from the photos, and the volunteer support along the course was very active and fun.  I would not only recommend this race to Disney runners as an add-on, but also to locals who are looking for a unique race.  At the start line, the race director did mention that it is still their intention to have a half marathon again, so be sure to check the race website and Facebook page for updates as you start thinking about Labor Day Weekend 2015.