My first Virtual Half Marathon

As I have gotten more connected with other running blogs this year, I kept seeing people mentioning "virtual races."  The concept makes sense to me now, and don't laugh, but I honestly pictured people running in place as some sort of race via video game.  This is probably because we go to Cardinals games frequently and one of their giveaways is through the Lumiere Mile, where a selected fan runs in place for 45 seconds in order to try to run a virtual mile to the Lumiere Place Hotel and Casino.  As I learned more about virtual races, I still wasn't interested because part of the reason why I love running is because I love the race experience and the journey to the cheering crowd at the finish. But this year more than any other, has made me realize that running races is not a cheap hobby!

Recently I came across a virtual half marathon through U.S. Road Running called Movie Madness and I fell in love with the medal.  I ended up signing up for that race as well as the Pirate Half Marathon, because I also liked its medal.  For less than $20 each, I received a nice race medal and bib.  Each race had its own completion deadline and you just run the specified distance on your own time and in the location of your choice.  Once completed, you post your results to the race results page and you are done!  Virtual races are perfect for those on tight budgets, runners who want to fit another race in but can't find one that meets their availability, or runners who just don't have as many race options near them.  So although I LOVED paying less than $20 for a half marathon, I also found myself missing the other runners, course support, and crowd at the finish this morning.

Of the virtual half marathons that I signed up for, the Pirate Half Marathon had the earliest completion deadline.  The medal and bib have sat in my dresser drawer for several weeks, just waiting for me to earn them.  I was getting very close to the deadline and yesterday was brutally hot, so I decided to run it this morning.  I got started a little later than I had originally planned but I was on the Katy Trail by 8:30 a.m.  It was around 80 degrees when I started, and it just got hotter as the run continued.  It was definitely one of my slowest times, but I finished.  I wore my Garmin as I always do, but I really missed seeing mile marker signs along the way.  In addition to the heat, I really felt like I cared less about my time because I wasn't part of a crowd of runners even though runners and bikers were also present on the trail. 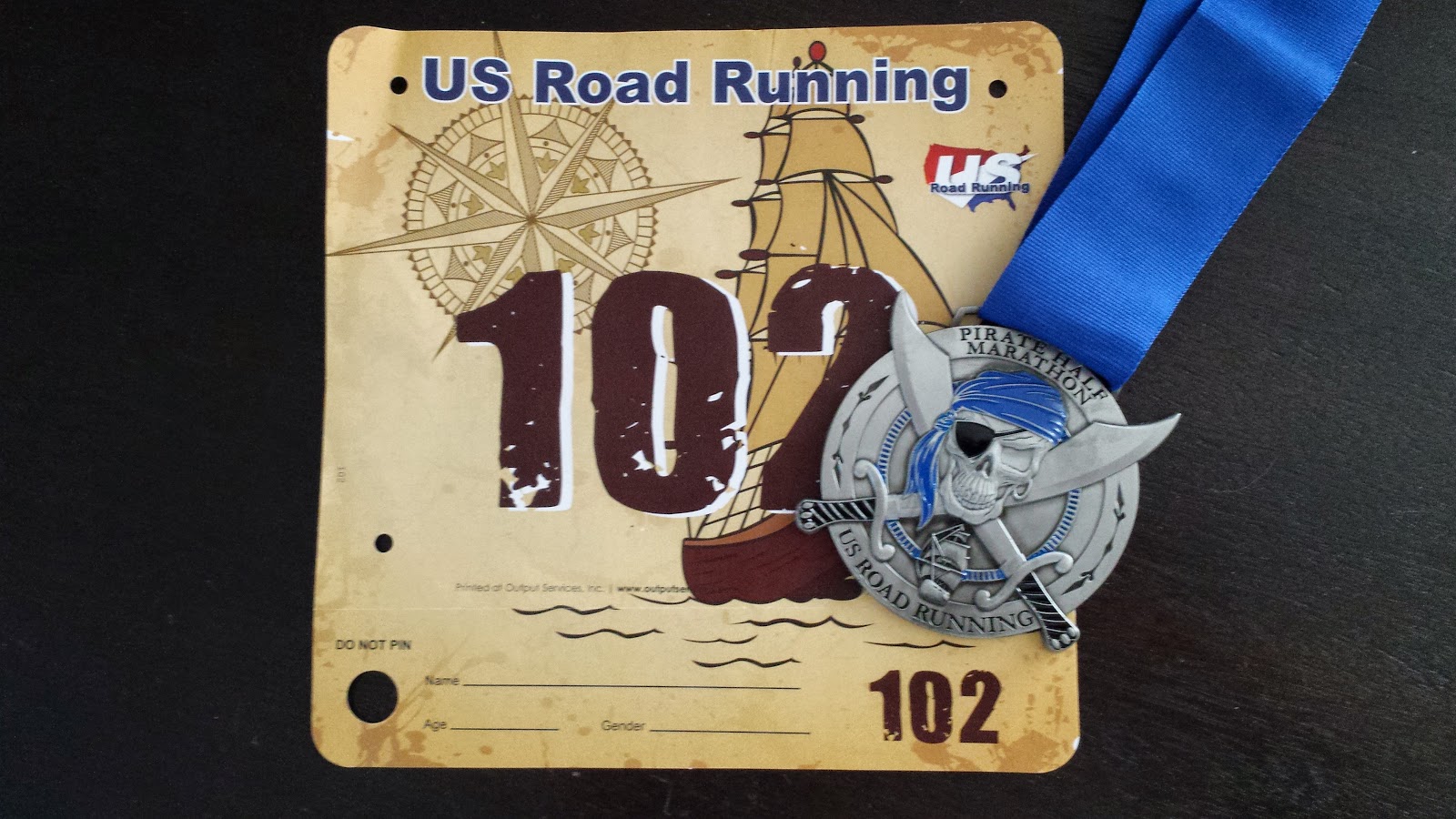 Overall I think virtual races are a great way to save money while still meeting that need to run a race, and they work well into your schedule because YOU pick the date, time, and location.  I will be running a few more virtual races this year because I want to test out different trails and parks in the St. Louis area. I am sure there are many other virtual racing companies, but I listed a few that I like below:
U.S. Road Running
I Run For...Virtual Half Marathon
Will Run For Bling
A Christmas Story 5K and 10K

Email ThisBlogThis!Share to TwitterShare to FacebookShare to Pinterest
Labels: Virtual Half Marathons