Last Saturday, May 31st I ran the Katy 80 Mile Relay with five other runners on team Rogue Runners.

I have only run one other relay, the River to River Relay in Southern Illinois in 2011 with our Rogue Runners team captain.  I had mentioned to him several months ago that I was interested in running another relay in 2015.  He came across this relay and asked if I was interested, and knew of any other runners who would want to join our team.  I was hesitant about running a relay this year because I wanted more time to work on speed, but I was free on May 31st and it sounded fun.  I found a co-worker at the gym who was interested and he found the remaining three runners and before I knew it, we were registered.

Although the date of the race was open, I didn't take into account how busy the weeks leading up to the race would be.  I had been working a lot of hours between my full-time job at the non-profit and the part-time job at the gym and then I went to DC for five days.  My flight was late returning Tuesday night and the latter part of last week had something scheduled every night, so I had no time to really research and prepare for the relay before race day.  The other five team members met up for dinner Friday night, but my family and I had gotten tickets to the Cardinals game several months ago, so I didn't meet up with the team until 5:30 a.m. Saturday morning.  As I mentioned earlier, our team captain found the remaining three runners who I met for the first time race morning, then we all hopped into the SUV and headed towards the start line at the Black Walnut Trailhead on the Katy Trail. 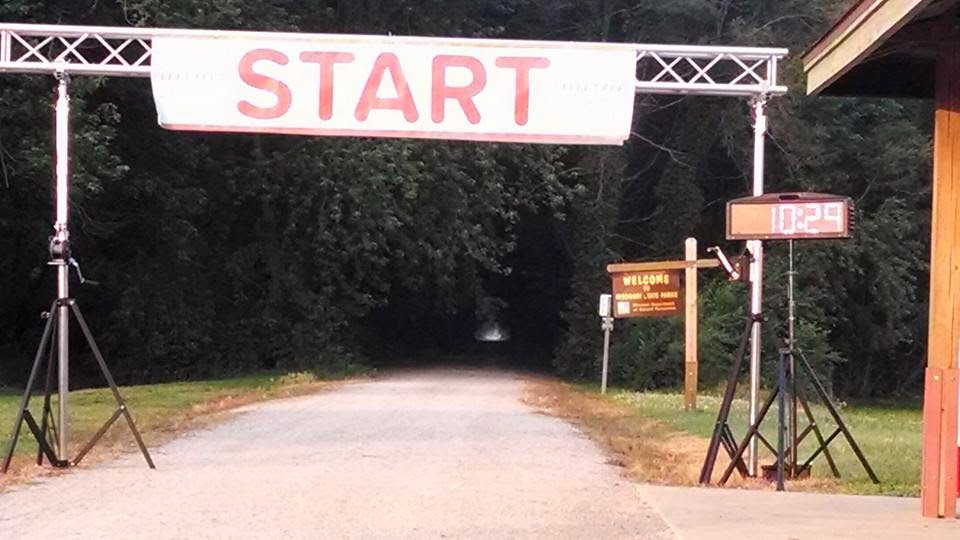 To be perfectly honest, when I got back from DC Tuesday night and saw how busy the remainder of the week was going to be, I thought: "What did I get myself into?"  When the alarm went off at 4:15 a.m. Saturday morning I was tired, dead tired.  But I got ready, got an iced tea from McDonald's and met the team at the hotel.  The relay would be my last "big race" of the spring, and then I intended to run shorter races, join a weight loss challenge, and train hard throughout the summer for my fall races.

On the way to the start line, my teammates told me that we were one of 22 teams in the inaugural year of this relay.  The race day weather forecast included a high in the 80's and a chance of thunderstorms, which meant the humidity would be HIGH.  May in the Midwest is rather unpredictable, so you tend to prepare for the worst and hope for the best.  We had plenty of snacks, drinks, bug spray, and sunscreen packed and before we knew it, the time was 6:30 a.m. and our first runner took off.  The remaining five runners packed into the SUV and headed to the first exchange.  This was the pattern throughout the day: drive to the exchange, wait for one of our runners to complete their leg of the race (distances varied), cheer during the hand-off of the timing chip to the next runner (I brought my cowbell from the 2013 MO' Cowbell race), then drive to the next exchange to repeat the process.  Below are several pictures of the exchanges along the route. 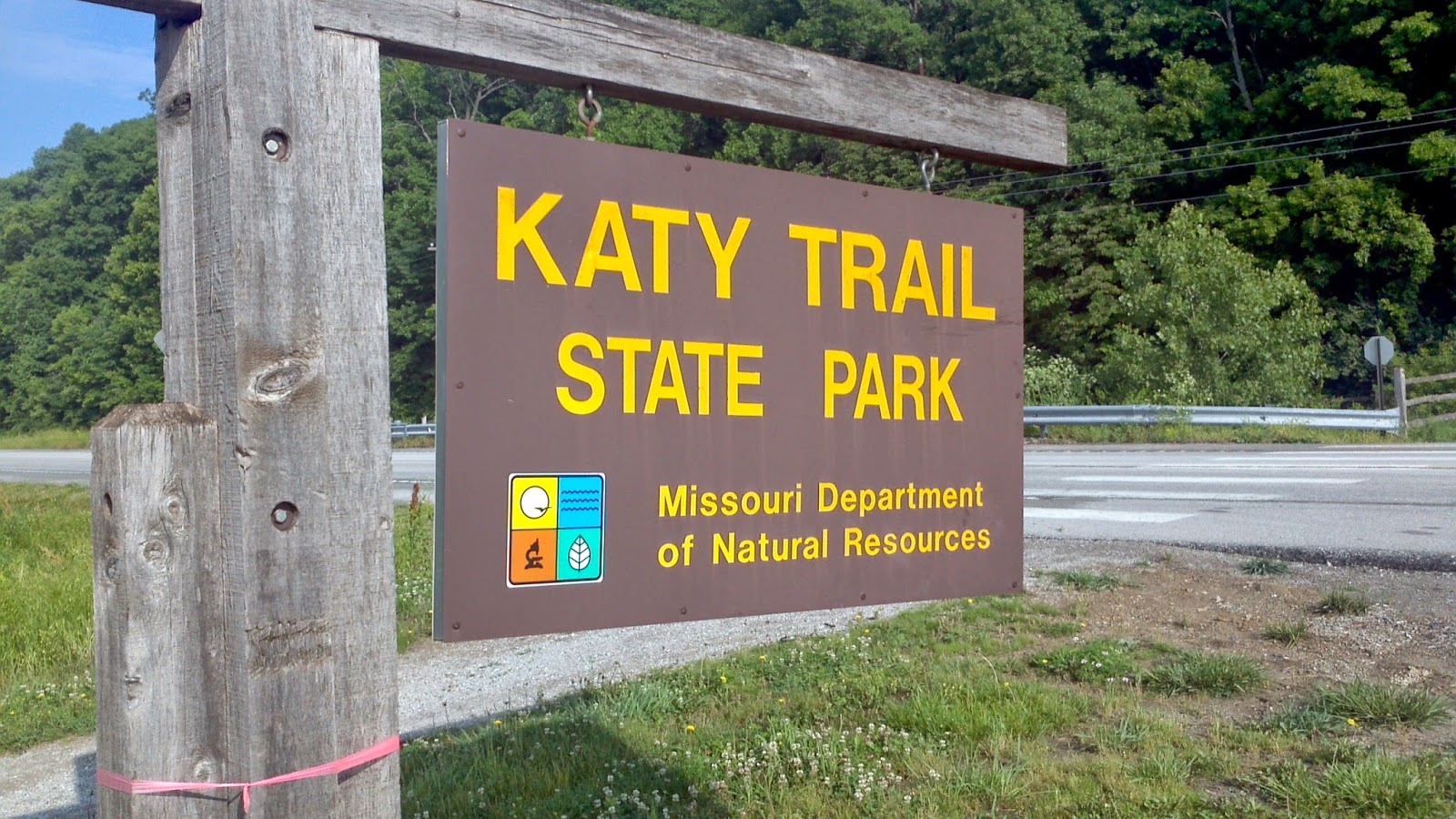 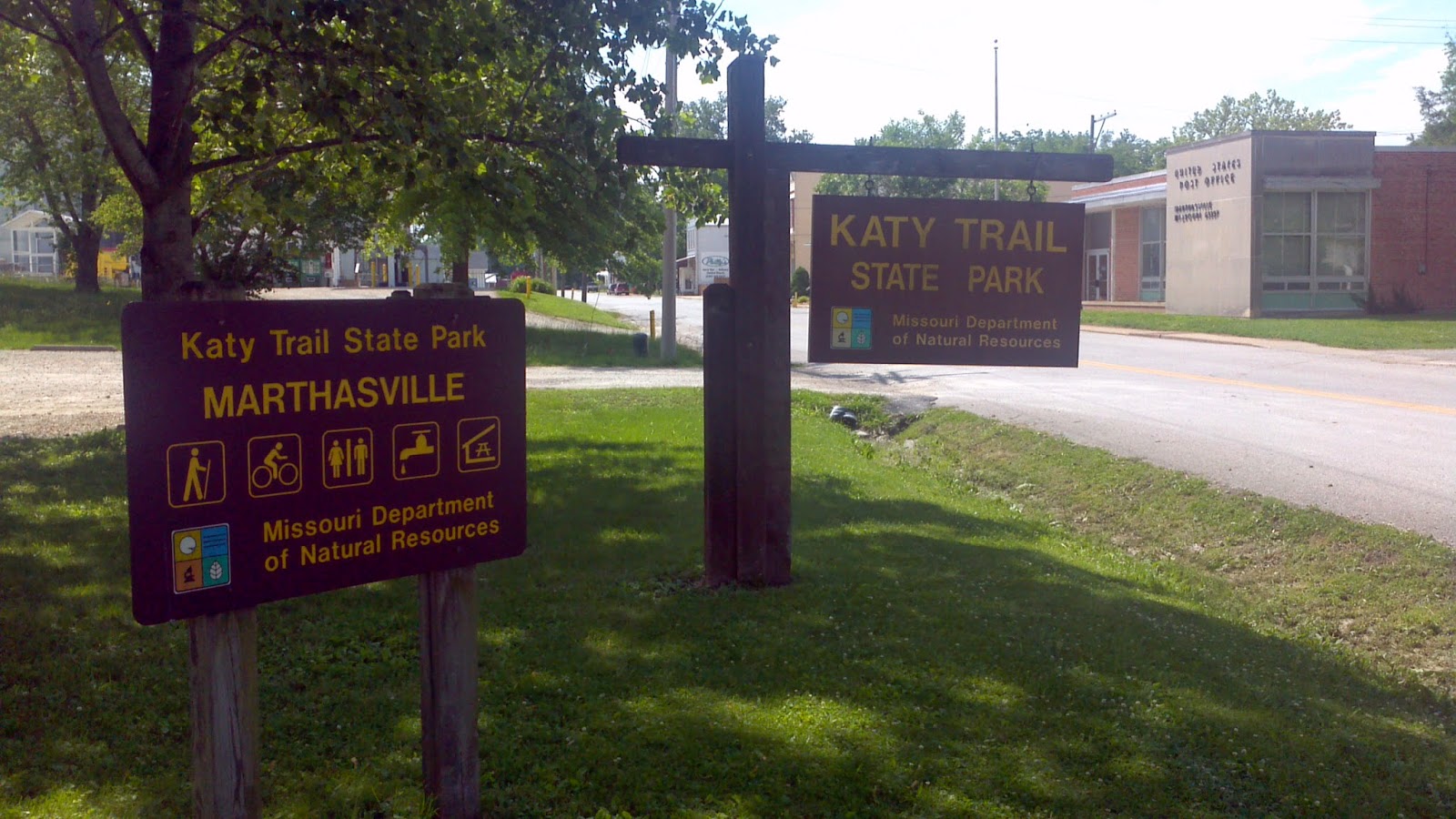 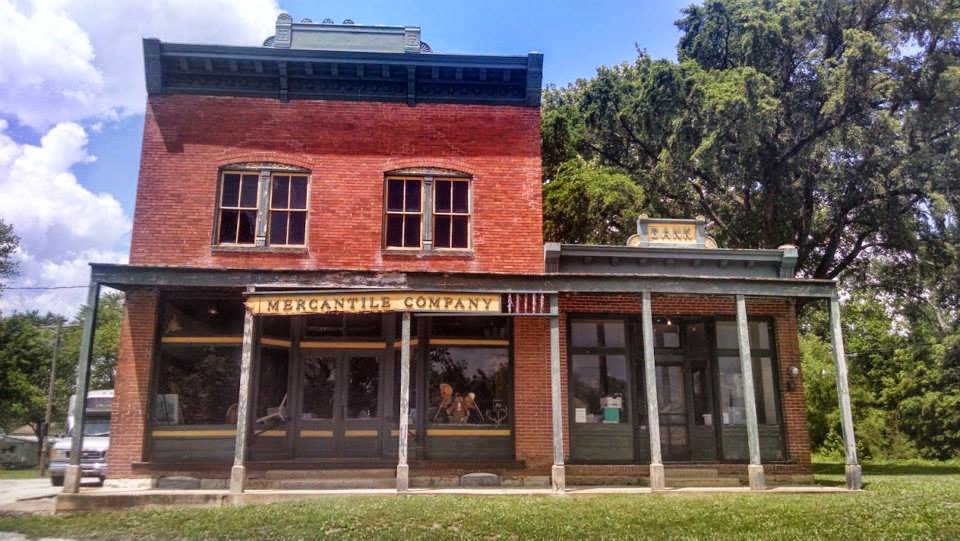 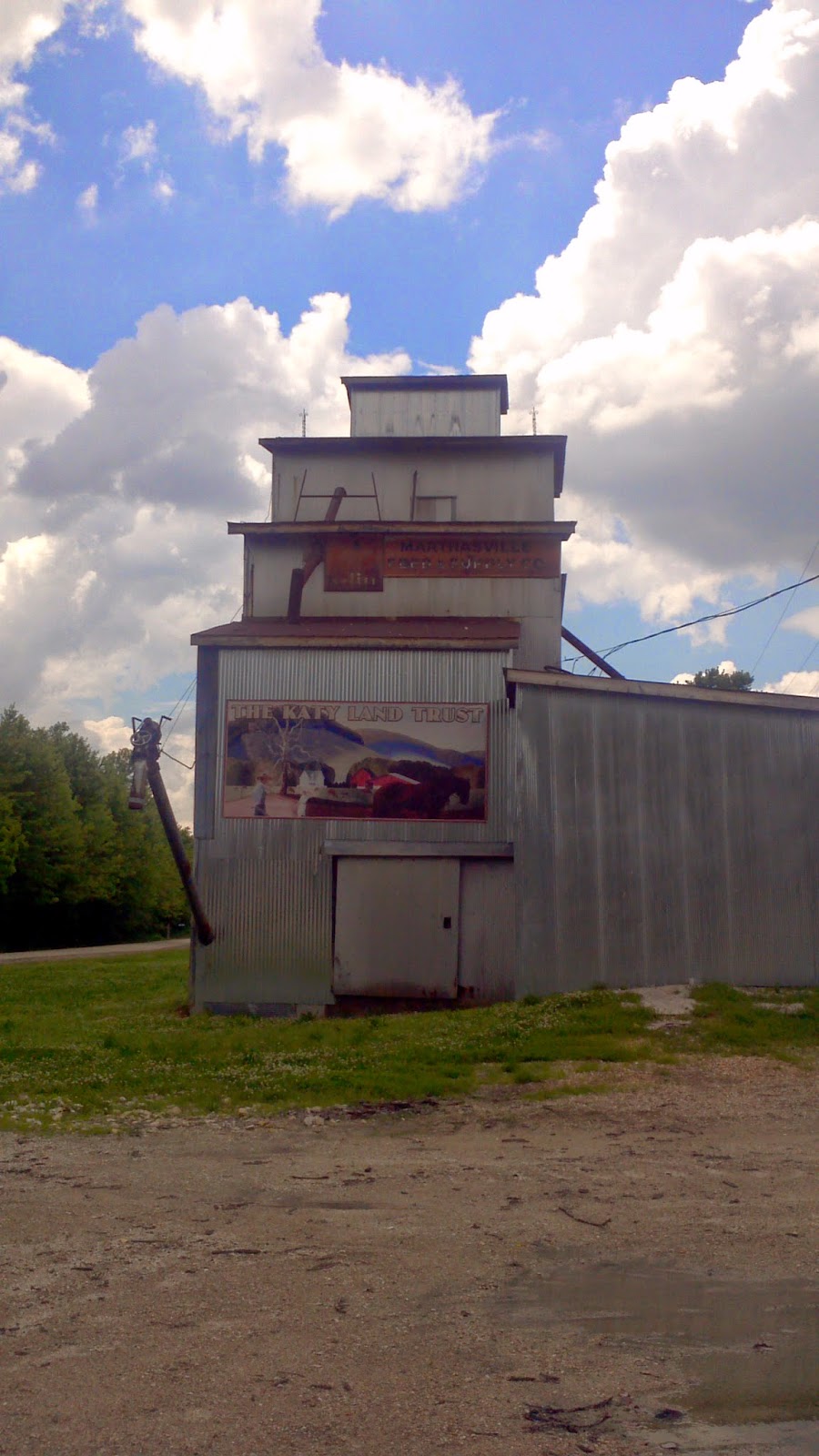 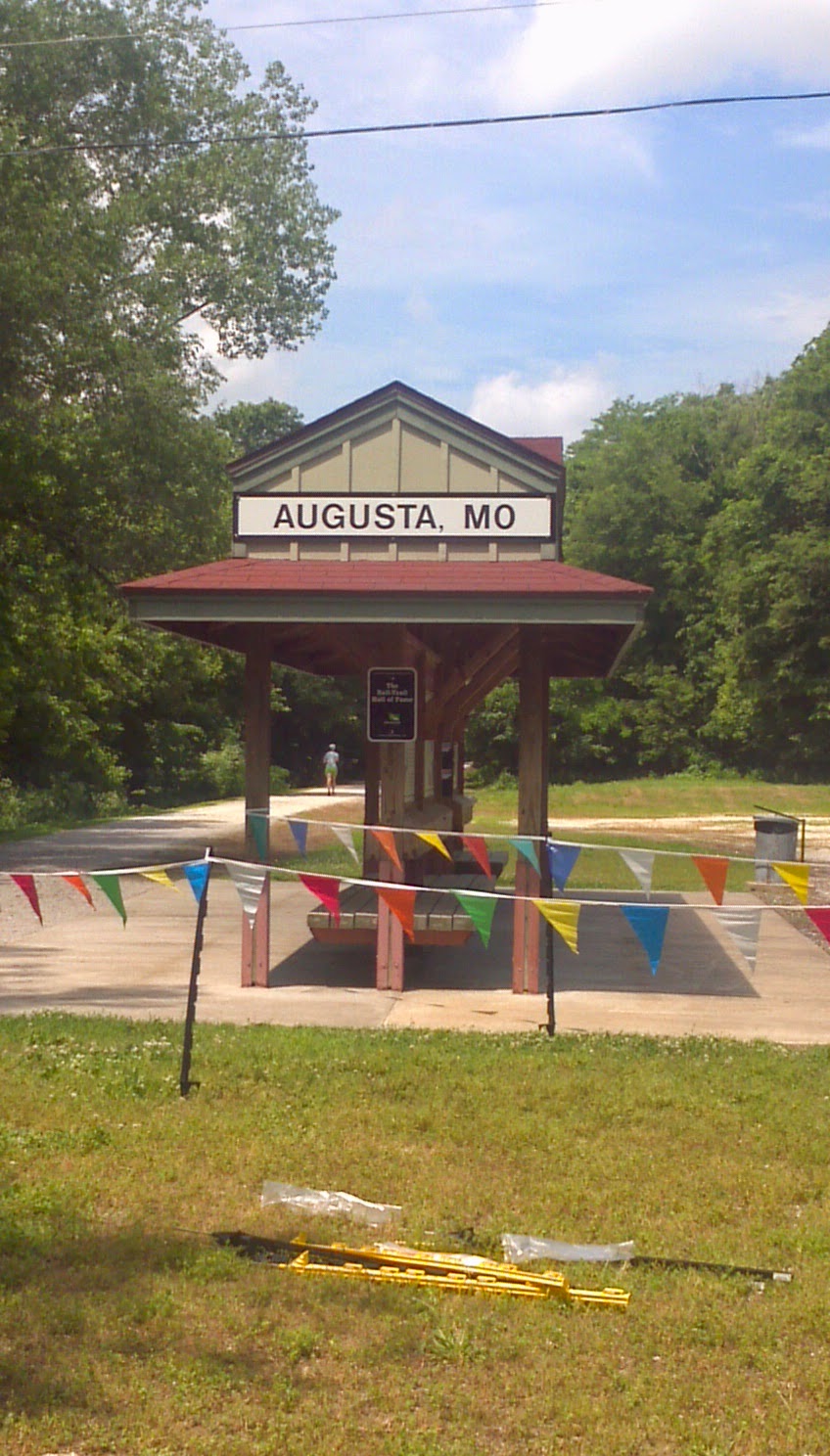 The repetitive process of dropping one runner off, cheering on our incoming runner, and driving to the next exchange actually made the day fly by.  There were 18 legs and six runners so each runner ran three legs, but the total mileage varied.  Our team captain has run MANY relays so he has the math down to a science.  To keep your overall team pace low, your longest mileage should go to your faster runners so that it averages out the slower pace runners in the end.

I was runner six because I knew I would be the slowest.  So even though my average pace was SIGNIFICANTLY slower than our fastest runners, we ended the day with an overall team pace of 9:02 per mile, making us #2 in the Coed Open Division!


On my last and longest leg of the race, I was actually sad that it was about the end.  It had been such an amazing day, and I loved the fact that I had only known two of the other five runners before the day started.  But after spending the day cheering each other on and sweating in an SUV together, you not only gel together as a team, but you also become friends.  I love running and as my blog name implies, I love running for medals. But even though this race ended with a pint glass rather than a medal, I would do it again and hope to have the same team for this race in 2015.  I was so worried up to this point about my average pace compared to my teammates paces, but in the end I contributed what I could to the team, and had a great time doing it. My teammates built me up and made me feel amazing!

Once we crossed the finish line we received our pint glass and beer coupon.  We had already received our food coupon at packet pick-up.  We had a "serious" team picture taken, followed by a team picture with props.  The race crew took these pictures, so I am anxiously awaiting those being posted, but below are a few of mine.


If you haven't run a relay, consider it.  If you can't stitch together your own team, check the relay's website or Facebook page because teams are always looking for individual runners.  Who cares if you don't know anyone else on the team!  You have an entire day (sometimes longer for Ragnar Relays) to get to know your teammates.  Then after the race, you have a new network of runners to participate in other races with.  If you don't want to run, volunteer.  The volunteers for this race varied in age, and it was great getting a few minutes to talk to them at the exchanges.  They sat in the middle of nowhere in the heat at the exchanges.  It takes a pretty awesome person to give a day to do that.  You could be that awesome.....