Yesterday my boyfriend and I ran the Creve Coeur Heart to Heart 5K in Creve Coeur, MO.  This race also included a 10K route and a Family Fun Run.  The races began at 8 a.m. and packet pick-up began at 6:45 a.m. and ran until 7:45 a.m.  Parking was right across the street from the government center, which was where the packet pick-up and start/finish line were located.  For $35 you received a nice tech t-shirt with the logo below on the front, a medal, and post-race refreshments and entertainment. 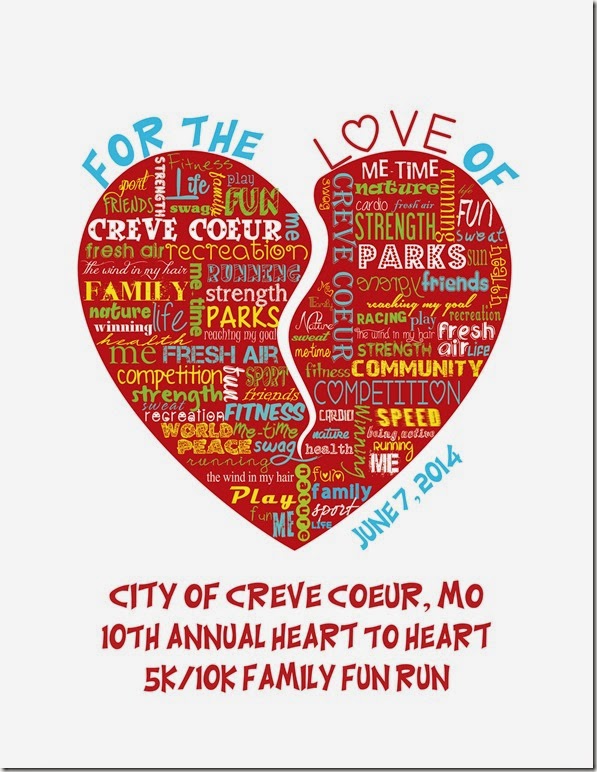 Around 7:30 a.m. a personal trainer led us through a series of stretches to get us warmed up.  The National Anthem came shortly after, followed by race announcements, and then the 10K started right at 8:00 a.m.  We started the 5K around 8:05 a.m.  The course started uphill from the government center to Olive Boulevard, and then winded us through several other quaint neighborhoods in Creve Coeur.

My boyfriend had set a goal of finishing in under 50 minutes, which I thought was doable since we would be running and walking in quarter mile intervals.  This was his first 5K, and I wanted to make sure that he enjoyed it enough to want to run more.  I know what you may be thinking, but I did not pressure him into taking up running.  He set a New Year's Resolution of running a 5K in 2014.  Now maybe he saw how my family plans most of their vacations around races and how we frequently go to magical places like Disney World, but I was completely fine with him not being a runner himself and just supporting me at a race every once in a while.  But he set this goal, so I provided him a list of upcoming races to choose from.  The timing of this race was perfect and we may move to Creve Coeur in 2015, so this race was perfect for us.......plus it included a tech t-shirt and a medal for a VERY reasonable price.

Since we were running and walking in intervals, we tended to see the same runners throughout the duration of the race.  One woman we came across was race walking, and she ended up becoming our on-course cheerleader.  We started ahead of her and then she ended up passing us.  She said something like: "Come on guys.  You are a lot younger than me.  You better finish before me."  So when it was our time to run, we would pass her and she would cheer us on.  Then we would walk again and she was super speedy with her speed walking, so she would pass us again.  Every time we passed her she would cheer us on and every time she would pass us, she would remind us that we were younger than her and encourage us to pick up the pace.  At one point, she was near us when we passed her house and she said that she was used to the hills on the course, but that they were still pretty challenging.  In the end, we finished slightly before she did and we finished 10 minuted under his original goal time!

Refreshments included oranges, bananas, bagels, and water.  Free massages and stretching were available as you heard the music playing in the background.  I think it was a great first 5K experience for my boyfriend and we managed to finish the race before the storms rolled in.  I can't reiterate enough that the race is a great deal: $35 gets you into the race, a nice tech t-shirt, a medal, and great post-race amenities.  I highly recommend this to anyone wanting to kick off their summer with a great race!