The day started very early, but it was totally worth the pre-dawn alarm.  Today I volunteered as a course monitor for the Inaugural Race 13.1 5k and half marathon. 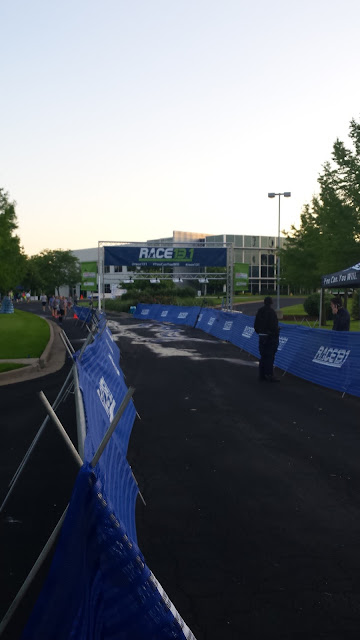 My station was right at an intersection where both races take their 1st turn and then just before runners cross mile 3 or 13.  My favorite point of the morning was when the half marathoners were approaching me to make their first turn,  It was the coolest thing watching all the runners approaching in one long wave.  I wish I would have taken a picture, but I was frozen in amazement.  They just kept coming and coming until I saw the sweeper, literally carrying a broom.  Not long after that, the 5k runners were approaching.  Again, very cool to watch them running past with all that energy and excitement.

Once all the 5k runners were on their way, I had a few quiet moments until the fastest 5k runners were running back past me as they headed towards the second part of their course.  Then there was the rush of 5k runners and then the first few 5k finishers ran past me for a third time on their way to the finish line.

The volunteer packet I received for this race not only included my neon t-shirt, but also had detailed instructions about my station including approximate times I should expect the initial wave of runners, the 1st runners from each race, and then the final runners from each race.  It was pretty much spot on.  The 5k runners were finishing up when the 1st half marathoners were passing me to finish around 8:15 a.m., which is insanely fast.  Then came the pretty constant wave of half marathoners.  Luckily, I had a great police officer with me since the course was still open to traffic and not everyone was paying attention to the runners around them.  If they completely missed my glowing neon volunteer shirt, they didn't miss the officer and his patrol car on my left.

My volunteer shift was scheduled for 6:30 - 10:30 a.m. but as 10:30 a.m. came and went, I noticed that the sweeper had not come yet.  By this point, the police officer had left so I just watched and blocked the road for the remaining runners to finish.  Just before 11:00 a.m. I saw the sweeper and a few other runners.  At that point, I thought it was safe to leave.  I could have left at 10:30 as scheduled, but I know first hand how it feels to finish when it seems like everything is being packed up and the crowd support is already gone.  I didn't mind, I just kept shaking my cowbell!  What was ironic about waiting for the sweeper, was that she actually works for the same agency that I do.

I followed the last group of runners down to the finish line to grab some snacks, and they still had plenty of water, bananas, pizza, and beer left.  I was thanked multiple times by race staff, spectators, and runners which made the experience totally worthwhile.  On top of all that, I earned enough "race bucks" today to run a Race 13.1 race at any of their locations!!!!!  That is an amazing deal considering that it has taken me 2 and 1/2 years of volunteering to earn a free half marathon through the GO! St. Louis volunteer program.

Check out Race 13.1's remaining 2016 races here, and please consider giving back to the community you love so much!

Runners, also be sure to post race reviews for all of your races on Bib Rave.
Posted by Bree at 2:03 PM