#24 - Walt Disney World Wine and Dine Half Marathon and 5K

I spent November 8th - 11th at Walt Disney World for Epcot's Food and Wine Festival and the Wine and Dine Half Marathon.  It was a quick weekend trip, but completely worth it.  Saturday morning began with walking the 5 K with Mom and John.  Well...we started out together but I really wanted to get ahead of them so that I could take photos of them finishing.

Mom started walking 5 K's shortly after I ran my first half marathon in Baltimore.  She needs a double knee replacement, so I believe that walking these 5 K's helps her feel a sense of control as well as accomplishment.  She gets the same rush that I do at the finish line when she receives her medal and has done so many 5 K's now that she is on her 2nd medal bar.  As a result of her new decor, John wanted to start walking 5 K's too.  Now the majority of our vacations revolve around races, just like the Wine and Dine weekend. 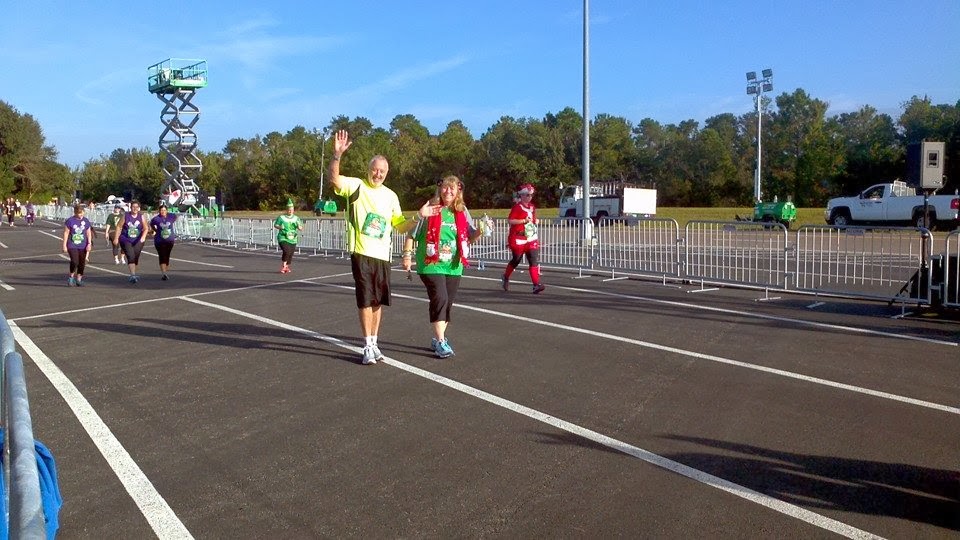 This was half marathon #24 for me, and the warmest half marathon I have ever run.  I have run "winter" races at Disney, but never a fall race.  The weather was nice considering I was coming from the Midwest where we had highs that week in the lower 40's.  The Wine and Dine Half Marathon is run at night so one would assume that it would be nice and cool.  This particular weekend, the highs increased with each day that passed.  At the starting line at 10:20 p.m. the temperature was in the high 70's.  Perfect November weather but when you run, it feels 10-20 degrees warmer.  Our race shirts had long sleeves.  As I mentioned before, I NEVER wear a race shirt before I complete the actual race.  I am convinced it is bad luck.  But I also knew better than to wear a long sleeve shirt during a race where the temperature was in the 70's.

I felt really good throughout the race, even though I had been nervous all day about how I should eat for a night race.  The course was fairly well lit, but you did have to pay attention to the road and other runners, especially since the course can often get crowded with the 12,000 + runners.  Mile 12 I was still feeling awesome and the adrenaline was starting to kick in.  The problem was, my trusty satellite watch was off by a bit over .1 miles.  I have run half marathons before where they do not put a mile marker 13, since you are so close to the finish that you can usually see it.  So when my watch said I was at 13 and I saw the laser lights and heard the music booming, I started sprinting as if I were being chased by a lion.  Then I passed mile marker 13.  I silently said a few curse words and kept moving as fast as my legs would allow me towards the actual finish line, .1 miles away.  Finally I crossed the finish, proceeded through the shoot to get my medal, food......and wine.  Once I found my parents I sat down to stretch and proceeded to drink my hard-earned wine.  As I did so, I had one of my personal trainer/co-worker's voice in my head reminding me that I am dehydrated and that I should take it easy with the wine. I was ready to get to the after party, so I didn't listen to that voice for very long.

The Wine and Dine Half Marathon exclusive after party makes the race worth the cost, the flight, and the hotel stay.  I finished after midnight and they kept Epcot open until 4 a.m. for half marathon finishers and family/friends who buy tickets.  I can't remember seeing any kids.  There was always less than a ten minute wait for rides.  You started with a $10 gift card to use at the various vendors and the "tastes" at each vendor were very reasonably priced.  I can't put to words how amazing those few hours in Epcot after midnight were.  Somehow we made it until closing at 4 a.m. and I vowed to run this race again.  AMAZING! 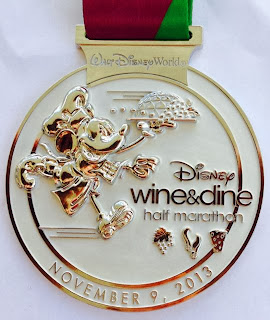