The Saturday after Thanksgiving I ran the Go Scouts Go: Run for Cookies 5k in Maryland Heights, MO.  Just like the Olivette Turkey Trot, I have known about this race for years but just ran it for the first time this year.  Also like the Olivette Turkey Trot, this race course was VERY close to where I live.
What I really loved about this race was the option to save money by not getting a race t-shirt.  If I remember correctly, it saved me $5 (which I just used towards my pre-race Starbucks).  I opted to pick up my packet on Saturday at the Des Peres Fleet Feet and it only took a matter of minutes to get my bib.
This race course is close to my home but it is also right off of I-270 and Page Avenue, so it is super convenient for locals.  The race started at 8 a.m. so I was parked by about 7:15 a.m.  It was a bit chilly again that morning, so I just waited in my car until 7:50 and I walked right up to the start line.  This race had corrals that were released roughly three minutes apart.  Since I couldn't remember which corral I signed up for,  I just started in corral two.  The race course took us through the industrial park area of Westport Plaza, which was surprisingly hillier than I expected or was prepared for.

Right off the bat I felt slower than I did at the Turkey Trot.  I just felt sluggish, so I started my intervals a lot earlier at this race.  Once the flow of runners started to thin out, I kept pace with a couple pre-teen Girl Scouts.  They would run while I was walking and I would run while they were walking.  Eventually there was one Girl Scout running alone after her friend ran ahead, and we started talking.  We talked about the hot chocolate at the finish and she reminded me that there would also be Girl Scout cookies.  We talked about the new Girl Scout cookie, which I had not tried yet.  Talking to someone else, especially about Girl Scout cookies, was a welcome distraction from feeling sluggish and it honestly helped me finish the 5k faster than I would have otherwise.  Despite feeling much, much slower than I did at the Turkey Trot I ended up only being 34 seconds slower, so I was very happy with my time.  Once you crossed the finish line you were greeted by volunteers, a medal, and water.  Then back in the parking lot were the much anticipated Girl Scout cookies and hot chocolate.  They had my favorite cookie the thin mints, so I was beyond excited! 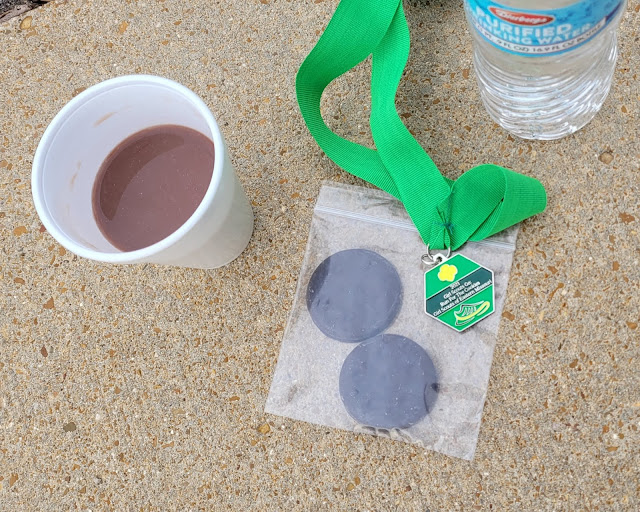 After the race as I was stretching, I was approached by a fellow runner who thanked me for keeping her at a good pace.  I guess she is like me and tries to find someone to pace with to avoid running too fast, and also finding someone to follow for motivation.  It was a nice compliment and I even turned around to make sure that she wasn't talking to someone behind me.  I am normally silent and don't talk to anyone during a race unless I am running it with a friend. This was a nice change and I just left the race feeling really happy and excited for the next 5k.
Posted by Will Run For A Medal at 8:03 PM