I finally felt comfortable enough to run an in-person 5k this morning, the annual University City Memorial Day 5k!  I last ran this race in 2019 when there was also a 10k option and my running buddy and I decided that running a 10k untrained was a good idea.  Oops!  So this year's 5k race was much more manageable and we felt great afterwards.

We initially rushed to register for this race because there was a lower cap of around 300 runners but with the updates to the CDC recommendations for vaccinated individuals, the cap recently increased to 700 runners.  This year the start line and finish line were separate, porta-potties were spaced out, volunteers and police officers were all wearing masks, runners were assigned to corals based on their estimated pace, and four runners started at a time and were staggered a few seconds apart.  In the Covid-era I have been overly cautious and basically became a hermit, but this race setup felt safe to me.

There were two packet pick-up options available: one the day prior (Sunday) and on race day.  Both packet pick-up options were outdoor this year as well.  Our start time was at 7:30 a.m., but we still arrived and parked around 6:30 a.m. since Coral 1 was supposed to start at 7:00 a.m.  The start ended up being delayed by 15 minutes due to a police situation on the course, but everyone went with the flow and our coral ended up starting just eight minutes late.  The delayed start gave us some time to take pictures of the area and explore a bit, which was nice.  We estimated that our overall pace would be in the 14:00 range, but we ended up with an overall pace of 12:57 so we were pretty excited.  Unfortunately all of the snacks were gone when we finished, so we just celebrated with breakfast at a nearby Starbucks instead.

The University City Memorial Day 5k is a great race to kick off your summer with.  It's usually humid and warm on race day but in 2021, it was absolutely perfect with temperatures in the high 70's and low humidity.  I highly recommend this race and hopefully in 2022 they are able to get back to having various food and beverage vendors on-site after the race, ESPECIALLY Fitz's! 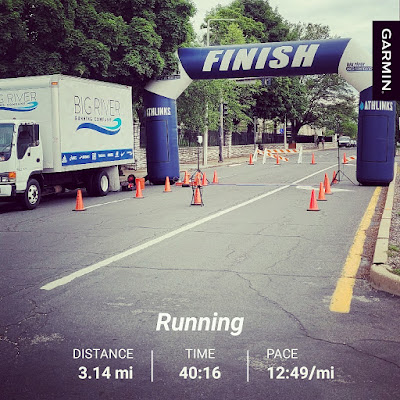