Last weekend I ran my 2nd Monumental Half Marathon in Indianapolis and within my first sentence I just want to say that I recommend this race!  First of all, I like Indianapolis.  Downtown Indy is clean and well designed.  There is a shopping mall with a movie theater as well as numerous bars, restaurants, hotels, museums, the zoo, a beautiful canal, and sports stadiums/arenas.  Every time we run a race in Indianapolis we stay at the Crowne Plaza - Union Station.  The expos for both the Indianapolis 500 Mini Marathon and the Monumental Marathon were across the street, so you can't beat the location.  Much of downtown Indy is also connected by skyways so we didn't even have to walk along the street to get to the expo, we just took the skyway.  Below are several pictures of the "ghost people" found throughout the hotel.  They represent travelers past. 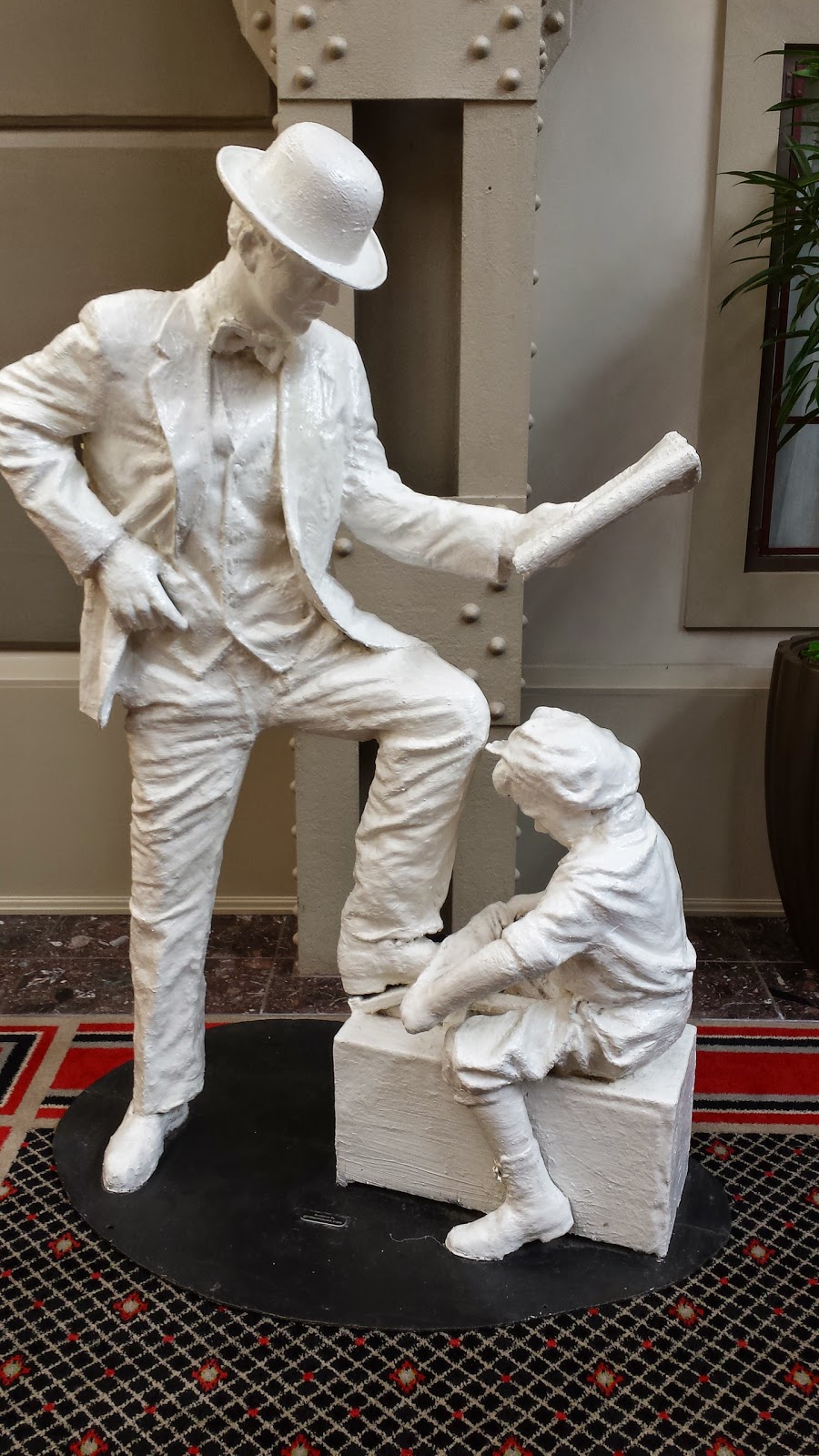 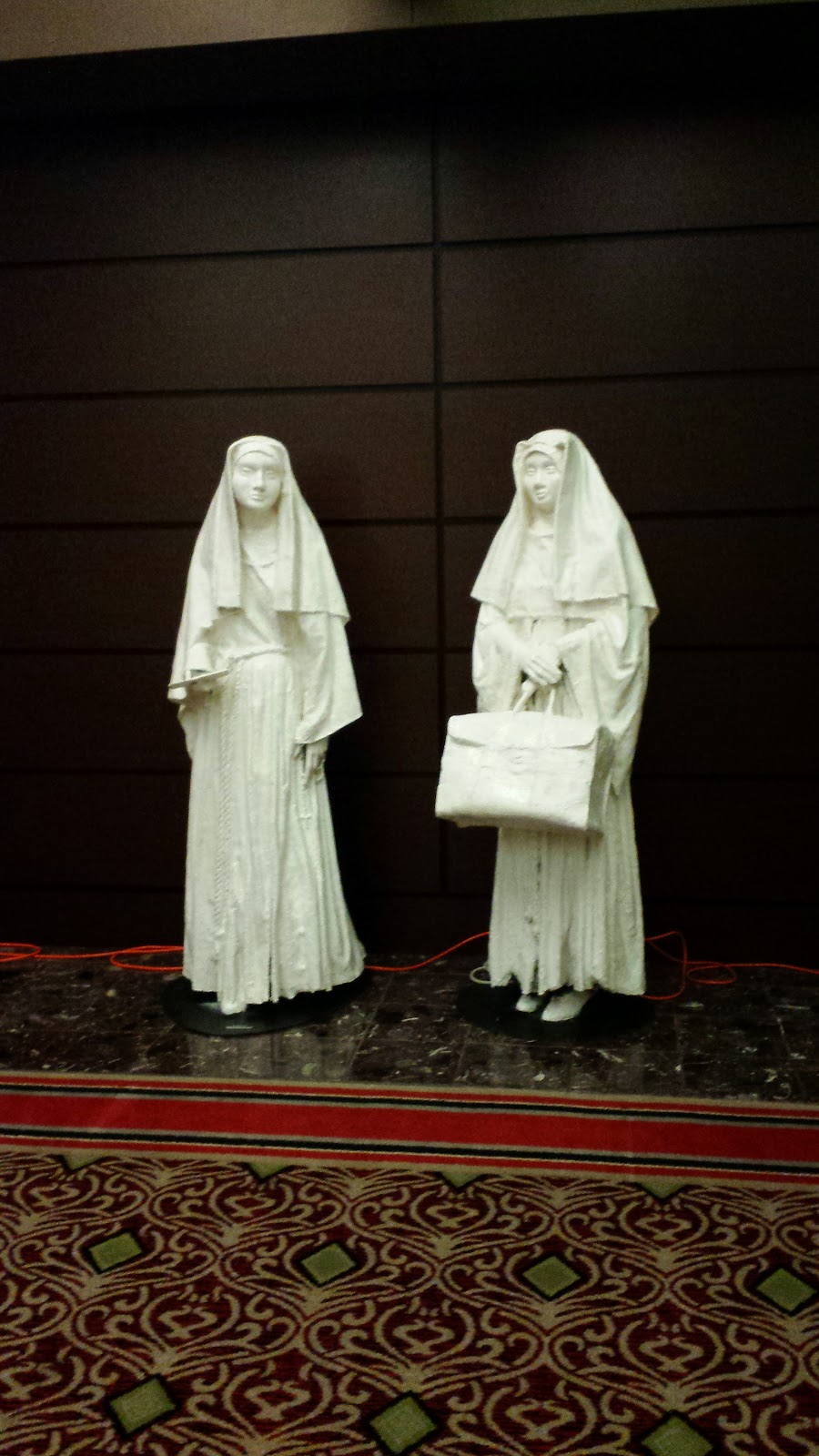 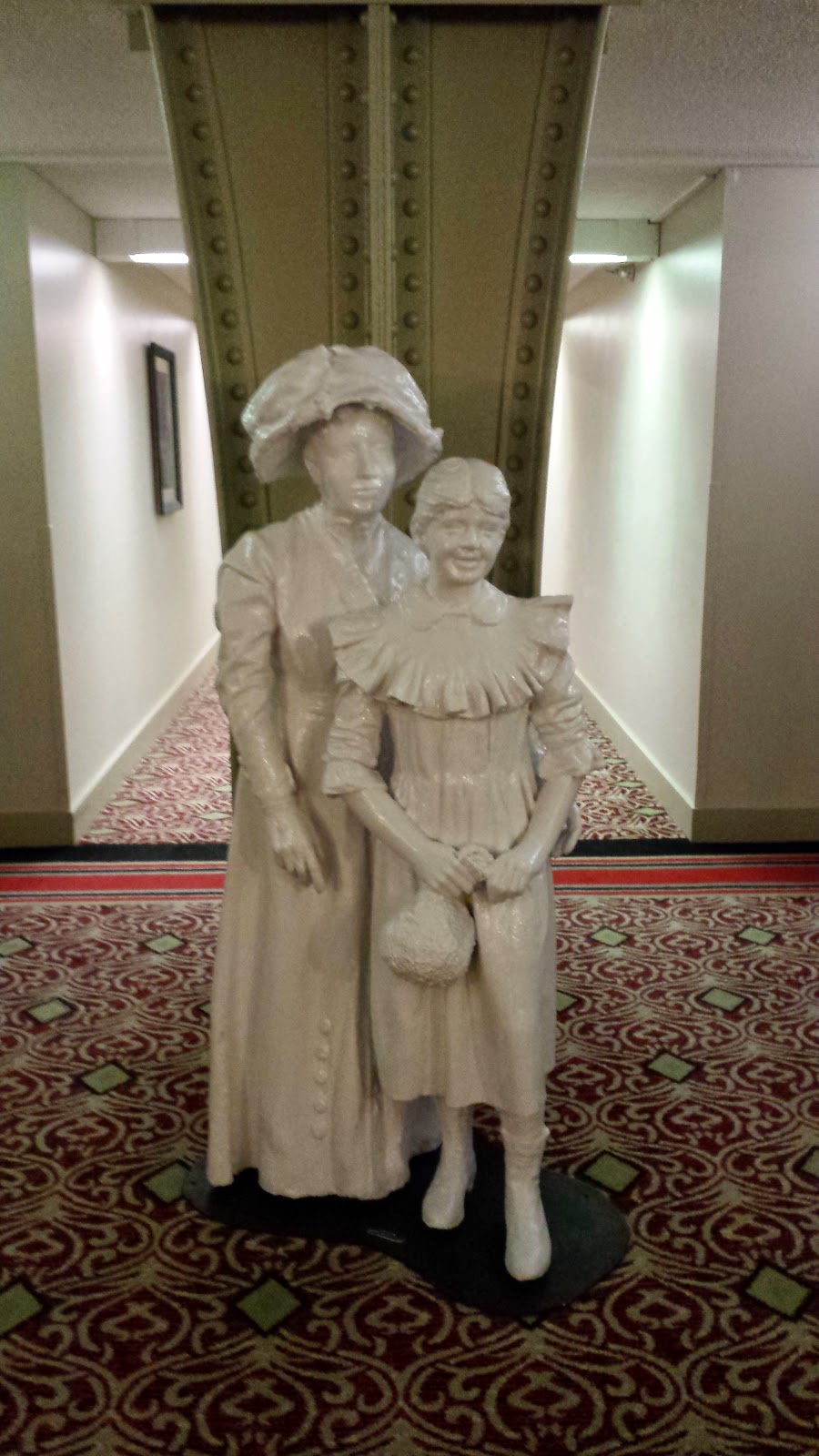 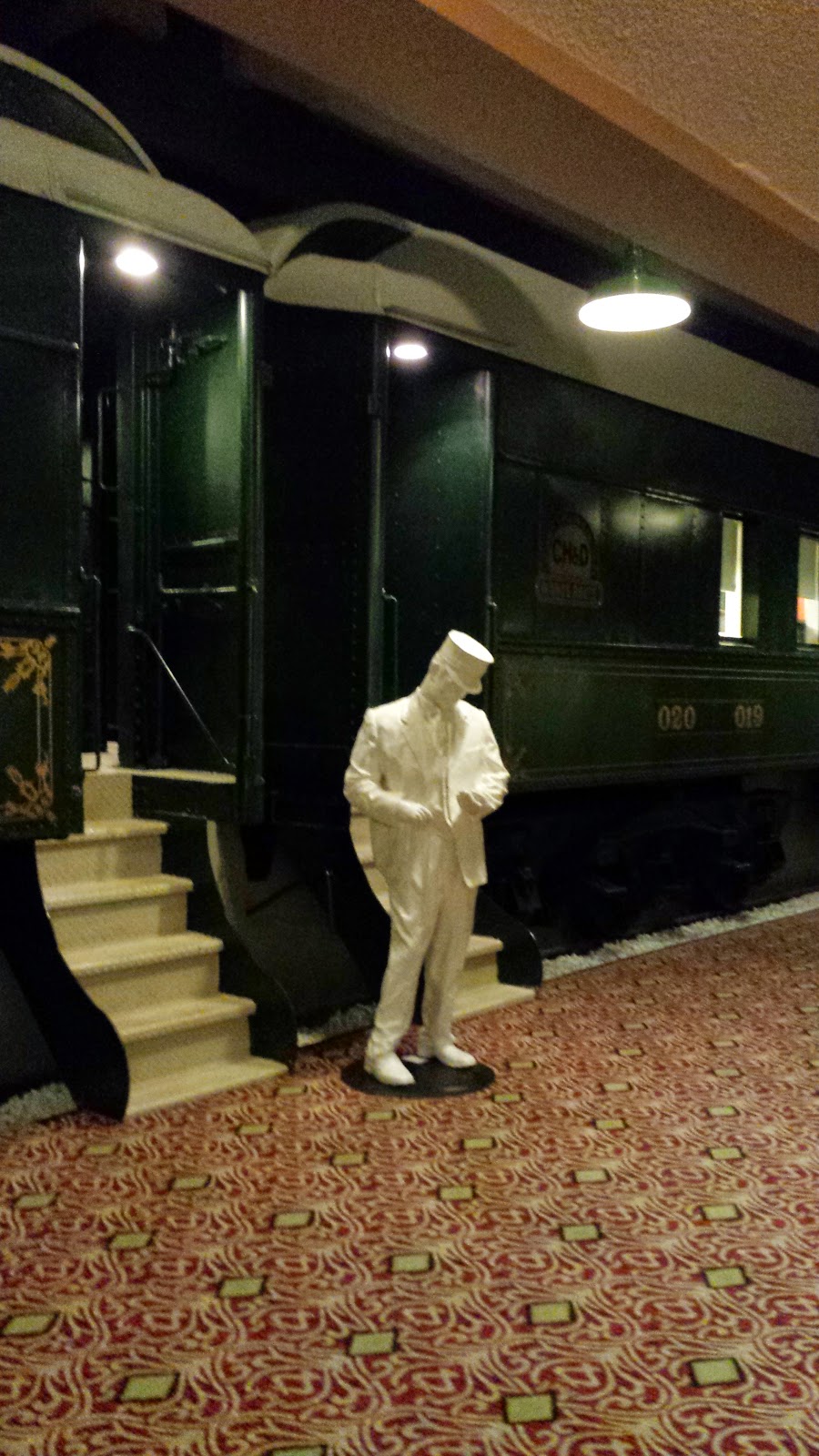 The Crowne Plaza is still part of an active train station so at times, you do hear the rumbling of trains coming and going.  On the 2nd floor you will find the train rooms, which are train cars converted into hotel rooms.  These cars rest on Union Stations original train tracks.  We have stayed in them once and although they are more expensive than the typical room, I think they are worth the splurge.

As I mentioned on my Facebook page, the Monumental Marathon happened to fall on the very last weekend the Terra Cotta Warriors exhibit was in Indianapolis.  The exhibit was at the Children's Museum which is worth a visit, just make sure you have plenty of time to spend there to justify the $20 admission.  The exhibit was an additional $10 on top of the admission, but it was worth it. 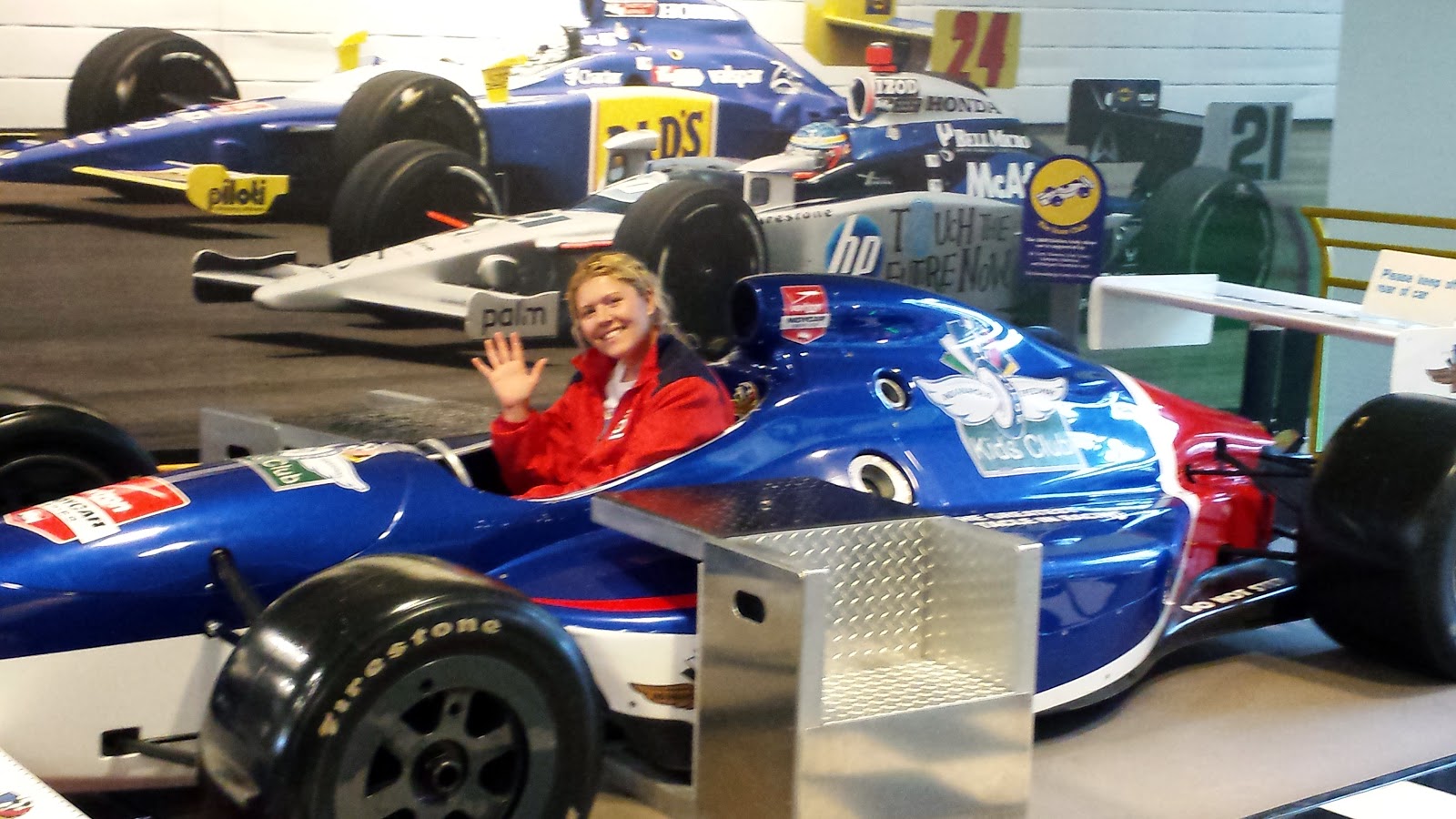 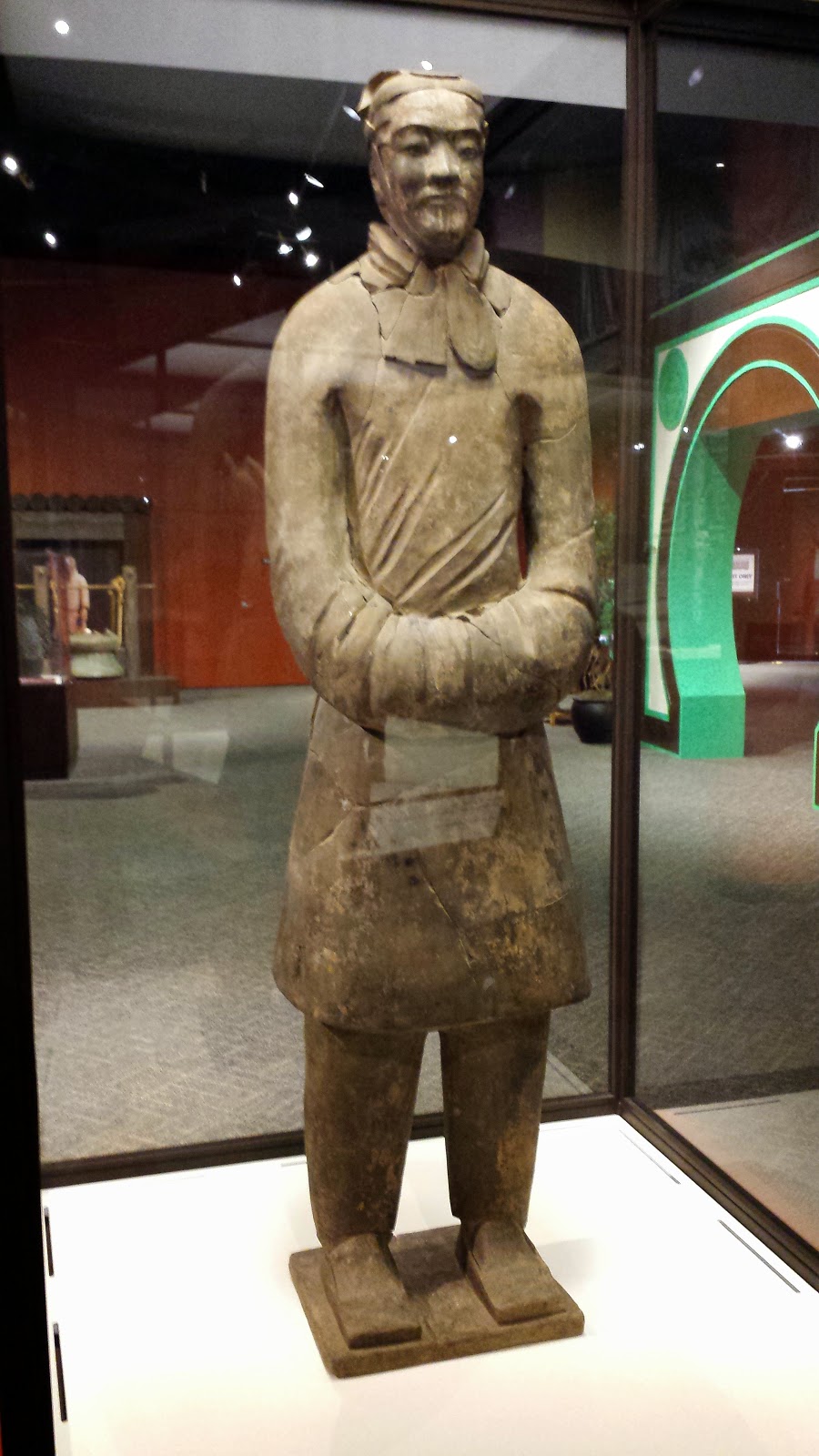 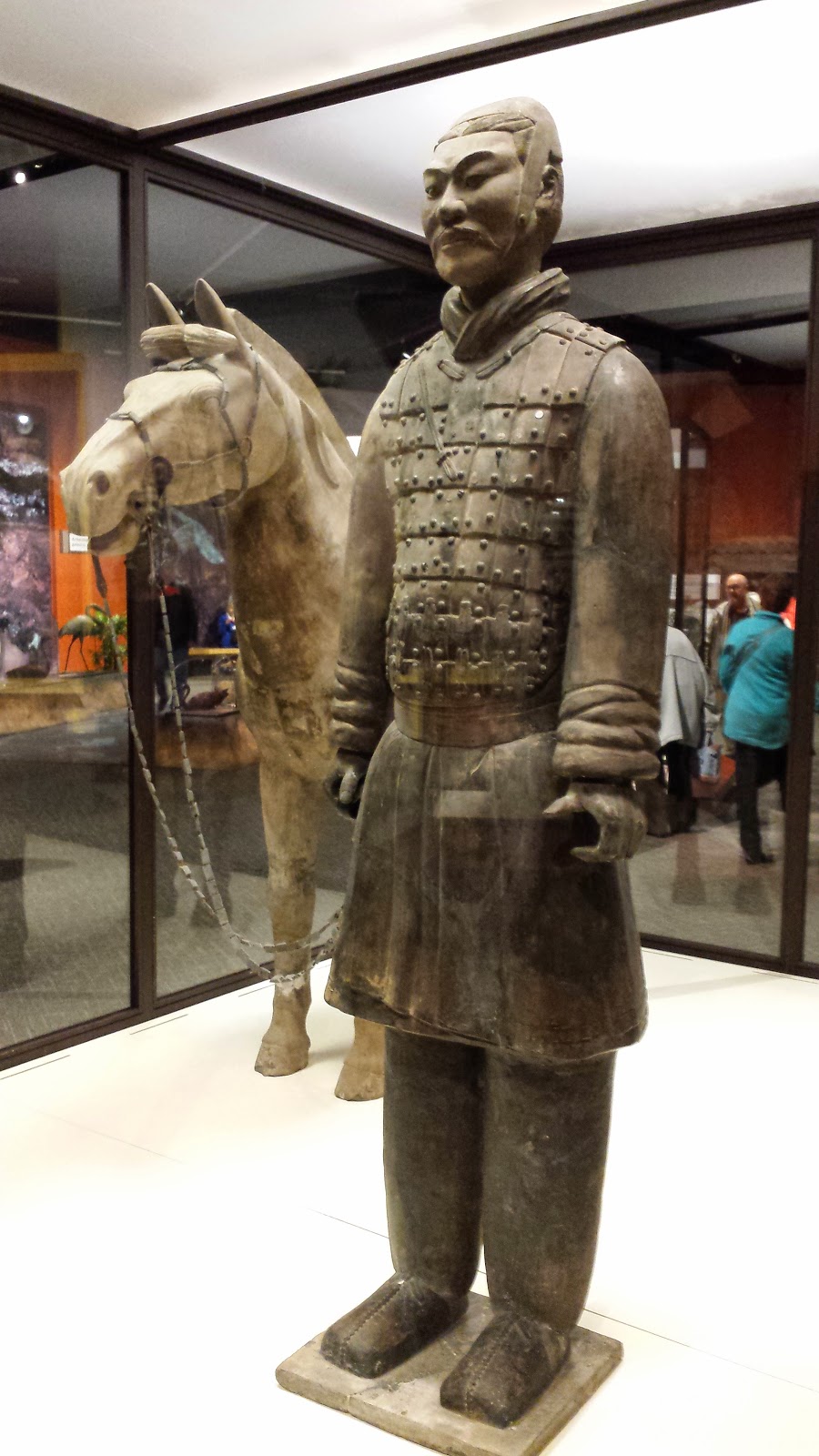 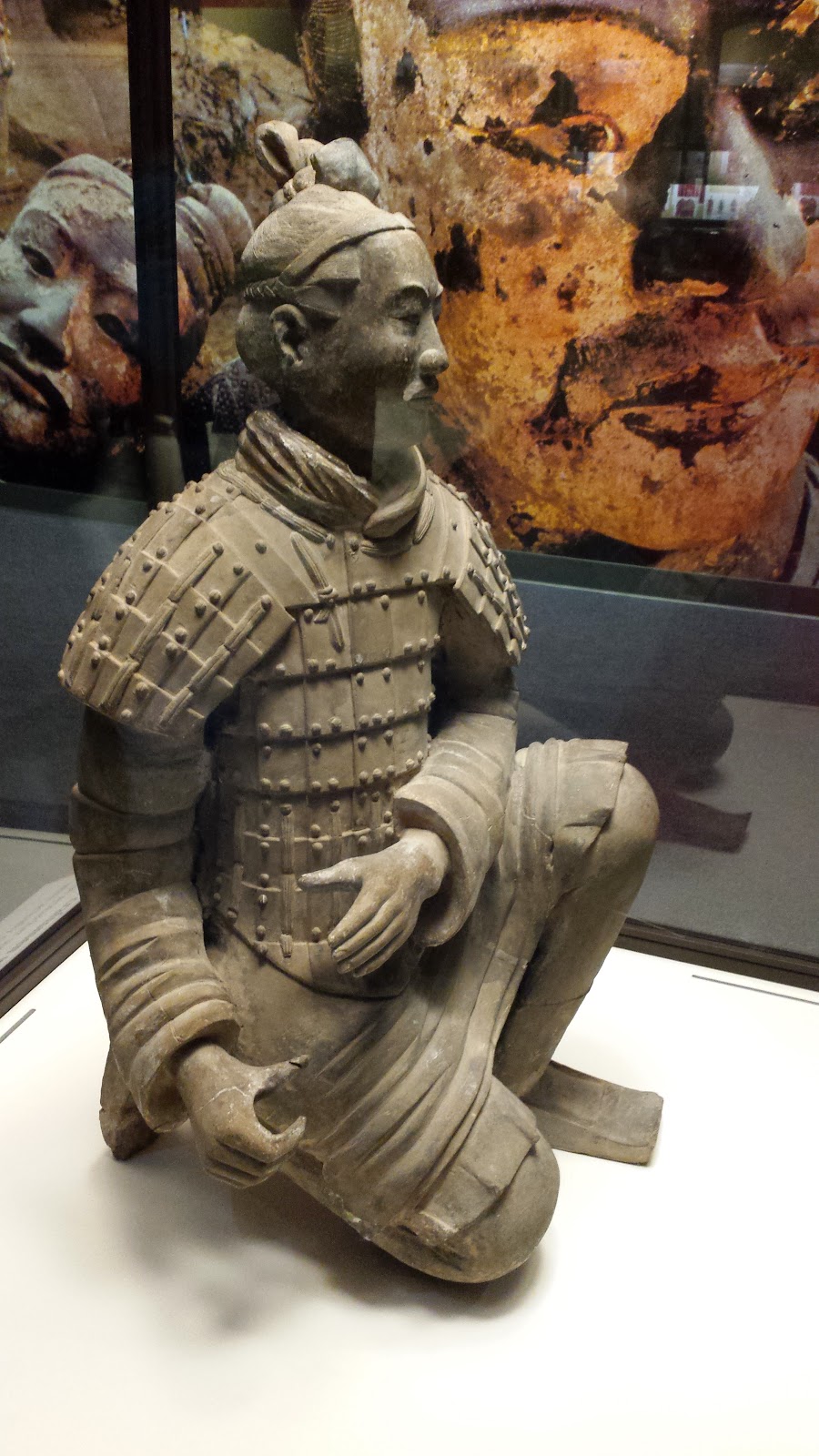 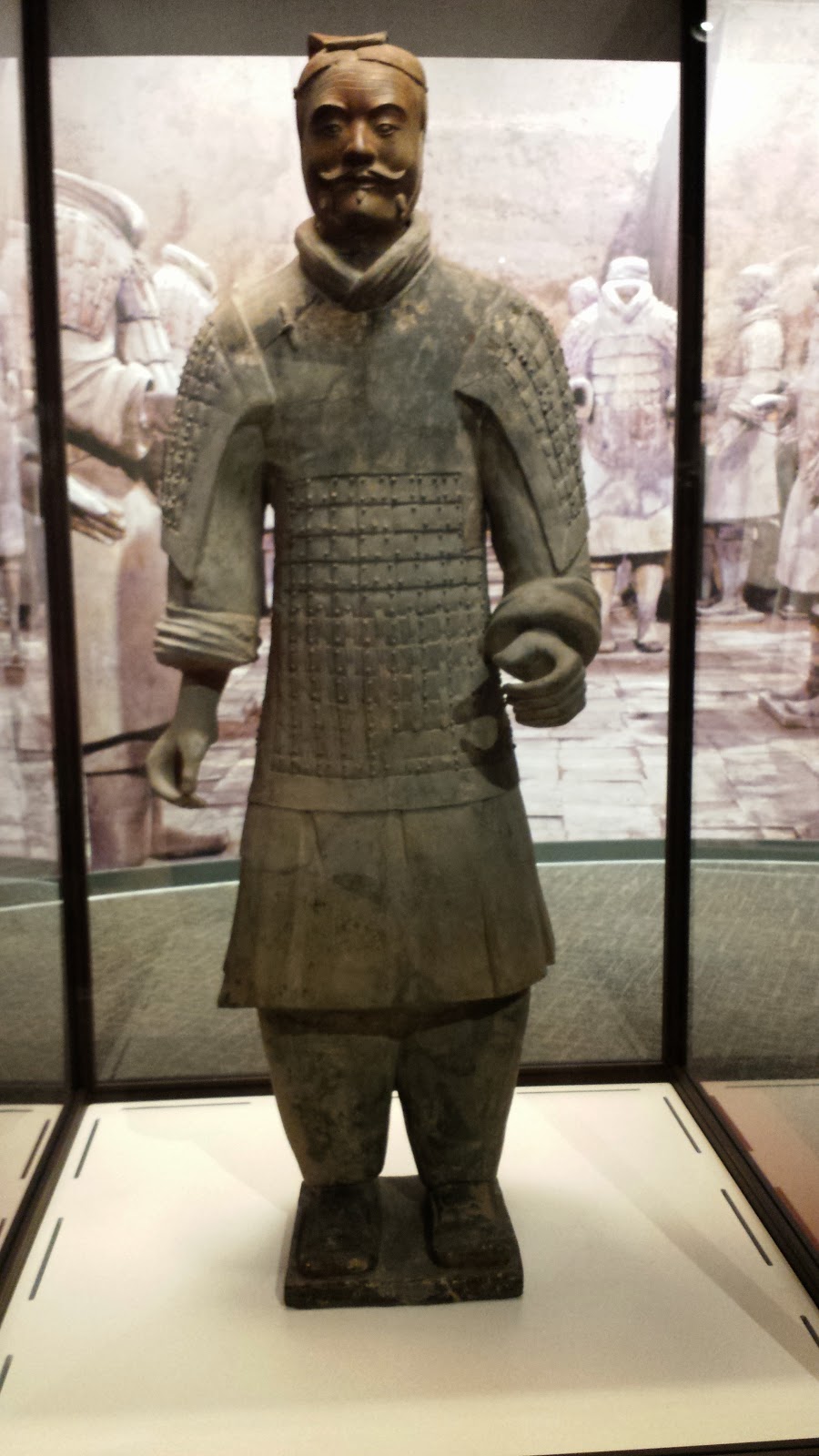 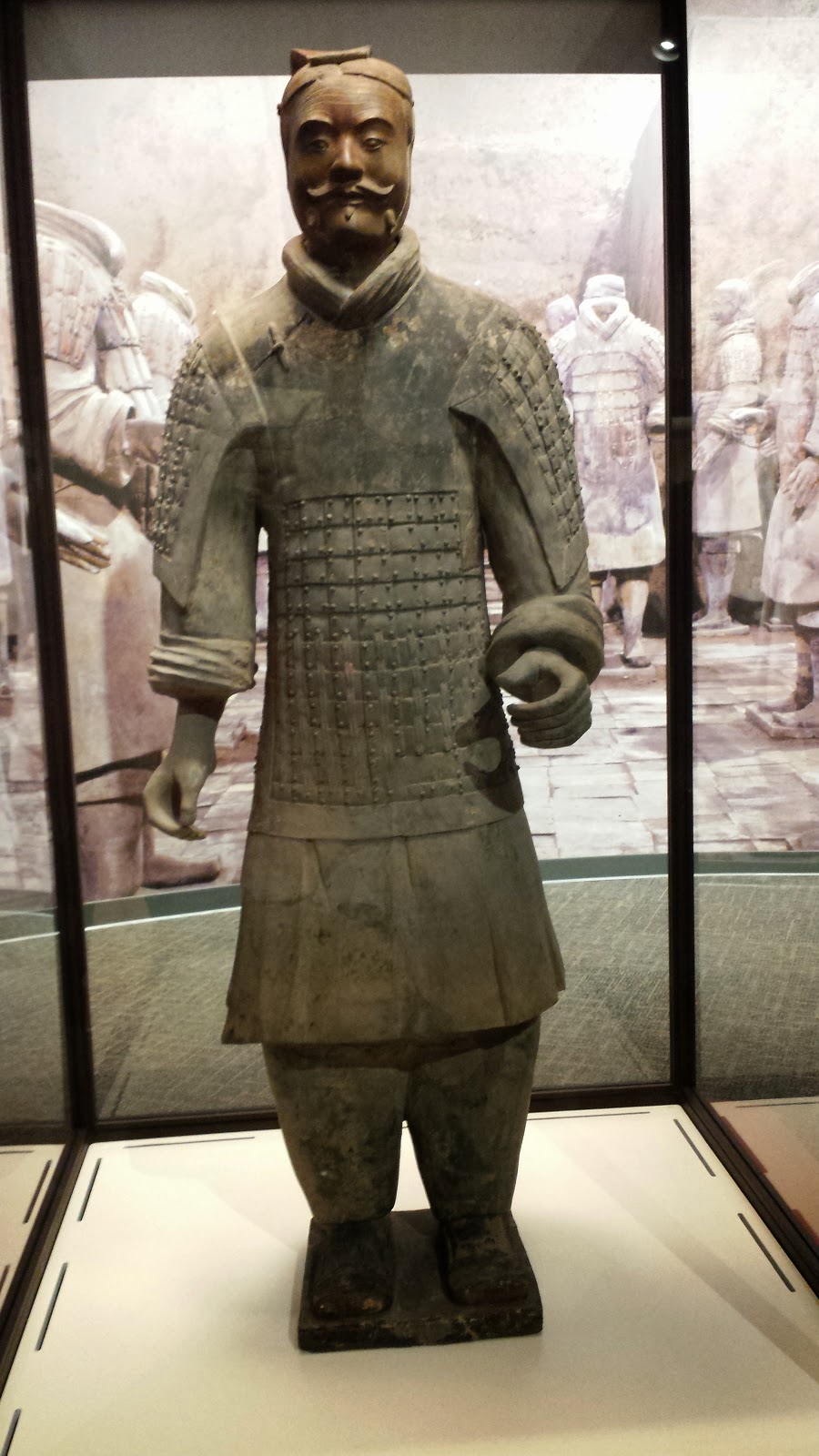 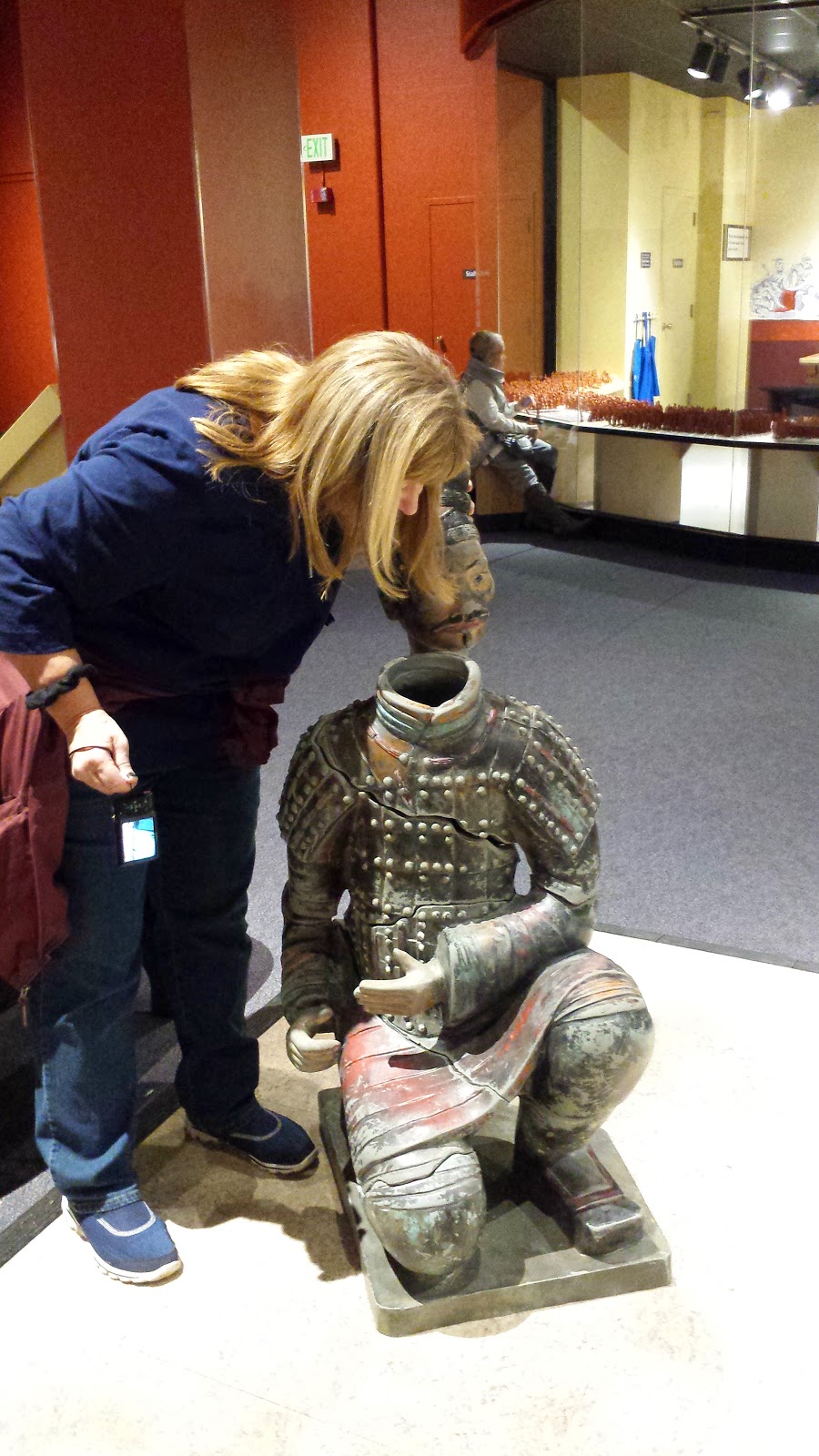 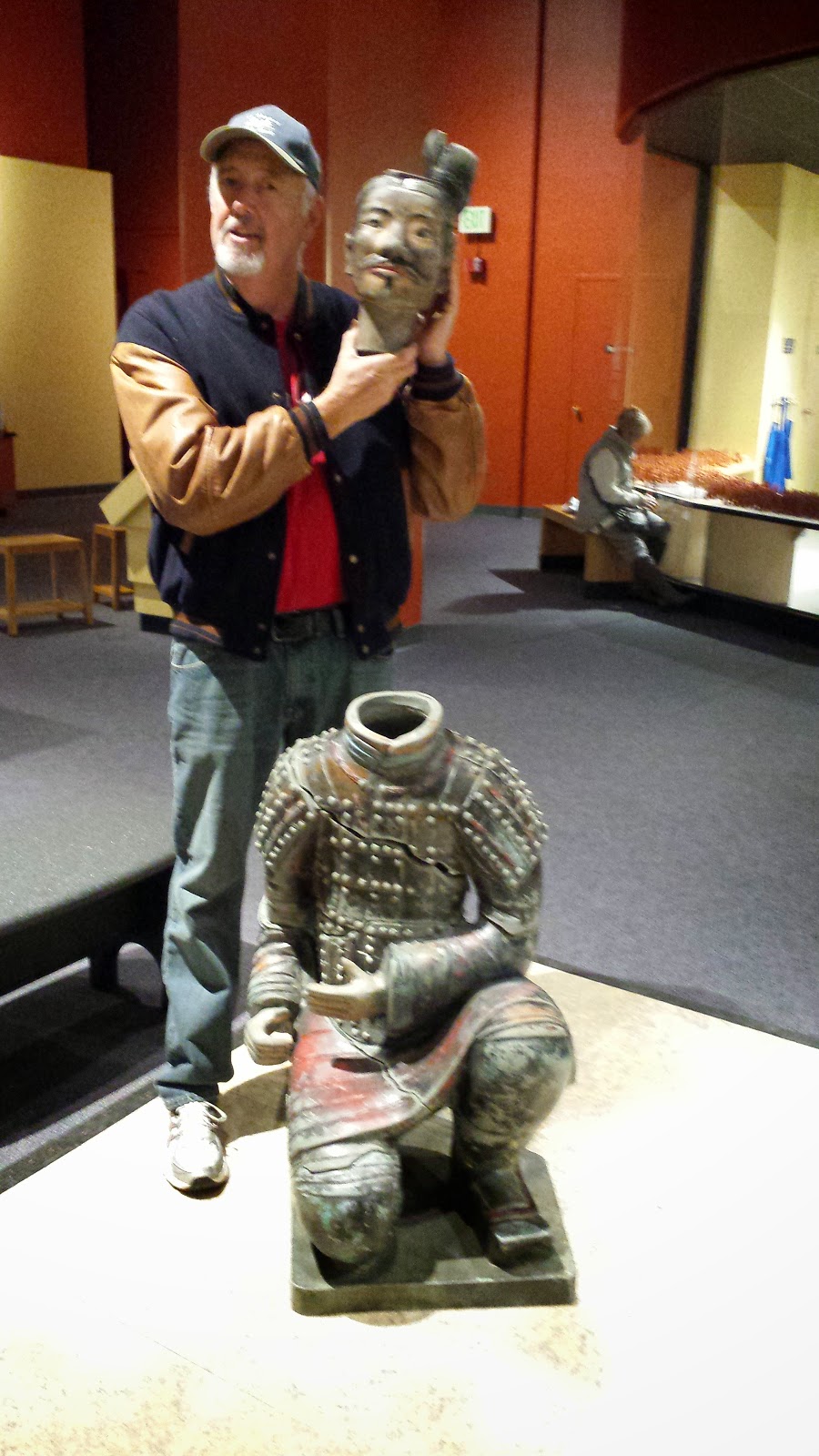 Since the race expo was open until 9:00 p.m. Friday, we had plenty of time to stay at the museum until it closed at 5:00 p.m. and then grab dinner before picking up our packets.  Since we were staying right by the expo and the start/finish line once we parked to go to the expo, we left the car parked the remainder of the weekend.

At the expo we received what a volunteer called a "personalized poster."  I didn't realize what this meant until the next day I opened the poster after the race (hence the bananas serving as paperweights).  I thought this was a nice touch and unique swag.


The race shirts were also unique, and they were from a company I had never heard of before, Alanic.

Picking up my packet was a breeze, so we spent time going up and down each aisle to check out the booths.  We ended up stopping and spending 10 - 15 minutes at the Geist 5K and Half Marathon booth.  We first learned about this race at the Indy 500 Mini Marathon expo and we decided that we would come back to Indy for this spring race in 2015, we just had not financially committed yet.  We talked to the race director about the course and we saw the medals but what finally made up our mind was the discounted price available only at the expo.  So now I am running the Geist Half Marathon in May 2015 for only $40 and even though this race is north of downtown Indy, technically in Fishers, we will still stay at the Crowne Plaza.


The last booth we stopped at was Medals 4 Mettle, which started in Indianapolis but has chapters all over the country and several in other countries.  I scanned their flyer for you to read.  I first heard about this organization through a co-worker who gave all of her race medals to the local St. Louis chapter.  At first, I thought she was crazy and then this spring I went to my first medal distribution at Children's Hospital.  The experience blew me away.  I am currently scheduled to go on my 2nd medal distribution November 30th, so I will tell you more about this organization after Thanksgiving. 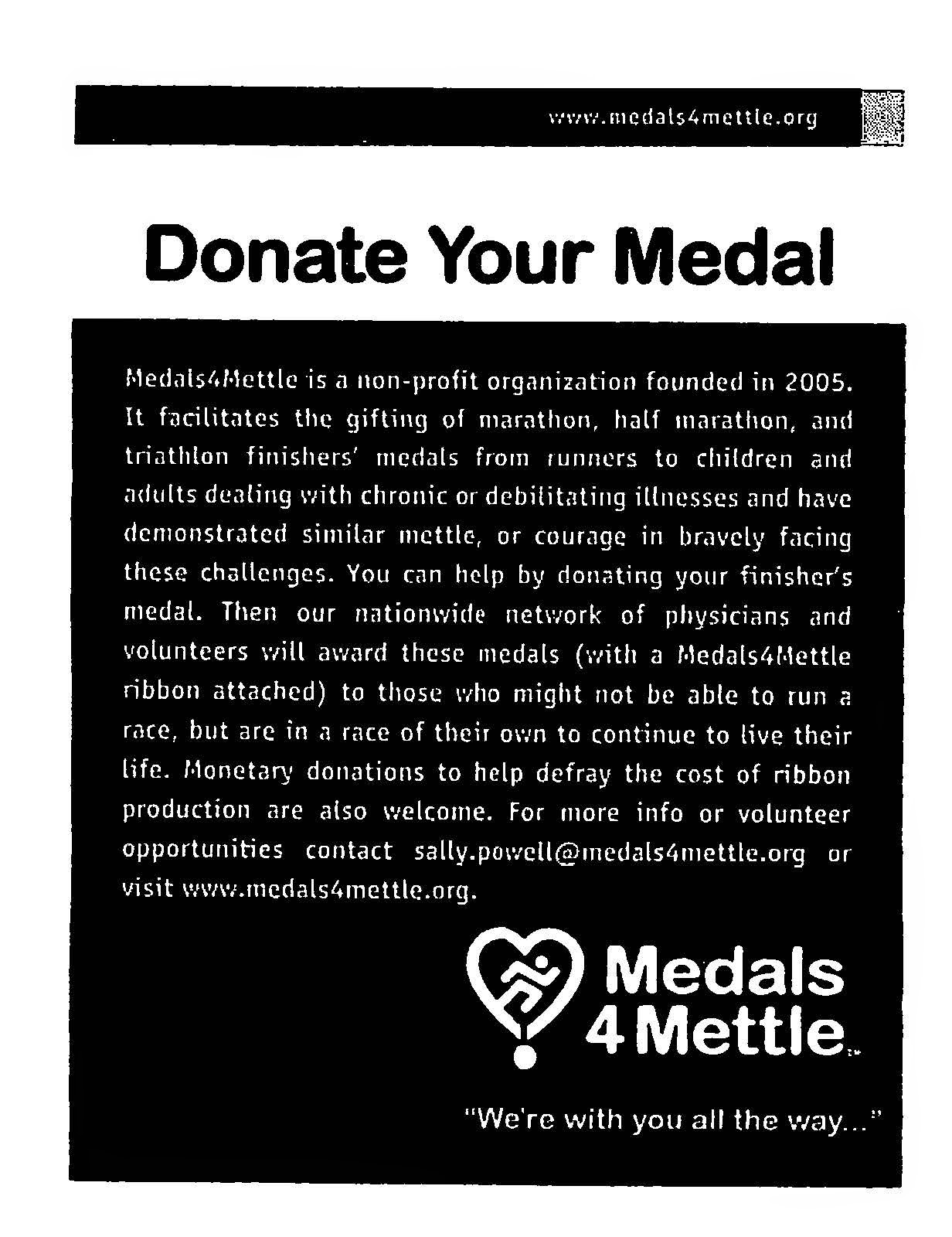 The rest of the evening was spent relaxing and laying everything out for race day.  Since the half marathon didn't start until 8:00 a.m. and the start line was a five minute walk from our hotel, we set the alarm for 6:30 a.m.  On race morning, we took the skyway from our hotel to the convention center and then over to another hotel that was at the start line.  There weren't really corrals at the start after the elite runner section, just pacers holding their signs, so you basically just fell in line with your pace.  Since there weren't corrals there was a rolling start with no break in between pace groups.  Whether you have corrals separated by several minutes or a rolling start, the first several miles will always be congested in a larger race so I really have no preference and didn't see much of a difference between this race and Rock 'n' Roll for example.

The beginning of the course wound us through downtown, and I literally mean that it wound us around and had quite a few turns within the first mile.  While we were still downtown I had to stop and take this photo because it literally made me laugh out loud! 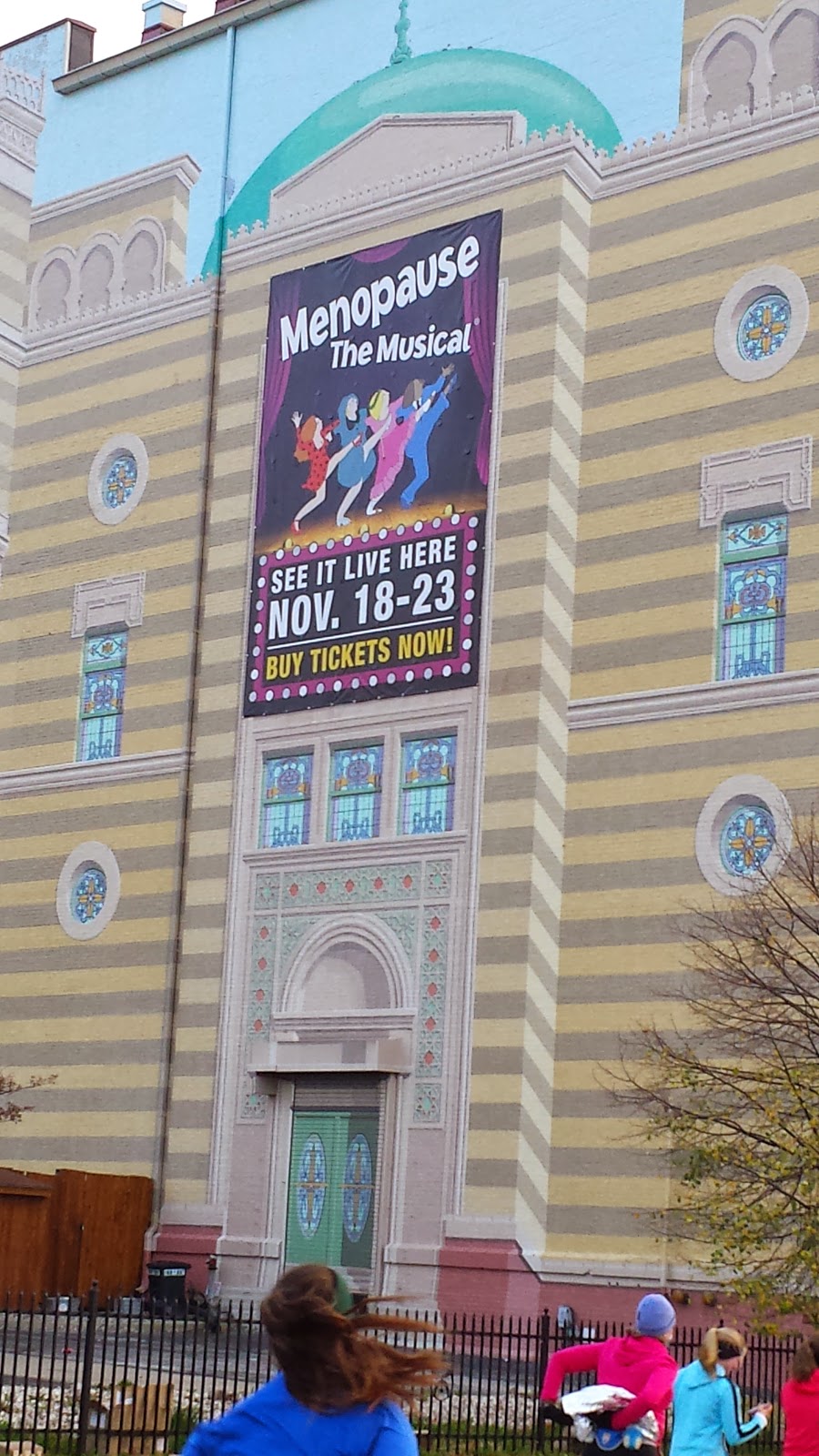 And then I had to stop and take this photo of the Indiana State Soldiers and Sailors Monument as we ran towards it. 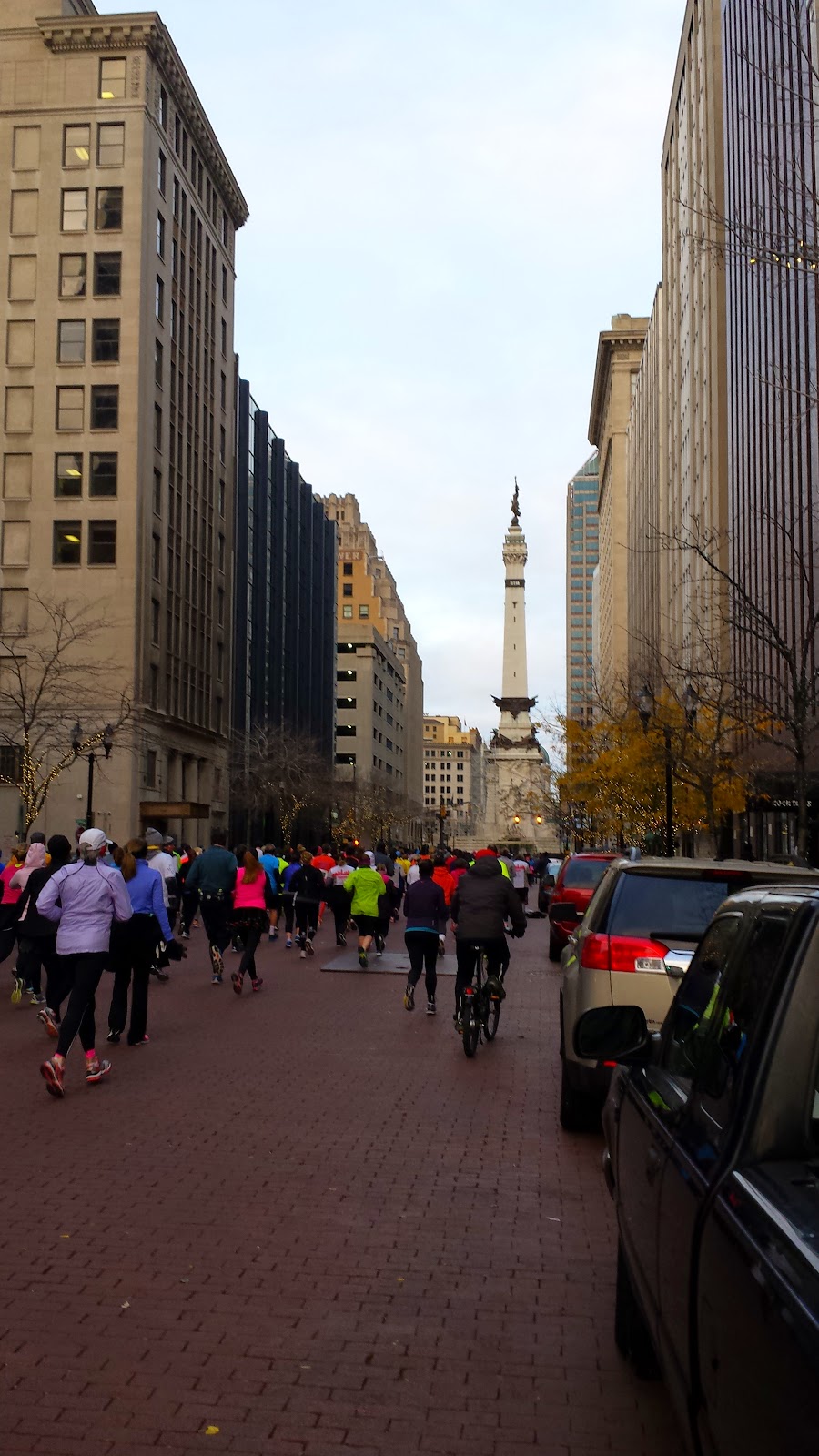 The remainder of the course ran us through the hip and trendy neighborhoods as well as several historic residential areas.  The only CONS I experienced at this race were that the water stop just past Mile 3 was out of water when I arrived and the text alerts, including the 5K alert, did not come until about 10 minutes AFTER I finished.  As a result, my parents went back to the hotel to wait for me rather than wait in the cold at the finish with no idea how close I was or how long they would have to wait.

But here are the numerous PROS: 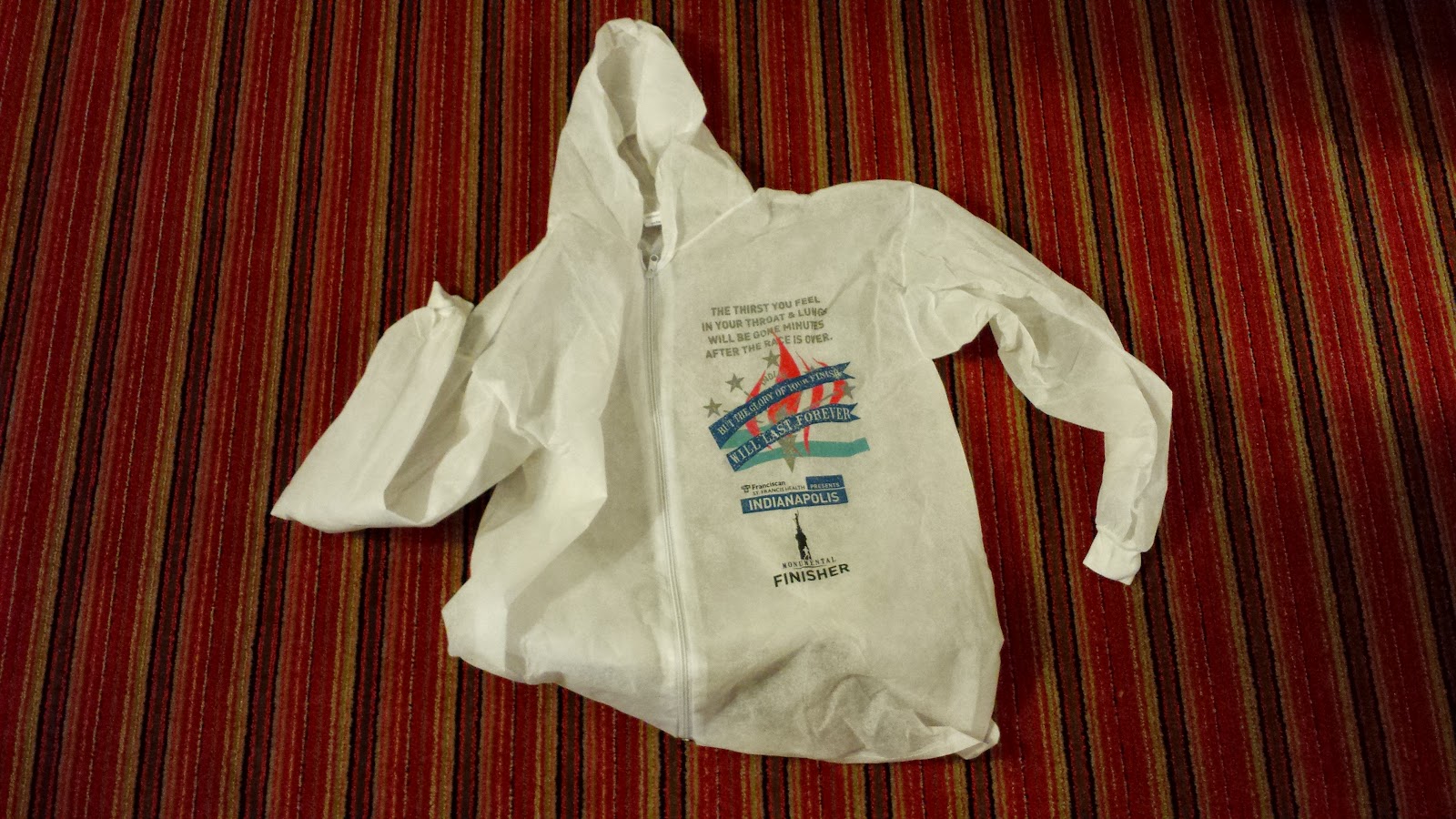 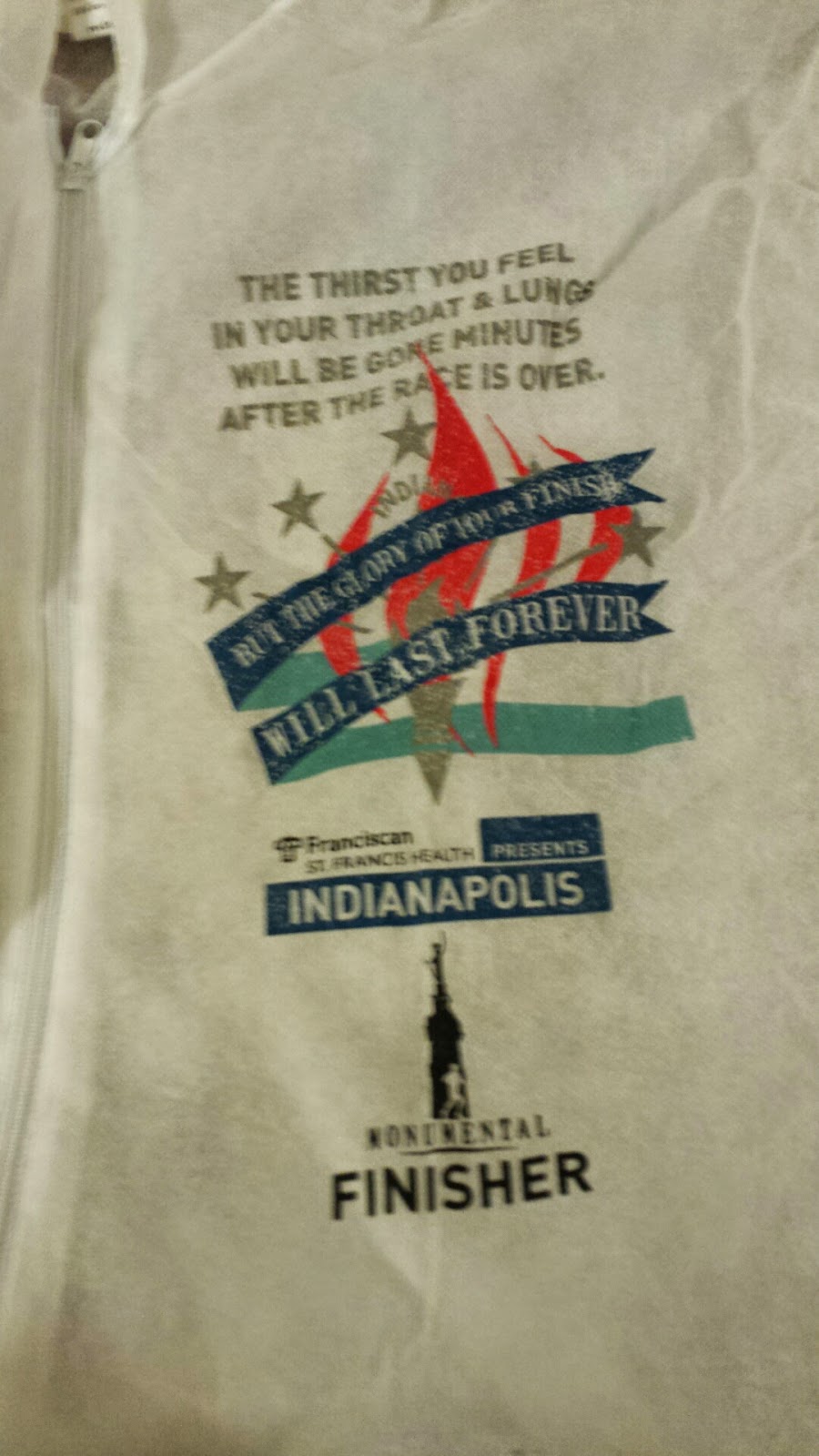 When I signed up for the Monumental Half Marathon on New Year's Day for the discounted price of $50, I never would have thought that I would be tempted to run it four years in a row.  What would tempt me to do such a crazy thing?  A four year medal series that I just happened to inadvertently become part of during the first year.  The half and full marathon medals for 2014 - 2017 will be the same size, just different colors (silver for the half and gold for the full). The four together will create a square and once you complete the series in 2017, you will receive a red and white star medallion that fits in the center, joining the four medals.  If you have run in all 10 Monumental races, you receive a frame that will hold the medals together.  I will have the option to purchase the frame IF I choose to complete the four year series.  I gave my parents a December deadline to decide if they were in for three more Monumentals so that I can register for 2015 on New Year's Day (for the best price again), but I think we are all planning on spending the first weekend in November for the next three years in Indianapolis! 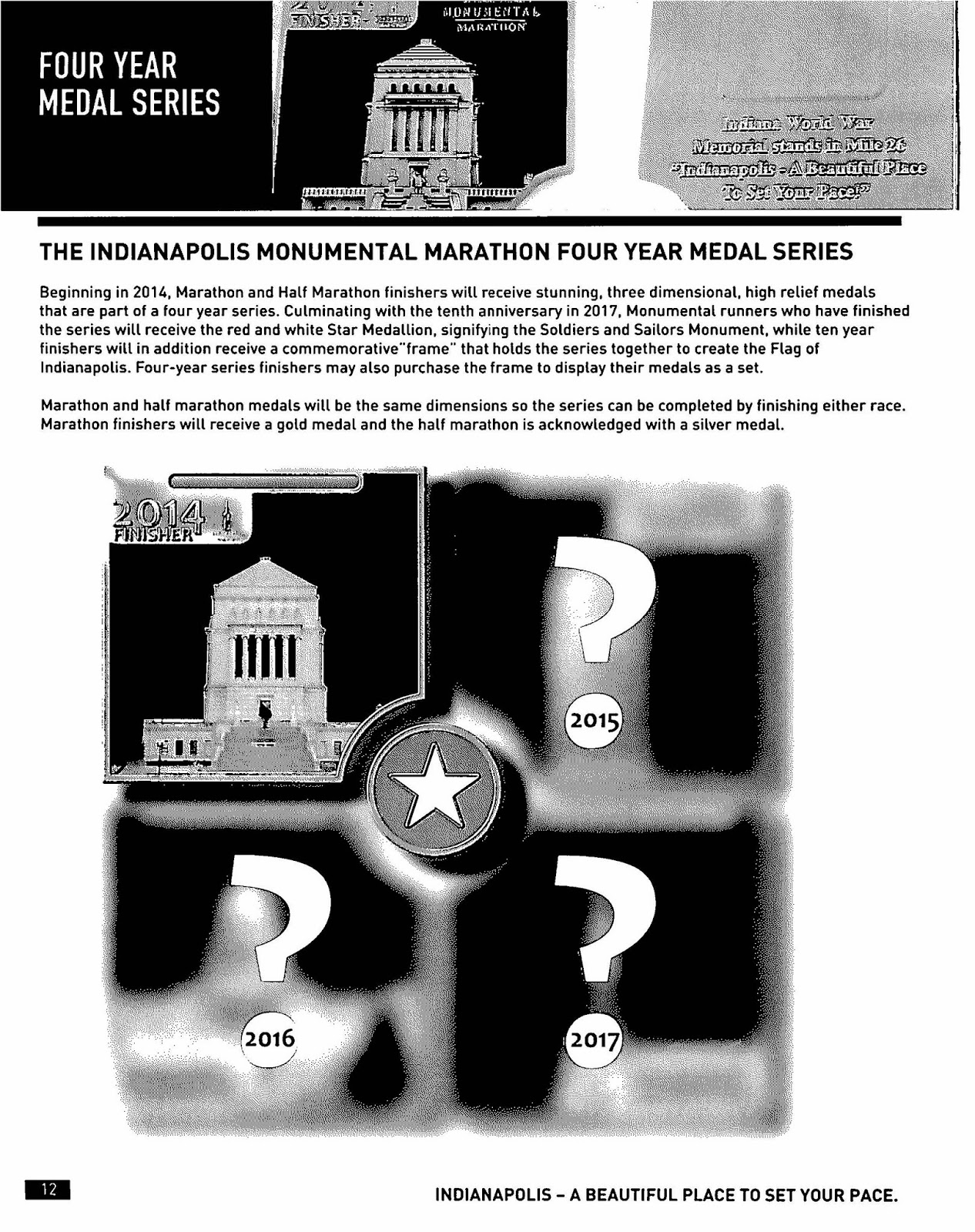