Even though this was my 4th time running the St. Louis Rock 'n' Roll Half Marathon, this was my first time running the half marathon as part of the Remix Challenge.  When I finished the half marathon in 2013, I had NO intention of running the race again in 2014.  But mid-year they offered such a great discount, that I couldn't say no.  A few months later, I upgraded to the marathon thinking I would be ready by October.  But sometime around the Disneyland races I decided that my schedule was just too packed to fit in the necessary training, so I downgraded back to the half marathon and lost $20 in upgrade fees in the process.  Somewhere in that time frame Rock 'n' Roll decided to offer an extra medal if you signed up for a 5K on Saturday in addition to your Sunday race.  Sold!

The expo started Friday, which was a very busy work day, but the Saturday 5K offered race day packet pick-up for the 5K only.  Yeah!  The 5K didn't start until 8:00 a.m. and packet pick-up started at 6:30 a.m.  Somehow I completely overestimated how long it would take me to get downtown, so I ended up parking in the Union Station parking lot at 6:00 a.m. with time to kill.  Once 6:30 a.m. hit, I retrieved my packet which included the race bib, timing band, Remix Challenge wristband, and the tech t-shirt below. 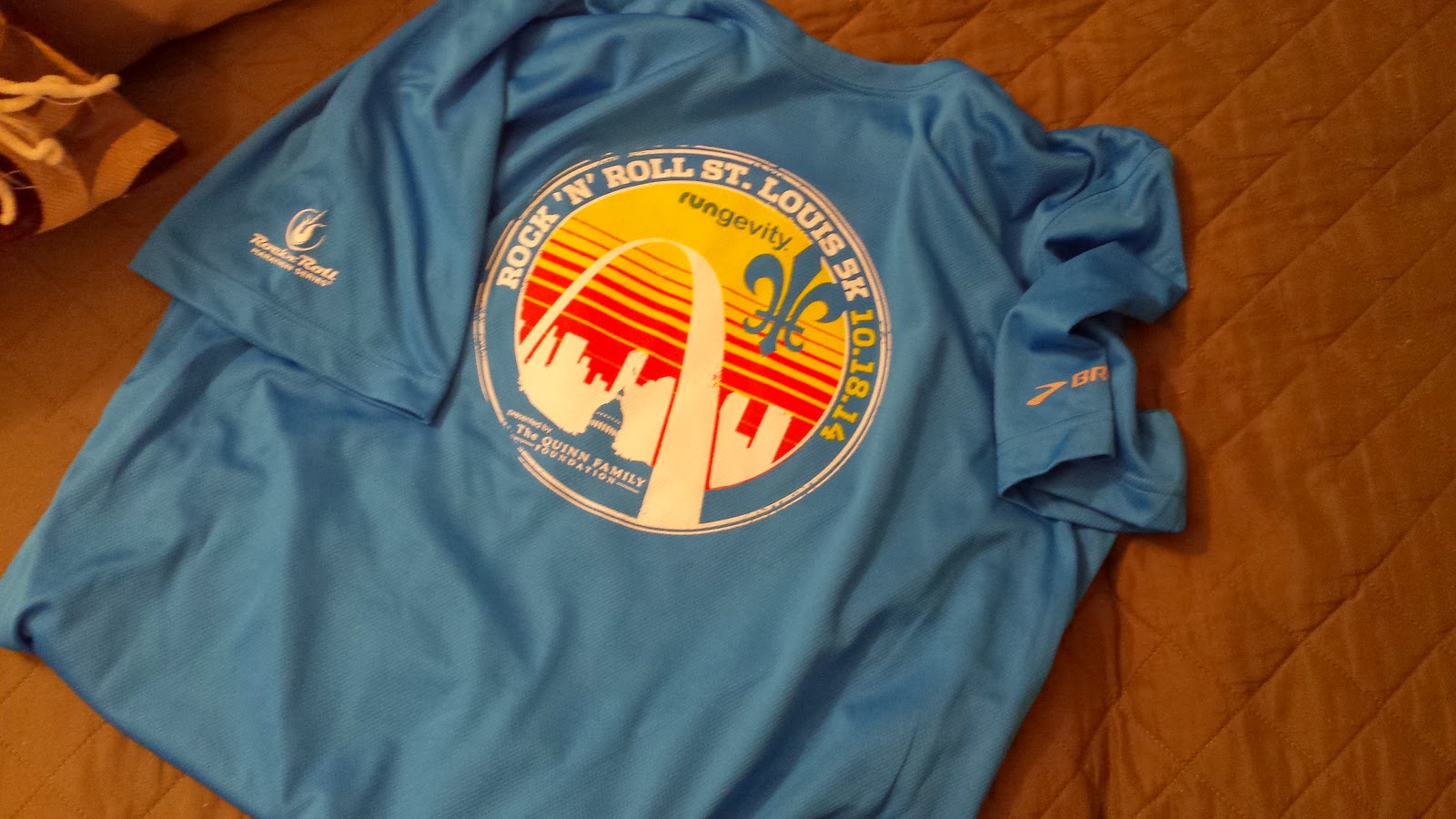 Start time came quickly and before I knew it, we were running.  I was conservative with the 5K knowing I was running the half marathon the next day, but plenty of runners finished after me, so I was happy.

At the finish line I grabbed my medal, a bagel, a bottled water, and then I headed straight for the car.  Although this 5K was one of the larger 5K's I have run, there wasn't any traffic congestion created by the runners and spectators, so I was back home taking a nap before I knew it.  Saturday afternoon I went back into the city to walk through the expo and to pick up my half marathon packet.  Maybe you already saw this on Facebook, but I fell in love with this shirt in the "official" race merchandise area.  The love was immediate, so I had to make it mine. 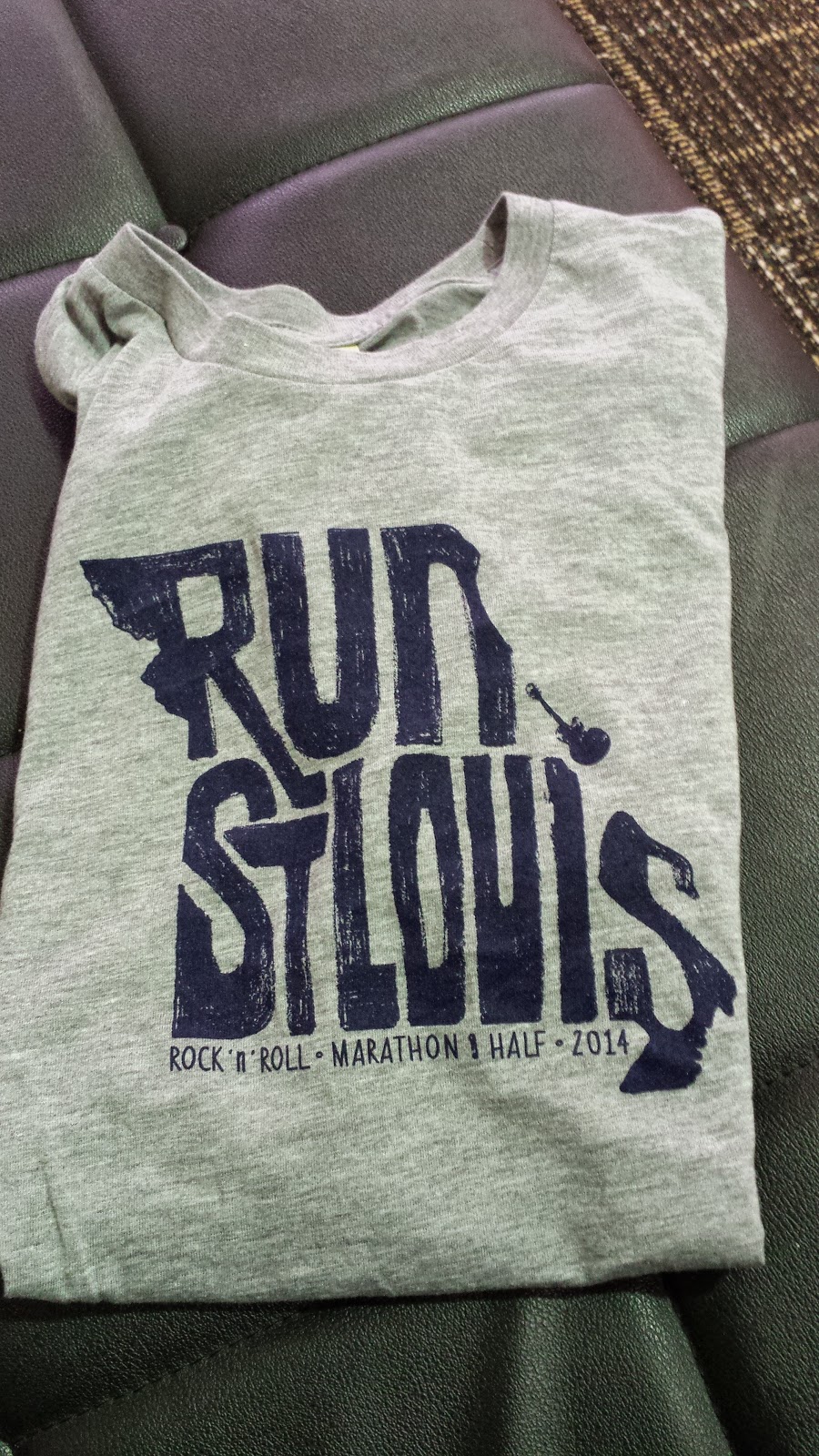 If I am remembering correctly, the first St. Louis Rock 'n' Roll race in 2011 had white tech shirts.  I can't find the 2011 shirt (probably because it was a white tech shirt), but I still have 2012 and 2013 so I placed them next to the 2014 race shirt below.  I like the way they played on local St. Louis baseball culture for the 2014 shirt.
Sunday's race started at 7:00 a.m. and I had to find a different lot to park in due to the half/full marathon course and road closures, so I went to bed early knowing it would be an even earlier morning the next day.  For the half marathon, I ended up parking near Busch Stadium (a.k.a. Baseball Heaven) because I knew we would be running through this part of town between miles 1 and 2 so the streets would be open again by the time I was finished.  There were plenty of open space in this parking garage as well as the Ballpark Village surface lot so if the course stays pretty much the same next year, I would recommend parking near Busch to avoid post-race congestion.

I decided that I was going to listen to music during this race so I only took one photo the entire race.
Race day #2 was gorgeous and the temperature was ideal.  We ran through neighborhoods like the Grove, Washington Avenue, Lafayette Park, Grand Center, around the SLU campus, Compton Heights, and Shaw.  In the end, I was an unbelievable 16 minutes slower this year than last.  Ugh!!!!  I think I know what caused this, and I am addressing it now.  More about that in a later post.

At the finish line (once I finally made it) I received my half marathon medal.  After proceeding through the food and beverage area I exited to obtain my Remix Challenge medal.  There was no line at all for this other medal, none.  Just one very happy, and excited volunteer.  She cut off my Remix Challenge armband and gave me the extra medal, complete with a big smile and a sweet "congratulations!"

I would say the pros were the race shirts that really played up the St. Louis culture, the medals (the half marathon medal was actually pretty heavy), and the ease of getting in and out of downtown both race mornings.

Cons:  The race bag this year was a generic Rock 'n' Roll race series bag, while last year's was St. Louis specific.  I still have my bag from last year as well as the city-specific bag I received at Rock 'n' Roll USA.  I am not sure if they are doing this in all cities to save money or if it was just St. Louis, but I know that they have had to cancel races in other cities, so maybe it was a cut they made to save money.
Another con, the overabundance of emails I received leading up to race day.  Even when I ran four races in four days at Disney World, I didn't receive a email for each race.  I maybe received two or three emails with links to the forms I needed to sign and the race information packet.  Yet for this race weekend that only included two races, I received:

I am now receiving emails about ordering photos and signing up for 2015.  Ahhh!  Even though all of this information was included in the runner packet that you could access through a link in one of the first emails, I still received emails giving me the same information again.  I have run races where I don't hear anything after I receive my registration receipt, but this was the only time I have felt like a race over-communicated their information and I don't remember this happening last year.