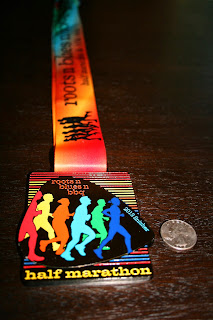 Yesterday I ran the Roots, Blues, and BBQ Festival Half Marathon in Columbia, MO.  I had originally had my eye on another September half marathon to be my first of the season but I saw pictures of their 2013 medals and I was less than impressed.  I chose this half to be the first race of the fall season.  I had paid for this race one to two months ago, yet I allowed too many distractions to come into my life and derail my training. Even the week of the race I was ill for two days yet I did not want to lose the money I had invested, so I was determined to run under-trained and not at 100%.  Needless to say I was nervous Friday night and Saturday morning.  My stomach was in knots and I hardly slept Friday night.  It wasn't until I was at the start line that I got really excited.  I told myself that regardless of what happened to my training, I could finish this race.  I would walk if I needed to, but I would finish and get that medal at the end.

So here is my rundown of the race:

So today I am sore, very sore but this race has gotten me excited for the fall race season!