I'm back and slower than ever!

Back in January, I started talking to my mother about where we would go for our mother-daughter race-cation this year.  We had tentatively chosen a June race in Kansas City until I received an email about the Baltimore Running Festival celebrating their 20th anniversary .  My very first half marathon in 2009 was at the Baltimore Running Festival and I had wanted to run it again in 2019 to celebrate my ten years of running, but I couldn't make it happen due to my lack of training and my crazy schedule.  I thought going back to Baltimore to run a half marathon for their 20th anniversary, staying in the same hotel in the Inner Harbor, and eating amazing seafood sounded amazing!  Then COVID-19 hit and the world changed.  We canceled our Baltimore hotel back in March and luckily I had not registered for the half marathon yet. I started working from home and since my commute became non-existent, I was able to walk every morning before starting my work day.  Walking at least a 5k daily eventually led to the need for a new pair of Brooks Adrenalines, which made me want to run again.

In 2019 I completely walked the two half marathons that I finished and I did not register for any races after June last year.  I had gotten so slow due to weight gain and I wasn't motivated to train for a race of any distance.  But something this spring re-energized me.  I was getting motivated by all the miles I was walking and I kept wanting to walk longer every day or even multiple times a day.  With most races being converted to a virtual format I started looking at virtual 5k's, but I knew that I needed to take the time to properly train this time.  I ended up downloading a Couch to 5k training app and LOVED it, but it stopped working about four weeks in.  I Googled similar plans and just chose one that I liked and would end the week of Independence Day. My goal was was the virtual America's Birthday 5k, which is normally held in downtown St. Louis on Independence Day before the parade.
Training started off well and the weeks flew by.  When my Couch to 5k app stopped working I could have made that an excuse to quit too, but I had re-fallen in love with running by that point so I found a new plan to follow thanks to Google. We had an amazing Spring in Missouri this year, but the temperature and humidity jumped up in June and has only been going up since.  I HATE running in the summer heat and humidity.  I just wilt in the heat and if I don't start running before 7 a.m., I just won't run outdoors that day.  My body just won't let me do it.  I will still go for a walk, but my body just hates running in that environment.  But just as the temperature and humidity were going up, the gym in our complex finally re-opened by appointment only.  I suddenly found that I really enjoyed running on the treadmill and wished that I had my own so that I could run longer than a one-hour appointment allowed me.  So by the end of June, I was consistently running outdoors or indoors between three and five days per week!
As Independence Day weekend approached, we had a socially distanced department lunch at a co-workers house.  Her house was adjacent to a park in St. Ann, MO.  Before that lunch I had no idea where I was going to run my virtual 5k but as I left her house, I texted another co-worker to see if she would want to run a 5k with me at that park on Friday, July 3.  It had been a while since I had run with that co-worker (we had run the University City Memorial Day 10k in 2019 together but I didn't blog about it), but she immediately agreed to meet me at 7 a.m. to try to beat he heat.
With the America's Birthday 5k going virtual, you had from July 1st - July 7th to complete your 5k.  Technically I completed two: one indoors on a treadmill and one with my co-worker, outdoors on July 3rd. I wanted to see what the time difference would be when you factored in real hills, heat, humidity, and socializing. To my surprise, there was not a major difference between the two.
I completely ran my indoor treadmill 5k at a fairly slow and comfortable pace, and I did add some rolling hills for a finish time of 42:49, which averages out to a 13:47 pace.

For my outdoor 5k, I alternated between jogging and walking with my co-worker.  The park had rolling hills and it was HOT and humid that morning.  Our finish time was 44:40 for an overall pace of 14:25.  I was surprised that there was not more of a difference since we walked quite a bit, but we must have been running at a faster pace than I usually run on the treadmill to make up for that time. 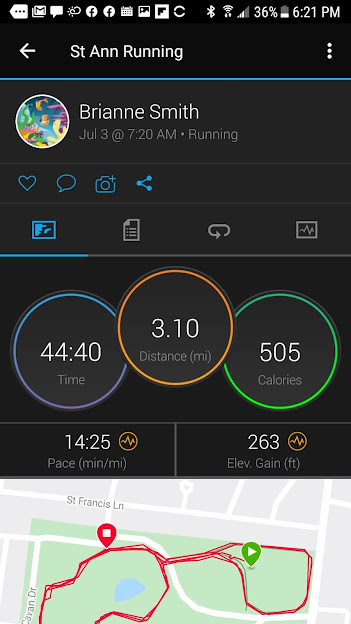 After our 5k, we walked another mile to cool down and explore other areas of the park.  The park was really a hidden gem with several water features, beautiful landscaping, several paved paths, plenty of parking, and it was very quiet that morning and not packed with people. 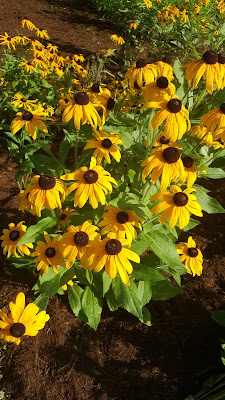 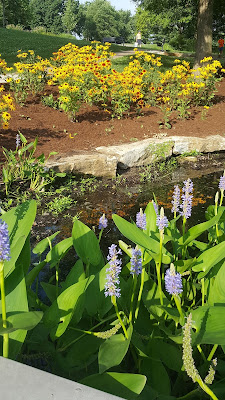 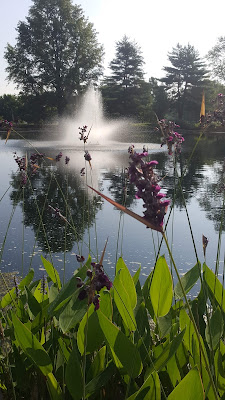 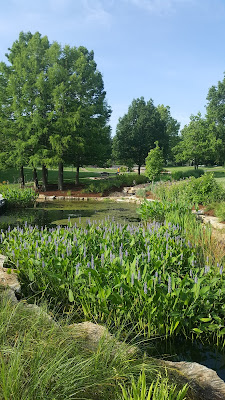 I also brought my virtual bib and medal along to take a picture of in the park post-race: 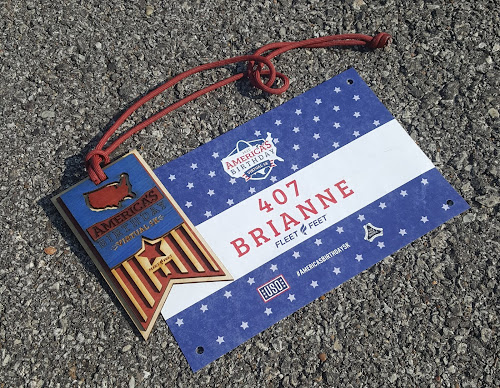 The race director sent out several emails leading up to the race so that participants would stay motivated and know how to submit their results.  I'm really glad that I found this virtual 5k to complete my Couch to 5k training and I am so glad that I pulled in a co-worker to run with me at the last minute.  I am certain that my outdoor 5k time would have been even slower had she not been there with me!  Even though both my indoor and outdoor finish times were slow, I am now able to see where my current fitness level is and then hopefully improve and stay motivated going forward.
So I am slower than ever, but I am finally back running again!!!
Posted by Bree at 10:52 AM